The 1918 pandemic was linked to a rise in Nazi support. Will this pandemic be similar?

As with coronavirus, the 1918 flu led to a rise in xenophobia and budget cuts. Then it helped usher in Nazi rule 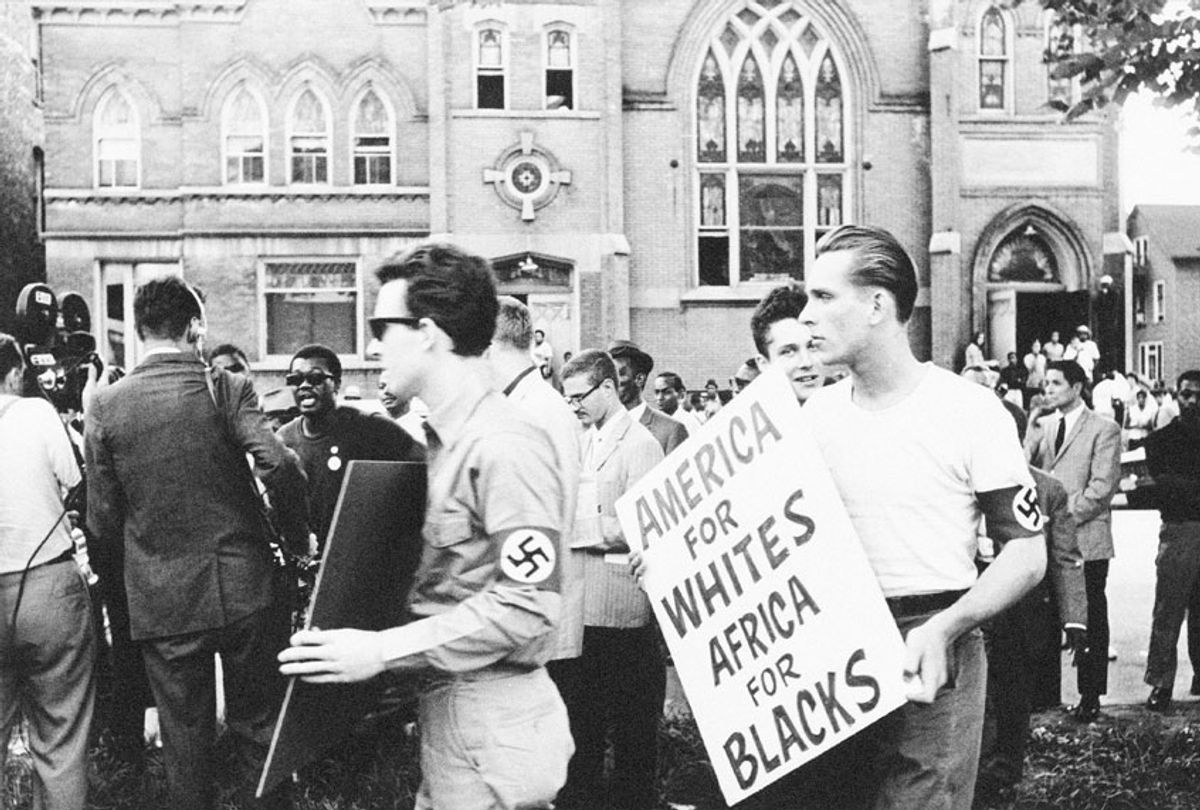 Members of the American Nazi Party march with signs across the street from the Greater Mount Hope Baptist Church on the south side of Chicago, Ill. on, August 19, 1966 (AP Photo/ Larry Stoddard)
--

A new study by an economist at the Federal Reserve Bank of New York linked the 1918 flu pandemic to the rise in Nazi support in Germany, a finding that could have significant relevance as the United States and the world grapples with the health and economic devastation wrought by the coronavirus.

Experts have frequently compared the current health crisis to the 1918 pandemic, which killed an estimated 50 million people worldwide. A new report by Kristian Blickle, an economist at the New York Fed, suggests that along with high death tolls and an economic downturn, the 1918 flu also correlated with the rise in support for extremist right-wing parties, particularly the Nazis, in regions with the highest death rates.

Though historians have often pointed to Germany's defeat in World War I and dissatisfaction with the post-war Weimar Republic as paving the way for the rise of the Nazis, the Fed study found that "influenza deaths are correlated with the share of votes received by extremist parties in 1932 and 1933."

The trend particularly favored right-wing extremist parties, Blickle noted. While extreme left parties, like the Communist Party, saw their vote share decline, the Nazi Party, the "clear party of the extreme right," saw gains in support in regions with the highest death rates.

The study looked at vote shares in different regions of Germany in the wake of the pandemic, which killed an estimated 287,000 people in Germany alone.

"The particular strain of influenza that raged in 1918 to 1920 largely affected younger people and thereby reshaped demographics," the report said. "Regions most heavily affected lost a relatively larger share of their youth, which compounded the effects of the war. This may have changed the development of societal attitudes going forward."

The age groups affected seems to be the major difference between the 1918 flu pandemic and the current pandemic, which is more likely to be deadly to seniors.

In the case of the 1918 pandemic, these trends were evident even when controlling for various other factors.

"This holds even when we control for a city's ethnic and religious makeup, regional unemployment, past right-wing voting, and other local characteristics assumed to drive the extremist vote share," Blickle wrote. "The deaths brought about by the influenza pandemic of 1918-1920 profoundly shaped German society."

The pandemic was unique, and other illnesses were not linked to similar trends.

"Tuberculosis was still rampant and a cause of death for many people during and immediately following the first world war," Blickle said. "In fact, it killed a similar number of people as influenza in 1918. However, mortality from tuberculosis was a well-established part of life in the early twentieth century."

The virus, frequently referred to as the "Spanish flu" even though it likely originated at a military base in the United States, also gave rise to xenophobic attitudes toward foreigners.

"Given the virus' perceived foreign origins, it may have fostered a resentment of foreigners who were seen as responsible for the pandemic," Blickle wrote, adding that the vote share for right-wing extremists particularly increased in "regions that had historically blamed minorities, particularly Jews, for medieval plagues."

The study also found that reduced spending following the outbreak contributed to the rise in extremist voting.

"Clearly, austerity has an influence on extremism even in the face of the influenza pandemic," the report argued. "However, it is also evident that changes in regional spending are not the only channel through which influenza mortality affects voting behavior."

The report did not argue that the pandemic led to Nazism, since many other countries that suffered high flu deaths did not move rightward. However, Germany was particularly affected because it "suffered a high number of influenza deaths."

"Given a number of econometric challenges, we are cautious about the interpretation of our results," Blickle acknowledged. "Nevertheless, the study offers a novel contribution to the discussion surrounding the long-term effects of pandemics."

Though the study looked at effects in the years following the pandemic, there are already signs that the United States and other countries could experience a period not unlike the one that followed the 1918 pandemic.

The US has by far the highest number of confirmed coronavirus cases in the world, reporting more than 1.25 million cases and more than 76,000 deaths as of Thursday.

The pandemic has led to an increase in xenophobia toward Asian Americans. Roughly one in three Americans, and about 60% of Asian Americans, said they have witnessed people blaming Asians for the health crisis in a recent Ipsos survey.

There have been increasing reports of attacks targeting Asian Americans across the country and colleges have reported a rise in attacks on Asian and Asian American students.

President Donald Trump and his administration have contributed to the rhetoric, labeling the current illness the "Chinese virus," the "Wuhan virus," and reportedly even the "Kung Flu."

Trump has pushed a conspiracy theory that the virus originated in a lab in Wuhan despite intelligence agencies pushing back on the claim. Michael Caputo, a longtime Trump adviser who was recently appointed as the spokesperson for the Department of Health and Human Services, tweeted that "millions of Chinese suck the blood out of rabid bats as an appetizer and eat the ass out of anteaters" among a number of racist tweets he has since deleted. Sen. Tom Cotton, R-Ark., argued that Chinese students should be banned from studying science at American colleges.

Trump has also used the crisis to advance his anti-immigration agenda and undermine global agencies.

The Royal United Service Institute, a British-based independent think tank, reported last week that far-right groups have attempted to exploit the current crisis by "promoting disinformation and conspiracy theories to enhance their anti-immigrant or anti-government agendas and attract a new range of followers."

The US could also face a period of austerity on the local, state, and federal levels. Republicans are already pushing to cut unemployment benefits to the more than 30 million people who have lost their jobs amid the crisis. Trump and Republican leaders have also come out against providing aid to states and local governments to alleviate their massive budget shortfalls.

"If we don't get federal assistance, you're looking at education cuts of close to 50 percent in the state of New York," New York Gov. Andrew Cuomo warned last month, adding that cuts would also hit police, firefighters, and health workers. "How ludicrous would it be to now cut hospital funding from state governments?"

As the country deals with a rise in xenophobia and possible austerity measures, the current pandemic has also helped far-right groups ramp up recruitment, particularly among young people.

The lockdowns across the country create a "perfect storm for recruitment and radicalization" by far-right groups, Cynthia Miller-Idriss, an American University professor who heads the extremism research lab PERIL, told NPR. "For extremists, this is an ideal time to exploit youth grievances about their lack of agency, their families' economic distress, and their intense sense of disorientation, confusion, fear and anxiety."

Brad Galloway of the anti-extremist group Life After Hate agreed that it was important to combat the explosion in far-right recruitment efforts amid the pandemic.

"They prey upon any kind of societal or community division," he told Time. "Right now people are pretty fragile, and this is the time that they will try to take advantage."