Take "The Great British Bake-Off," replace flour with flowers, and voila. If only watching were nearly as delicious 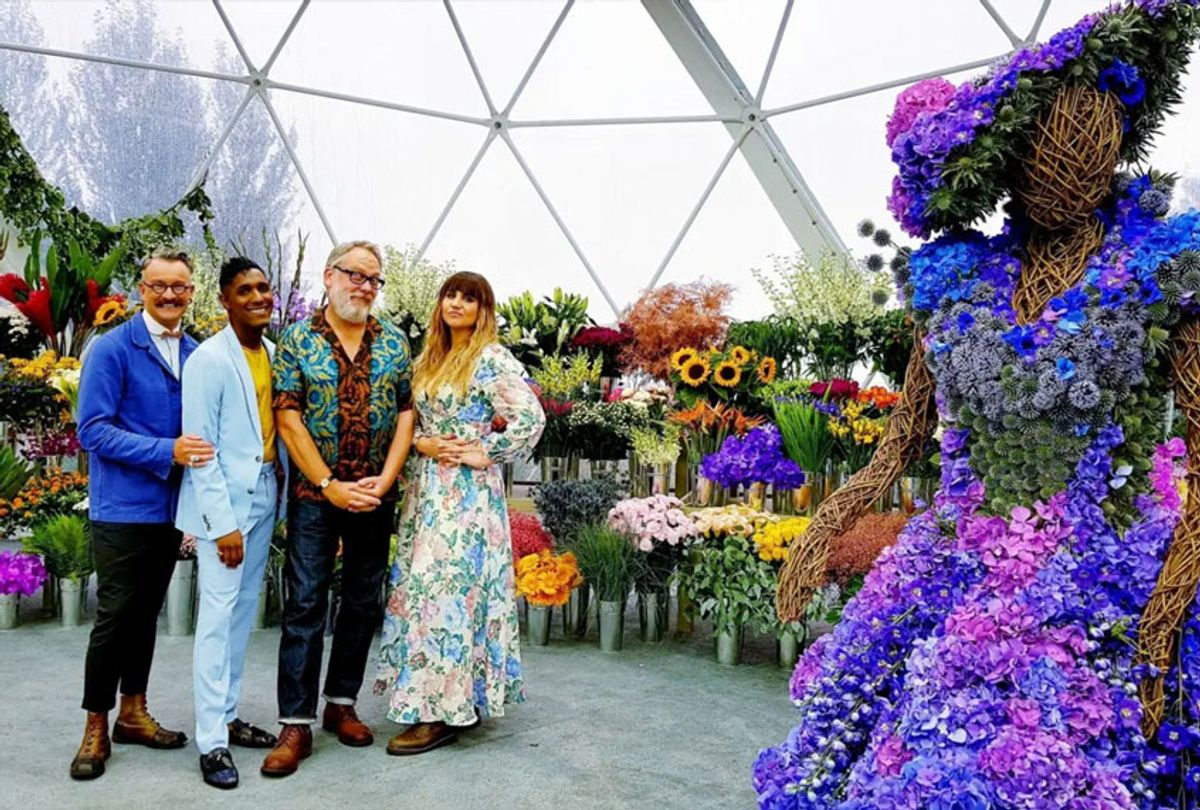 Everybody eats. Everybody – well, almost -- wears clothing. These partly explain the perennial appeal of craft competition TV classics such "Project Runway," its descendants such as "Top Chef" and every other series that lifts from its format. Each has a way of walking us through its designers' and chefs' elaborate interpretations of life's essentials, be they in the reams of style or sustenance, and making the means of creation feel essential.

Their structures are nearly identical, down to the outdoor setting; in place of the signature "GBBO" big tent is the "Flower Fight" dome, setting of inspired feats creating ingenuity using flora as the medium. Contestants hail from around the U.K. and the United States locales – Brooklyn, mainly – and range in experience from wedding florists to a hipster couple that's really good with house plants.

Each episode presents a challenge that's gigantic in scale – thrones built to accommodate giants, sculptures of gargantuan insects or animals – rendered entirely in flowers and vegetation, save for the structures holding them up, and completed in a matter of hours. The score is kicky with bright orchestral strings that lilt and pluck, and at stake is a floral sculpture display at London's Royal Botanic Gardens, Kew.

Many of the outcomes are stunning; those that aren't miss the mark so obviously that even the failures are impressive.

Why, then, doesn't "The Big Flower Fight" feel necessary? Any number of reasons could accurately apply here, but at the top of the list may be a mismatch in central materials.

Set side-by-side with "GBBO,"  "Flower Fight" reveals what's lacking right out of the gate in the form of its hosts, British comedian trying very, very hard Vic Reeves and "What We Do In the Shadows" star Natasia Demetriou, who isn't expending much energy in this role. The argument could be made that the pair doesn't want to outshine main judge Kristen Griffith-VanderYacht, but that would be impossible.

Griffith-VanderYacht excitement over the pieces he's evaluating compensates for many of the show's sins-by-omission, and he way he takes the wind out of a contestant's sails by following enthusiastic praise with a "But!" is the type of expression worth emulating.

But! His energy isn't enough to carry the whole arrangement. Even Mary Berry and Paul Hollywood need lively co-hosts to play the leavening to their flour and binder, as it were. Reeves and Demetriou, try though they may . . . and they don't, really . . . don't support their resident florist to the stars and the parade of guest judges that drop in each episode nearly as well.

A portion of the problem is a lack of exciting personalities in the contestant pool too – not their fault but a lapse of judgment in the casting department. I'll grant you, a few forces to the reckoned with stand out right away, largely recognizable by wardrobes straight out of Wonderland, gigantic attitudes, or in the case of a pair of Irish artisans, the ability to throw shade with the force of a silent sneer.

The amateur bakers in "GBBO" aren't huge personalities either, but they don't need to be since the appeal is what they represent – the unsung skill and creativity of the humble home baker, a craft millions of us ply with little celebration and rarely with as much creative genius as what we see in the tent.

Flower arranging also is a homegrown skill, just not as widely practiced and only appreciated on one or two holidays, maybe a birthday or an anniversary. Most people don't really contemplate the value of a balanced floral arrangement; they leave it up to the unseen hands at the grocery store throwing together greens and buds in a way that's pleasing to the eye and tells the wife "I'm sorry" without actually apologizing.

But the fact that flowers aren't everyone's cuppa either should not doom "The Big Flower Fight." It doesn't stop people from being fascinated by shows like "Forged in Fire" or "Blown Away," two example of craft competitions challenging contestants to display their talent under a time crunch and often using materials that aren't familiar to them.

The viewer doesn't have to be obsessed with glass blowing or weapon forging to appreciate the care and skill that goes into creating each episode's project. Culinary aptitude or skill with sewing machine aren't required prerequisites to enjoying their cousins on Bravo or Food Network either. All we need is a means of appreciating the artistic process and contestant originality.

Ultimately this is where "Flower Fight" wilts and short shifts its participants, who are creative and unique and in a few cases quite charming; a father-son duo is especially heartwarming, as is a couple of visual artists who are so stylistically synced that the fact that they've never worked with floral sculpting doesn't matter.

Some episodes explain the why of the materials without adequately exploring how they're employed. Others are focus on the mechanics of the challenge without following the struggles in which the teams embroil themselves in a way that sparks drama or juices tension. This makes the workroom scenery completely skippable whereas in those other series that's where the fire lives.

All that said, "The Big Flower Fight" could serve a similar purpose to a decent floral arrangement, which is to say it adds to the ambiance of a room without drawing attention away from anything else around it. Faint praise, admittedly, and especially in a genre whose strongest examples immerse us in sensory experiences, inspiring some viewers as an effect.

This series contains lovely proposals at the start of each episode and a few eye-popping pageants in the form of the judging segments, and using the fast-forward button on one's remote makes it very easy to skip from one eye-teasing pretty to the next without losing much storytelling along the way. Much of what comes between those segments is chaff, making the charms of "The Big Flower Fight" that aren't wasted at best temporary pleasures that fade away all too quickly. And you might wonder if it was worth the (time) expense at the end of it all.

All episodes of "The Big Flower Fight" are current streaming on Netflix.