In "The Painter and the Thief," an artist paints a portrait of the man who stole her masterpiece 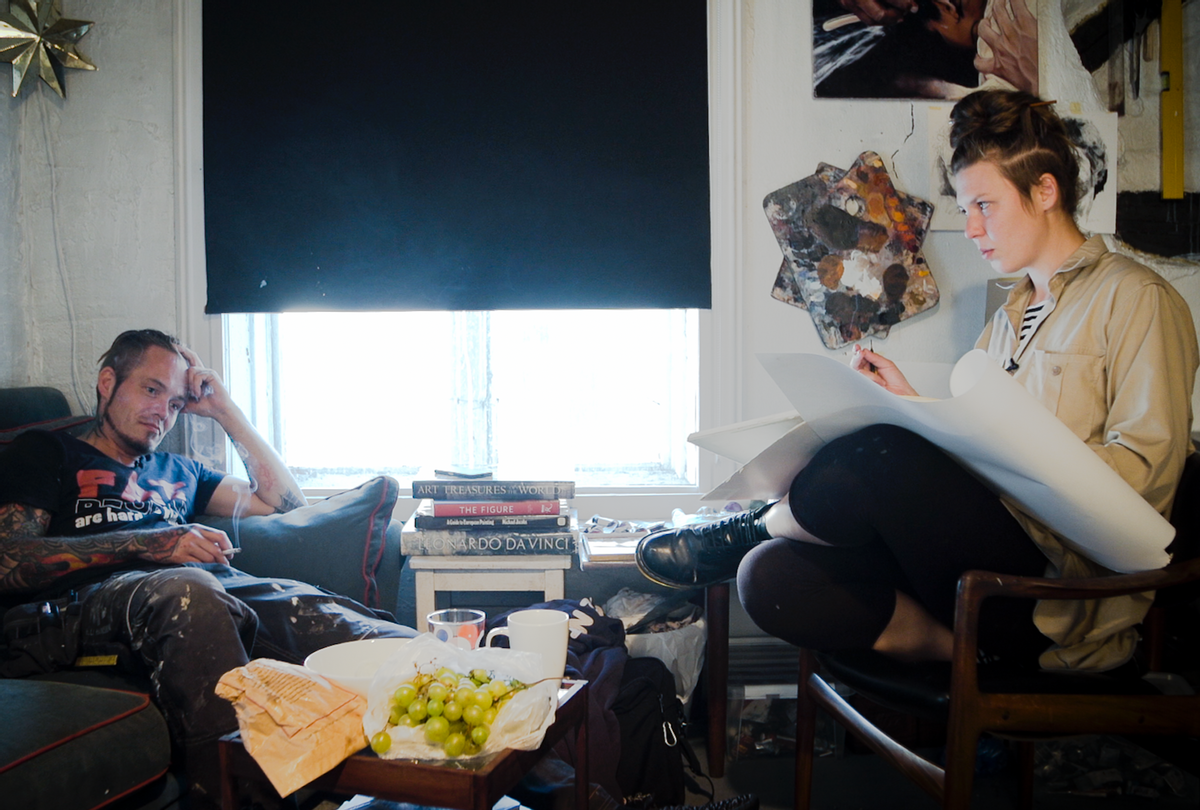 Benjamin Ree's remarkable documentary, "The Painter and the Thief," won the World Cinema Documentary Special Jury Award for Creative Storytelling at the Sundance Film Festival earlier this year. Produced by Morgan Neville, this film, which is available on Hulu and VOD May 22, chronicles the intriguing friendship that develops between Barbora Kysilkova, a Czech-born painter, and Karl-Bertil Nordland, one of two men who stole her work out of an art gallery in Oslo, where they both live.

Ree opens his film with Kysilkova creating "The Swan Song," which was one of the two paintings (worth 20,000 Euros) that Nordland and his coconspirator stole. Viewers also see the gallery heist via camera footage that helped the police catch the art thieves. And when Kysilkova attends the trial, she eyes Nordland with fascination. While acknowledging that it may perhaps be inappropriate to talk with him, she approaches him because she wants to paint him. And soon begins a complex pas de deux. Norland is a junkie who was so wasted he cannot recall what happened to Kysilkova's work. Meanwhile, Kysilkova finds inspiration in the thief who stole her paintings.

This is only the beginning of "The Painter and the Thief," which reveals much more as these two unlikely friends get more intimately involved in each other's lives. Both are seen grappling with different kinds of trauma. Ree filmed Kysilkova and Nordland over three years, which allowed him to fill in their backstories as their lives took some interesting twists of fate.

The filmmaker spoke via WhatsApp with Salon about "The Painter and the Thief."

How did you find your subjects and determine there was a story here?

It all began with me researching art robberies. I had just finished "Magnus" a doc on the chess prodigy Magnus Carlsen, and I was tired of working on an introverted sport and personality. I wanted to film people whose emotions were on the outside. This story came up in the newspapers in Norway. I followed the case, and I contacted Barbora. I heard that she contacted the thief and that was a great setup. I got access to film them both the fourth time they met. Initially, it was commissioned to be a short 10-minute documentary, but I realized quickly that these two people were amazing in front of the camera. They are not self-aware; they are natural and authentic, and their emotions are on the outside. Filming year after year, I realized that their story was bigger than a short documentary. There are so many surprises and turning points. We shot over three years until a circle was closed.

You alternate between the two characters. Was that your original plan? How did the dramatic changes in their lives impact your storytelling?

We found the approach in the editing. While filming, it was being there in the decisive moments in their lives. That's what documentary filmmaking is about — the situation is more important than me being there with the camera. It's great to be [shooting] when dramatic things happen, but it is in the editing room where we show the complexity of the subjects. I wanted to show how intelligent Karl-Bertil is and to see things from his point of view. The cliché is to follow the artist, but it would surprise the audience to see the thief's point of view. I was inspired by Gestalt therapy and the empty chair technique, where you look at yourself from another point of view. I did this and it was a shock to see myself from another point of view, so I wanted to apply that effect on the audience.

Do you think it was inappropriate for Barbora to approach Karl-Bertil in the courtroom?

I think that she really took a chance there, but for Barbora, her art is everything. She lost her two most valuable paintings. She saw an opportunity. She wanted to make a portrait of the thief stealing the painting, but when she met him, she didn't see a thief, she saw another human being. It was a brave move, but also a strategic movie. She saw an opportunity to make something out of this situation.

Do you think their relationship was exploitative? Barbora and Karl-Bertil both took emotional risks. They both had an attraction to destruction. But they find confidence with each other. What motivates them?

That was one of the questions that I had when I began film: Why do they have this connection, and what do they need and take from each other? Barbora says, "Who's the real thief here?" She also takes something from him. This is what the film is exploring. I don't want to answer this, and I don't want to reduce it to a simple answer. Maybe I don't know. This was what drove me to make the film — to explore it to the best of my ability.

What about the paradox raised by her boyfriend, Øystein Stene, who chides Barbora for painting Karl-Bertil's wound? He finds it invasive. She sees the aesthetic.

This is where I saw myself in Barbora, and why I chose to have it in the film. To make art, you always need inspiration, and in this case, Barbora sees Karl-Bertil's [wounded] hand. He almost died when he got that wound. This is what she sees, and she immediately thinks about her art project first. I also think it is fascinating to see a female artist, which is rare. Her art is her life's work. Filming is a huge dilemma because the best scenes feature the biggest drama, and drama is people suffering. Karl-Bertil and Barbora have become my friends, and being there watching them suffering, I think, "Should I turn the camera off and hug them, or continue filming?"  I mirrored Barbora in that way.

Did you ever want to — not that its ethical — stop Barbora or Karl-Bertil from being self-destructive and help them? There is an interesting scene of him selling drugs on the way to rehab.

Most of the time I kept on filming. Of course, I wanted to step in, but my job is to observe them with empathy. How I observe them together puts me in the film. I wanted to show their beauty and complexity. Having access to a scene like Karl-Bertil selling drugs — he wanted me to film that — to show that when the party's over, this is what is left. He wanted me to show the ugly truth. He said, "You have to film me buying drugs on the way to rehab." The next day he said that I can't use it; it's too personal. The next day, he said,"You have to use that film, it's so important!" That's how we talked about the scenes. They are personal, but a struggle. We had a common understanding built on trust. I filmed a lot and tried not to interfere too much. It's painful for Karl-Bertil to watch parts of the film, but he thinks it can help others by showing the ugly truth.

"The Painter and the Thief" shows two people who each suffer trauma and vulnerability but manage to find strength in one another. What observations or insights do you have about the nature of their relationship?

I was fascinated by their contrasts when I started making this film. Robbers are seen as low culture, and art is high culture. But after three years, I realized these two people are really alike. What do they see in each other and how do they mirror each other? They each have pasts that haunt them, and they deal with them in different ways. What they get from each other is that they have the same kind of sense of humor. Karl-Bertil's dark humor is great. He quotes Shakira after he has a serious accident! They are dark lonely souls that found company in each other. Barbora has always been fascinated by his sadness. It's beautiful to her, not negative. His self-destructiveness is something else she found fascinating.

Do you think you exploited their relationship? They both crave attention. Things could have played out differently, even dangerously.

I think structure, dramaturgy, and how you use the camera is an ethical choice. Hopefully, viewers will see a very personal film and with respect and empathy for Barbora and Karl-Bertil. This is why we chose the structure for the film showing two points of view and their complexity. It's not just artistic choices, but ethical choices. We want you to like both of them even though they make bad choices. The film could have gone in a totally different direction, and it would have been another film. But most likely, it would not be a film. If Karl-Bertil died, I wouldn't have made the film. He almost died many times during the making the film. He's lucky to be alive.

"The Painter and the Thief" is available on Hulu, VOD, in virtual cinemas, and select drive-in theaters on Friday, May 22.

Documentary Hulu Movies The Painter And The Thief