"What have we got to lose to listen to what you said that Donald did right?" Cuban asked the Trump apologist 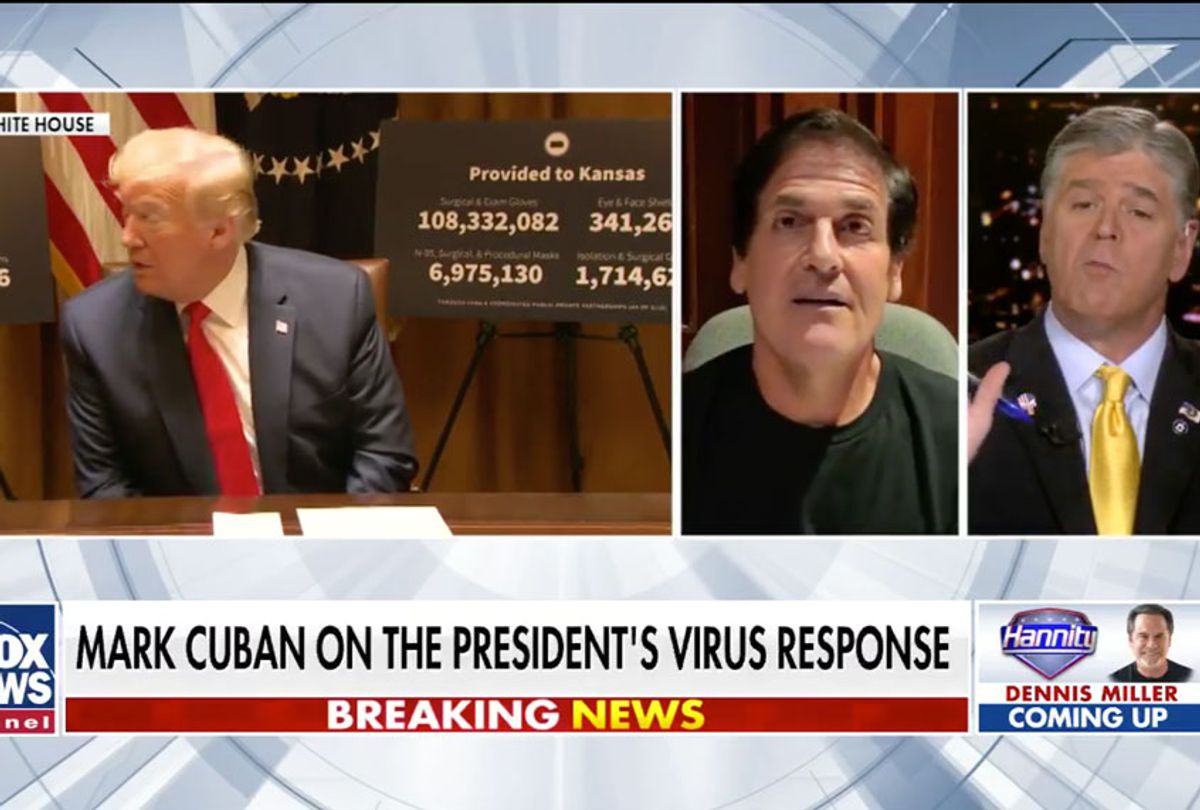 "This is what really bothers me about the president: He's the most powerful man in the world, and he always plays the victim card," Cuban said. "'The Dems are out to get me! The media is out to get me!'"

"They spied on the guy!" Hannity retorted in reference to Trump's new favorite baseless conspiracy theory, which the president himself cannot explain but has nonetheless dubbed "Obamagate."

"Who cares?" Cuban responded. "He's the most powerful man in the world. Be powerful — be a leader."

"He's supposed to be the world's best counterpunch. He hasn't been able to knock anybody out," the billionaire continued. "He just plays the victim."

Cuban, whose turbulent relationship with the Trump dates back to their competing reality shows of "The Apprentice" and "Shark Tank," reportedly mulled a third-party presidential bid before deciding to throw his support behind former Vice President Joe Biden, now the presumptive Democratic nominee.

Hannity had invited Cuban on his program to discuss the future of sports amid the coronavirus pandemic, but the topic quickly shifted to electoral politics.

"You tell me all the things 'Bunker Joe' did on coronavirus that you admire, and then I will tell you what I think Trump did that I admire," Hannity challenged.

"Well, Joe is not in charge of anything right now, right? He's a candidate, so we can't really put him in that category," Cuban replied, before flipping the question back. "But I will listen. What do you think — I mean, what have we got to lose to listen to what you said that Donald did right?"

Hannity, who for a moment appeared unprepared to answer his own question, did not turn to pet issues like hydroxychloroquine or ventilators. He instead fell back on Trump's partial travel restrictions on China, a policy which Cuban agreed was a good move.

But when Hannity shifted the topic to the federal response in New York, the hardest-hit state in the nation, Cuban countered that the administration had been caught flat-footed early on when hospitals suffered personal protective equipment shortages. He said the White House missed out on its opportunity to fix the problem, "because no one was truly in charge."

Hannity turned back to the presumptive Democratic nominee, asking Cuban if he was afraid of a potential President Biden, who Hannity suggested was in cognitive decline.

Cuban, who in 2016 expressed his concerns about Trump's leadership by calling him a "jagoff" who got "stupider before your eyes," acknowledged that Biden "scares me in some areas." However, Trump, who Cuban once admitted "scares the sh*t out of me," scares him more.

"Because I think that Donald doesn't put the best people in place any longer. He did at the beginning — and I was proud of him at the beginning — but now, he just wants people who are loyal to him," the Shark Tank star said. "That's a problem, and it's created more problems in this pandemic."

A study from the University of Chicago's Becker Friedman Institute for Economics last month found that Hannity's audience was more likely to die of COVID-19 than viewers who watched rival Fox News program "Tucker Carlson Tonight."

"The selective cherry-picked clips of Sean Hannity's coverage used in this study are not only reckless and irresponsible, but down right factually wrong," a spokesperson for Fox News said in a statement. "As this timeline proves, Hannity has covered COVID-19 since the early days of the story. The 'study' almost completely ignores his coverage and repeated, specific warnings and concerns from January 27-February 26 including an early interview with Dr. Fauci in January. This is a reckless disregard for the truth."

Fox News has mandated that all of its hosts broadcast remotely through at least mid-June.