What does Trump mean by "war president"? He's really the leader of a death cult

Trump is endangering and humiliating his own followers. Will they learn the lessons of history? Obviously not. 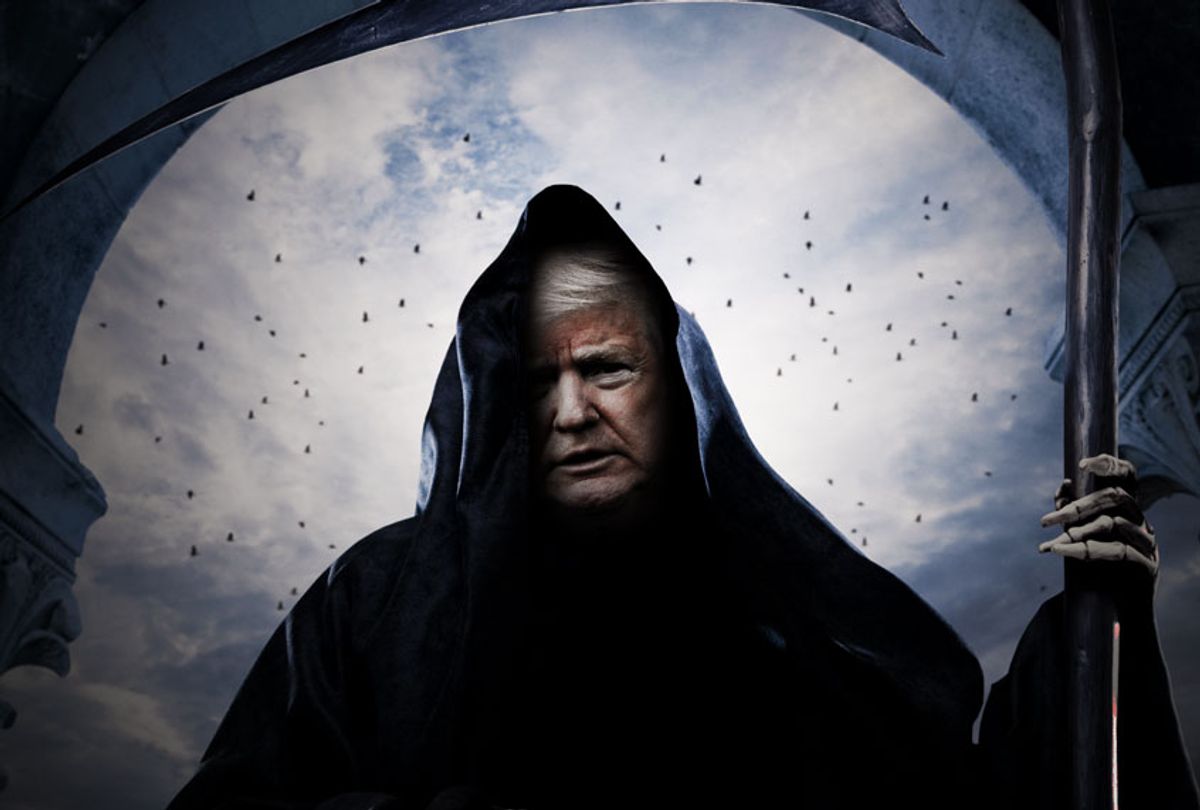 In explaining his response to the coronavirus pandemic, Donald Trump has at times claimed to be a "war president." This is a gift to journalists, reporters and the commentariat — but a toxic one.

In the malignant reality that is the Age of Trump, "war president" is a concept such people believe they understand. It summons images of a solemn and inspiring president and a patriotic public and political class. This is an easy story to write and follow, even if neither journalists nor the public believe Trump's claim to be true.

But because so many members of the American news media are still unwilling to accepting the fact that Trump is an authoritarian and a would-be fascist dictator, they are stuck in familiar old habits — which have become obsolete in a time of failing democracy.

Such denial of America's new reality means that too many reporters, journalists and other political observers function as the president's dupes, desperate to normalize his abnormalities and dangers.

These old habits not unlearned and replaced by new and better ways of thinking have transformed too much of the mainstream news media into vectors for Trump to inject his poison into the body politic.

"Obamagate" is covered as though it were something real instead of another mess of Trumpian right-wing lies. Trump's incoherent gibberish is rephrased or parsed to sound halfway intelligible and "presidential." It took years for reporters to state plainly that Trump is a compulsive liar. Many reporters have assumed, and still do, that Trump has the best intentions for the United States and its people, as opposed to the worst. Too many remain in denial about the fact that Trump cares only for himself, and not at all for the common good. It is still forbidden to speak publicly in major news media about Trump's evident mental unfitness. Rampant "both-sides-ism" still abounds, in which Trump's abominations are presented as just "differences of opinion" and his administration is rarely or never described as being fascist, authoritarian or white supremacist.

Donald Trump is operating from a very different playbook than previous presidents. When he summons the "war president" archetype, he means something very different than is commonly understood by most people in the news media or among the public.

With the power of those words, Donald Trump is declaring, once again, that he has no respect for the rule of law, the Constitution or democracy. Trump's "war president" operates in a "state of exception" where his authoritarian powers expand and his war on democracy wins another victory. Philosopher Jason Stanley explained this in a recent conversation here at Salon:

When an authoritarian or like-minded leaders and regimes want to suspend democracy, they use the language of "war." Trump calling himself a "war president" enables him to do drastic things such as rushing bills through Congress without proper debate, hearings and public scrutiny. An emergency is a very dangerous time, and the fact that the coronavirus pandemic is a real emergency makes matters much more perilous and complicated.

If Trump imagines himself to be a great leader and "war president" in his struggle against the "invisible enemy" of the coronavirus then he needs foot soldiers ("warriors") who are willing to go in harm's way — to be implements of his will, to serve loyally and without dissent as they do battle on his behalf.

In his role as "war president" in the time of pandemic, Trump leads a death cult.

The members of that cult are told by Trump and his agents to gather together at rallies and other staged events where they proclaim the pandemic to be a "hoax" or a "fraud" and protest that they are being "oppressed" by public health laws designed to save lives. Some will become infected, fall ill and die, while quite likely spreading the lethal pathogen to innocent people.

Trump's mouthpieces command his followers to go shopping, eat out at restaurants and spend money because to do so is "patriotic" and shows love for "the country." Trump's followers now view wearing protective masks as "weak" and effeminate, a surrender to "political correctness." If these Trump "warriors" happen to die, it is a glorious act of sacrifice.

In Trump and his right-wing movement's cruel and evil view of the world, deaths from the coronavirus are a good thing: Weak, sick, elderly and other vulnerable people should be gracious enough to die; they have outlived their usefulness.

In its own perverse way Donald Trump's Republican Party death cult is "inclusive": There are the heroes and also the "useless eaters." Both groups, with different justifications, are to be sacrificed or culled in the plutocrats' social-Darwinist project.

The logic of glorious death and sacrifice for Donald Trump's fascist regime is nothing new. The death cult and glory are core myths of fascism.

In such a perspective everybody is educated to become a hero. In every mythology the hero is an exceptional being, but in Ur-Fascist ideology, heroism is the norm. This cult of heroism is strictly linked with the cult of death. It is not by chance that a motto of the [Spanish fascist] Falangists was Viva la Muerte (in English it should be translated as "Long Live Death!"). In non-fascist societies, the lay public is told that death is unpleasant but must be faced with dignity; believers are told that it is the painful way to reach a supernatural happiness. By contrast, the Ur-Fascist hero craves heroic death, advertised as the best reward for a heroic life. The Ur-Fascist hero is impatient to die. In his impatience, he more frequently sends other people to death.

During a recent trip to a medical equipment supply center in Allentown, Pennsylvania, Donald Trump channeled this ideology in a literal sense, praising the deaths of health care workers from the coronavirus as "a beautiful thing to see":

They are warriors, aren't they? When you see them going into those hospitals and they're putting the stuff that you deliver, but they're wrapping themselves and the doors are opening and they're going through the doors and they're not even ready to go through those doors. They probably shouldn't….

They're running into death just like soldiers run into bullets, in a true sense. I see that with the doctors and the nurses and so many other people. They go into those hospitals, it's incredible to see. It's a beautiful thing to see. But I really call them "warriors." We're all warriors; everyone in our country is a warrior.

In the final analysis, Trump's views his supporters as human kindling who will fuel his vainglorious assault on American democracy and civil society.

But there is little glory or greatness in Donald Trump's death cult. Is it marvelous to die for the "freedom" to eat in bad chain restaurants, shop at big-box retail stores or get mediocre haircuts at the mall or on Main Street? Suffocating, drowning as phlegm fills your lungs because you refused to stay home, practice social distancing and wear a mask is more the stuff of a grim Monty Python sketch than Leni Riefenstahl's "Triumph of the Will."

Moreover, the "sacrifice" of Trump's death cult members and other supporters is both pitiful and comical because Trump cares nothing for his "white working class" followers.

Adolf Hitler's chief propagandist Joseph Goebbels said, "The whole German people will perish with us, so gloriously that even after a thousand years the heroic downfall of the Germans will occupy pride of place in world history."

There was of course no pride for the defeated German nation, only ignominy and destruction. Trump's followers and his other supplicants would be wise to learn that lesson.

History should warn Donald Trump's "warriors" what awaits them when their Great Leader finally meets his downfall. Will they listen? The answer of course is no.