This five-ingredient gooey butter cake is an American classic

This version of the classic that uses only five ingredients, which means fewer dirty bowls and almost no waiting 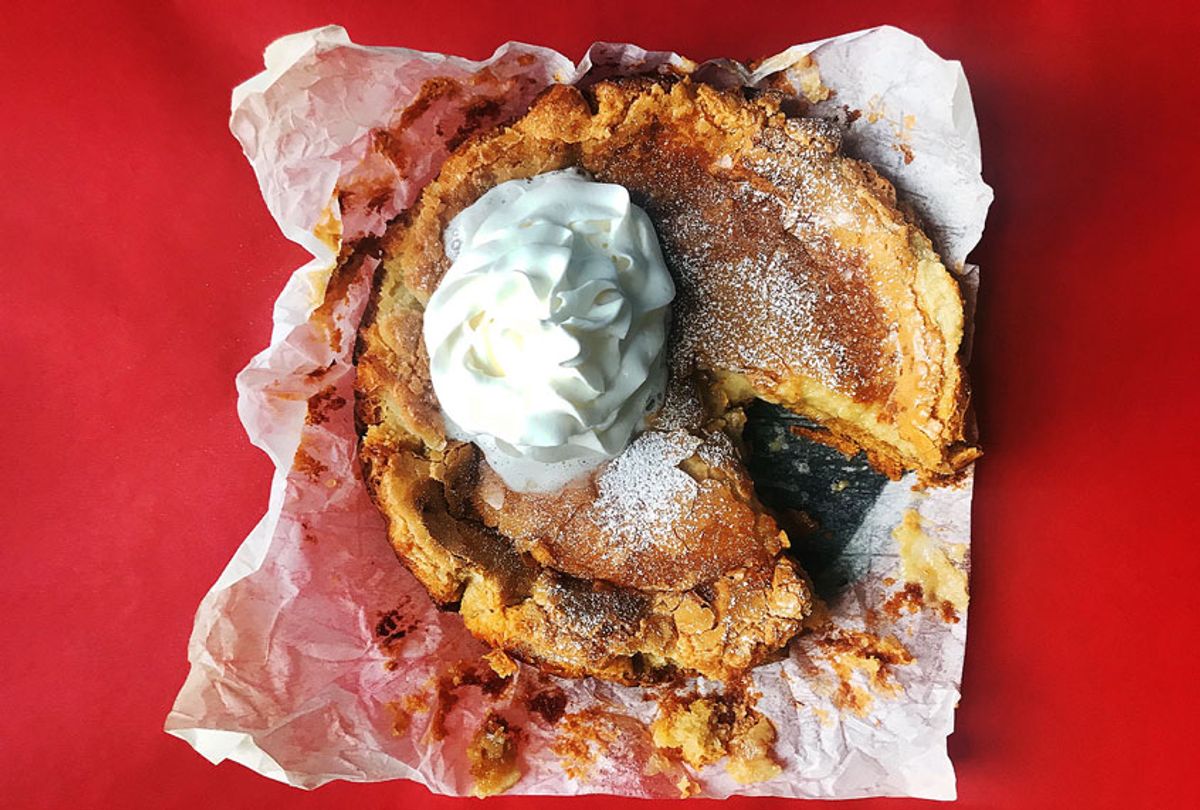 I used to know a man who never met a delicious dish — preferably a dessert — that he wouldn't do an elaborate "Oh no, I mustn't!" dance around. There I'd be, eager to dive into a milkshake the size of an Instant Pot, and he'd unfailingly declare, "Wow, they sure give you big portions here, huh? It's so rich, I'll never finish it." Then he'd look at me, digging my straw around a freshly drained glass, like I was animal. He would've gotten along well with my neighbor who once asked me —at a birthday party no less – if I'd care to split a cupcake with her. A cupcake.

I'm bringing this up, because I'm going to tell you about a cake. I want you to make yummy noises when you eat it. And I want you to share it with your loved ones without saying, "It's almost too sweet – that's why I'm cutting it into teeny tiny portions." Just trust that this is a cake that does, as the English say, exactly what it says on the tin. And that when you're serving something called Gooey Butter Cake, you can confidently assume everyone knows what they're about to get into.

It was the name that hooked me in, obviously. "Gooey," "butter" and "cake" all separately appear on my list of favorite words. Put them together, and well, hello, I'm listening.

Like the aptly named Depression Cake, the St. Louis Gooey Butter Cake arose in the 1930s. And like its contemporary, it was the result of the inventiveness that comes from hardship. But while Depression Cake was borne of a lack of ingredients — eggs, butter, dairy — Gooey Cake was the product of excess.

The exact origins are a little fuzzy, but the general story goes that a German baker in South St. Louis flubbed a recipe for a yellow cake, or perhaps a coffee cake. The baker either reversed the ratios of ingredients or simply overdid it with some crucial elements. Rather than waste the extravagant culinary misfire, the baker sold the resulting cake. And just like the creation of the Powerpuff Girls, the alchemy of sugar, spice and everything nice turned into something fantastic.

There's a crust, which tastes kind of like the top of a crumb cake, dense and sugary. There's a filling, which is creamy, buttery and wiggly. If you've ever been to The Wizarding World of Harry Potter, you might find the taste reminiscent of butterbeer. If you're a fan of the famed Milk Bar Pie, which describes itself as "gooey buttery goodness," or a chess pie — another dessert created of thrifty necessity — you'll recognize the butterscotch-like flavor profile here. But you can't go to a theme park right now, and Milk Bar Pie and chess pie are labor intensive. And while there are more elaborate versions of the Gooey Butter Cake out there, wouldn't you rather make it with just five ingredients, fewer dirty bowls and almost no waiting?

The formula is similar in any recipe you come across, though some bakers call for less butter or an additional egg. I lean here in a "they don't call it butter cake for nothing" direction. I also brown the butter, because I will never not brown butter if I see an opportunity to do so. If you feel the same, please brown each stick separately so both the crust and filling get their fair share of beautiful sediment. You're going to need an entire box of confectioners sugar – I hope you're cool with that. And while the cake is traditionally made bar style in a rectangular pan, I prefer to make it in a springform one to better ensure that every single slice has the perfect edge-to-goo proportions. (I also recommend doing brownies this way. It will change your life.) If you don't have a springform pan, just use a 9" round cake one. Or stick with the tried and true 9" x 13" rectangular pan. It's your cake.

All I ask is that you enjoy it wholeheartedly and unconditionally. You don't have to warn, as The New York Times once did, that it's "gastronomic lunacy." It isn't. Gooey butter cake is a lovely, homey, American dessert. It's a happy accident. It's a product of a time of sacrifice, uncertainty and hardship. And this holiday weekend, it's a cake to be proud of.

2. Melt two sticks of butter in separate pans. If you're browning your butter, keep it on medium heat as it pops and bubbles, until it turns a rich amber color. Remove from heat.

3. In a large bowl, beat cake mix, one egg and one of your melted or browned sticks of butter (including the brown bits at the bottom of the pan) until smooth and well combined. Pat into your pan, letting some of the crust come up along the sides.

4. Beat cream cheese until fluffy. (I use the same bowl in which I mixed the crust.)

5. Add two eggs and your second stick of melted or browned butter. Beat well, then add all the confectioners sugar and your vanilla, if using.

6. Pour into your pan on top of the crust.

7. Bake for roughly 45 minutes, give or take a few on either side. You want the top to look nicely browned but the center to have a good amount of jiggle to it.

Let cool as much as you can endure, but enjoy the first serving while it's still a little warm for maximum gooeyness. Dust with the dregs of your box of sugar, if you have any.