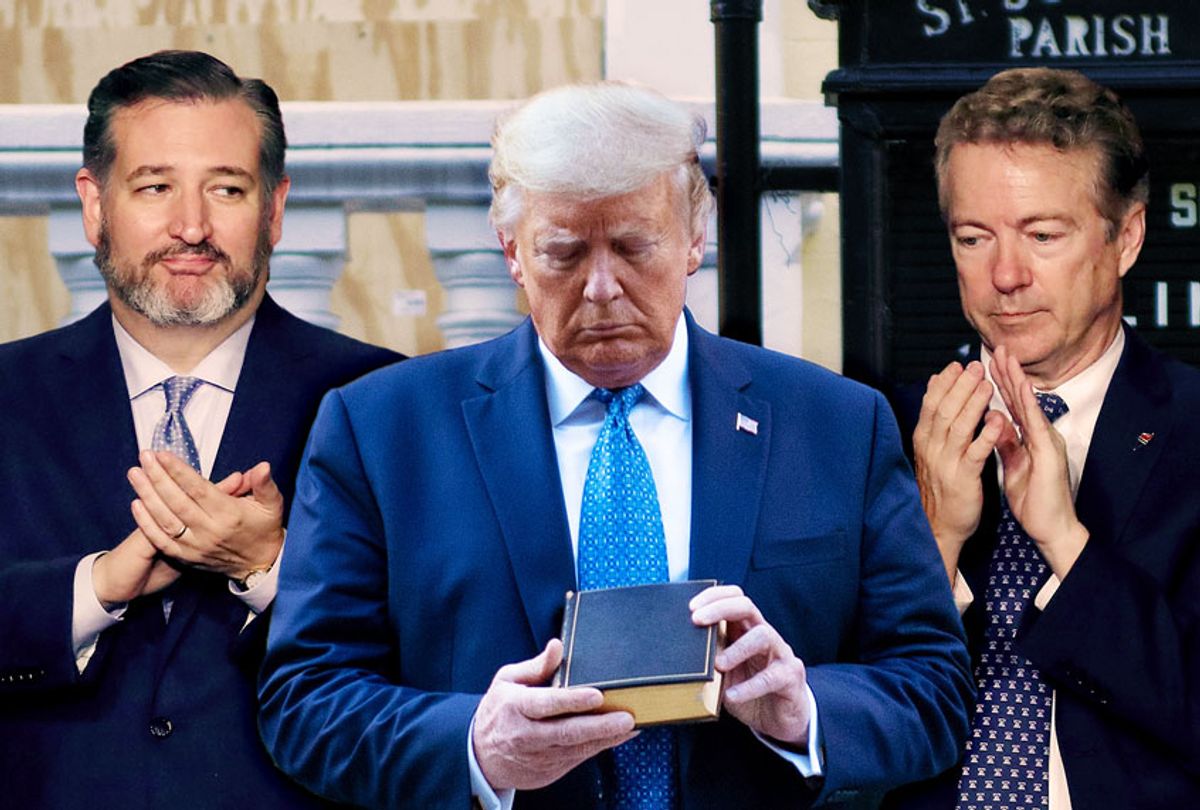 Senate Republicans who once pushed a conspiracy theory that former President Barack Obama would impose martial law had no problem with President Donald Trump threatening to send the military into American streets against the wishes of governors or police backed by the National Guard unleashing tear gas and rubber bullets on peaceful protesters to clear the way for his photo-op in front of a church.

Sen. Ted Cruz, R-Texas, and Sen. Rand Paul, R-Ky., were among the Republicans who stoked conspiracy theories about "Jade Helm," a military exercise which some conservatives alleged was a plot to secretly take over the red state of Texas and impose martial law.

"[Jade Helm] is a question I'm getting a lot," Cruz warned in 2015. "And I think a lot of the reason is we have seen for six years a federal government disrespecting the liberties of citizens and that produces fear when you see a federal government that is attacking our free speech rights, our religious liberty rights, our Second Amendment rights — that produces distrust to government."

Cruz said he demanded answers from the Pentagon about the operation.

Paul similarly vowed to look into the conspiracy theory after a radio host said people were "nervous" about the plot. He also led a 13-hour filibuster after then-Attorney General Eric Holder did not rule out using a military drone against Americans on U.S. soil.

The operation took place in 2015, and of course, ended without any martial law or takeover attempts.

But when asked about Trump's threat to deploy the U.S. military to cities before authorities tear-gassed peaceful protesters so he could pose with a Bible in front of a nearby church, Cruz and Paul had none of the same reservations about federal power.

"I guess I was mostly horrified by the violence I've seen in our cities," Paul told HuffPost when asked about his reaction.

Cruz went a step further, declaring that Trump was "exactly right" to clear the area to go to the church on Monday as he accused protesters of "terrorism."

Asked whether it was an "abuse of power," Cruz told MSNBC's Kasie Hunt, "by the protesters, yes."

Other Republicans also expressed support for Trump's show of force.

"Obviously, it was a necessary security measure," Sen. John Cornyn, R-Texas, the No. 2 Republican in the Senate, told CNN.

Sen. Chuck Grassley, R-Iowa, the longest-serving Republican in the Senate, also approved of the move.

"We expect leadership from our president and particularly in times like this," he said. "And I think that when there was destruction to a church or any other historical thing that America would put great confidence in that should not be destroyed, I think a president ought to bring attention to that terrorist activity, and go there and do . . . what he did last night."

"I'm not going to critique other people's performances," the Republican said.

"Well, I don't know what the point was," he told CNN. "I guess he's trying to say we're reclaiming the church, but the point is that we need to focus on what happened to Mr. Floyd. It's a systematic problem, but you can't do that until you get order."

Democratic leaders, meanwhile, decried the move and said Trump's "continued fanning of the flames of discord, bigotry and violence is cowardly, weak and dangerous."

Washington Episcopalian Bishop Mariann Budde, who oversees the church where Trump posed, said she was "outraged" that Trump showed up "without permission" after delivering a speech that was "antithetical to everything we stand for."

Despite their reservations about Obama's use of federal power, Republicans have largely called for Trump to do more — not less — in response to the protests. Members of his own party have called for protesters to be peaceful even as they trashed peaceful protesters who called out police brutality.

But Cruz likewise lashed out at NFL players who kneeled during the national anthem to protest police violence when Trump launched a racist attack against players.

"We condemn violence against property or persons," Pence tweeted Friday. "We will always stand for the right of Americans to peacefully protest and let their voices be heard."

Pence abruptly walked out of a 2017 NFL game in Indianapolis after several players from the San Francisco 49ers kneeled during the anthem.

"I left today's Colts game because President Trump and I will not dignify any event that disrespects our soldiers, our Flag or our National Anthem," Pence said at the time. "While everyone is entitled to their own opinions, I don't think it's too much to ask NFL players to respect the Flag and our National Anthem."