"Let my building burn": Despite vandalism and curfews, many restaurants continue to support protests

One bar in Louisville has found a way to honor David McAtee, the BBQ cook who died after police shot into a crowd 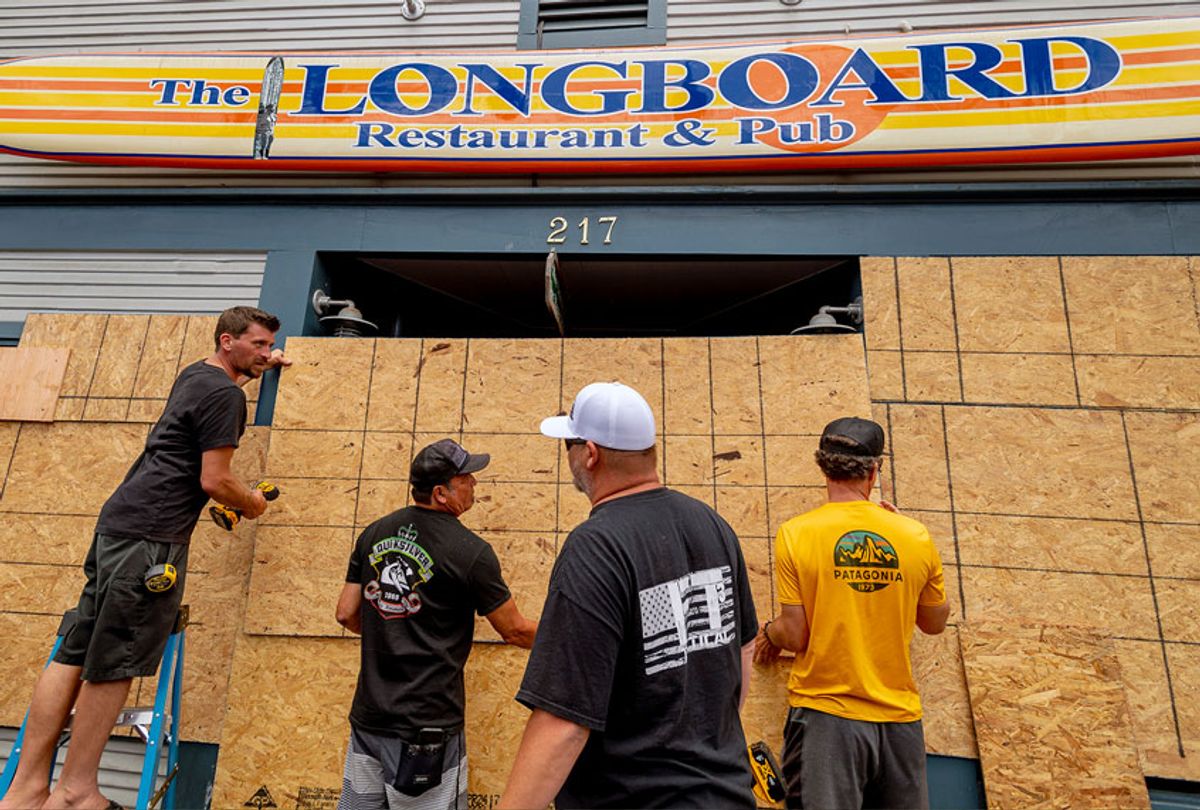 As a precaution in the event of a riot, the Longboard Restaurant & Pub is boarded up prior to a large protest (Getty Images)
--

The Limbo, a tiki bar in downtown Louisville, had reopened for less than seven days when the protests surrounding the police killings of Breonna Taylor, Ahmaud Arbery, David McAtee, and George Floyd began in Jefferson Square Park just a few blocks away.

Thousands of protesters crowded the streets, holding up signs with phrases like "0 Days Since An Innocent Black Person Was Murdered" and "What TF Happened To The Rubber Bullets" written in big block letters.

On the second night of protests, The Limbo's window was shattered amid the unrest, and the restaurant, like many businesses in the central business district, opted to board up the glass entrances to their bar. Soon after, Louisville Mayor Greg Fischer instated a 9 p m. curfew.

Limbo owner Olivia Ross doesn't believe the person who vandalized her bar was a legitimate protester, but more likely, she said, someone "taking advantage of the chaos."

Despite the damage, many restaurants caught in the upheaval accompanying the marches have become the de facto headquarters and spokespeople for the protesters. In the case of The Limbo, the bar has been serving as a safe space for demonstrators, with the dining room stocked with bottled water, first-aid kits, and vegetarian snacks for healing and refueling.

As for the reopening itself, that hasn't seen enough traffic to make a significant difference. After dining rooms were closed in March to prevent the spread of the novel coronavirus, Kentucky restaurants were allowed late last month to reopen their dining rooms at 33% capacity, while they can have unlimited outdoor seating as long as the parties remain six feet apart.

"Even with delivery as a new revenue stream, we're doing a fraction of what we were doing before COVID," Ross said. "Given the protests and the curfew, I think people are nervous about coming downtown. To be clear, I don' t think they should be nervous about the protesters — maybe the police, though."

Many business owners like Ross are opting to serve their communities and support the mission of the protesters, even while business realities are grim.

Understandably, this comes at a cost.

Kevin Westmoreland, who owns Chestnut and the Corner Kitchen in Asheville, NC, explained how the coronavirus pandemic has decimated his businesses.

"We went from a payroll of 115 staff members to four on March 16 due to the pandemic," Westmoreland said. "Revenue dropped to zero. Our fixed costs of roughly $75,000 a month continued, although many of our banking and other partners were helpful in giving us a couple of months of relief from payments."

But, Westmoreland said, payments start back up in late June, and business is still very slow. Chestnut is located in the heart of downtown Asheville where protests began late last week and an 8 p.m. curfew had been in place for days at the time of this report, cutting into precious time for evening takeout customers.

That said, he and many other restaurant owners in the downtown area support the demonstrations and the reasons behind them.

"It is heartening to see so many people speaking out in a way that is overwhelmingly peaceful, and there has been no damage on our street," he said. "We know some of the business owners that have had their businesses tagged and windows broken out. This has caused them to close until they can get repairs done and some are waiting until the protests are over to reopen."

This is in line with experiences like that of Ruhel Islam, whose Minneapolis restaurant Gandhi Mahal, which was set on fire and sustained damage during protests last week. In a Facebook post, Islam's daughter, Hufsa, said the mission of the protest was more important than the physical location of their restaurant.

"As I am sitting next to my dad watching the news, I hear him say on the phone, 'Let my building burn. Justice needs to be served. Put those officers in jail,'" Islam wrote. "Gandhi Mahal may have felt the flames last night, but our fiery drive to help protect and stand with our community will never die! Peace be with everyone."

Back in Louisville, Ross wanted her business' view on the protests to be made more explicit. On Wednesday morning, she commissioned a local artist to use the plywood boarding up her bar as a canvas.

On it, they created a massive portrait of David McAtee, the Black BBQ chef who was killed early Monday as Louisville Metro Police shot into a crowd after responding to a group who weren't abiding by the new curfew.

McAtee had dreams of purchasing the lot where he barbecued, replacing the stand he operated with a brick and mortar restaurant. Food has always been political — who has access to buying it, selling it, and telling its stories — and it seems only fitting that in its effort to support protesters, The Limbo honors his legacy.