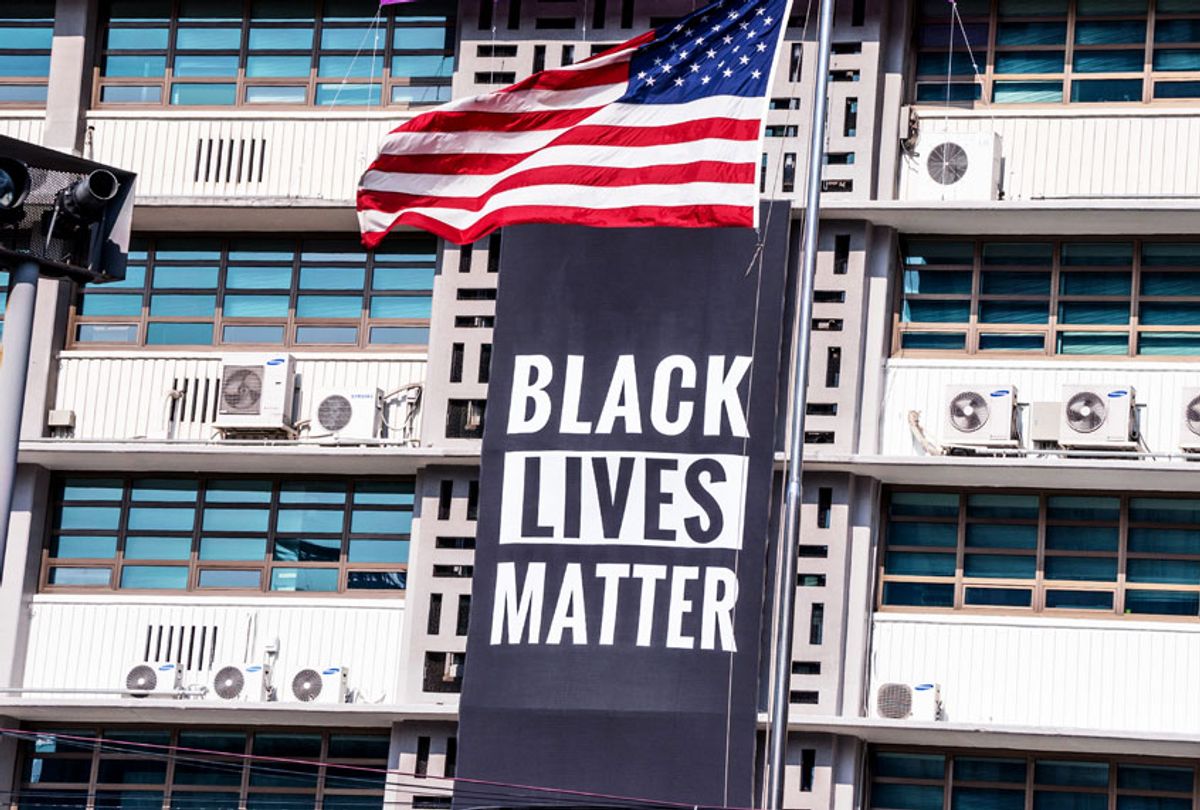 A Black Lives Matter banner, a United States national flag and a rainbow flag are hung on the facade of the US embassy building in Seoul. (Getty Images/imon Shin/SOPA Images/LightRocket)
--

State Department leadership forced the U.S. embassy in Seoul to take down a large Black Lives Matter banner two days after it was displayed, according to a new report. The same embassy has also removed a rainbow flag commemorating LGBTQ Pride Month.

The order came from the department's "7th floor," which houses Secretary of State Mike Pompeo's office, according to CNN. The department pointed out that the federal government does not promote donations to specific nonprofit organizations.

It is unclear why the Pride flag, hung in the days leading up to Pride Month in June, was also removed. In their place, the embassy hung a banner to mark the 70th anniversary of the Korean War, which read: "We will not forget."

The embassy's official Twitter account on Saturday posted a photo of the two-story-tall Black Lives Matter banner, which it called an expression of "solidarity with fellow Americans grieving and peacefully protesting to demand positive change" in "the fight against racial injustice and police brutality."

Harry Harris, the U.S. ambassador to South Korea who is a retired four-star admiral, said the banner had his approval. He added that "we gain our strength" from our diversity.

Harris unfurled the banner amid fierce nationwide backlash to the administration's controversial responses to nationwide protests over the death of George Floyd in the custody of Minneapolis police.

Bloomberg reported that the banner was removed after Pompeo and Trump expressed disapproval about media coverage showing the massive new standard hanging just behind the flagpole flying the American flag.

A spokesman for the embassy said in a press statement that "the ambassador decided to put the Black Lives Banner up to communicate a message of solidarity with Americans concerned with racism, especially racial violence against African-Americans."

The statement clarified that the intent "was not to support or encourage donations to any specific organization," and Harris directed the banner be removed in order to "avoid the misperception that American taxpayer dollars were spent to benefit such organizations."

"This in no way lessens the principles and ideals expressed by raising the banner, and the embassy will look for other ways to convey fundamental American values in these times of difficulty at home," the statement added.

The statement also quoted Pompeo: "America is rightly outraged at the brutal killing of George Floyd and our country will prosecute his killers and respect the right to protest peacefully."

The Pride flag has sparked diplomatic controversy about Pride month in the past. The State Department barred embassies from flying the Pride flag on their flagpoles last June. At the time, the department said it had no problem with embassies displaying it elsewhere. Spokeswoman Morgan Ortagus said:

"Pride Month that we're in right now is celebrated around the world by many State Department employees, by many embassies. The secretary has the position that, as it relates to the flagpole, that only the American flag should be flown there. But he, of course, as he said in his congressional testimony, respects the dignity of every individual and I think all of you can do a simple easy google or twitter search and see the pictures of members, embassies, ambassadors, people of the foreign service celebrating pride throughout the world."

The Pride banner that the U.S. embassy in Seoul removed was not on the flagpole.

Pompeo has long been criticized for his rigid fundamentalist views of LGBTQ issues. For instance, while serving in Congress as a Republican representative from Kansas, he co-sponsored two bills defining marriage as a union between a man and a woman.

After the Supreme Court legalized same-sex marriage in 2015 with its landmark Obergefell v. Hodges ruling, Pompeo issued a statement calling the decision a "shocking abuse of power." He promised to "continue to fight to protect our most sacred institutions." As secretary of state, Pompeo has banned same-sex partners from acquiring diplomatic visa in October 2018.

The State Department and the embassy did not immediately respond to Salon's request for comment.