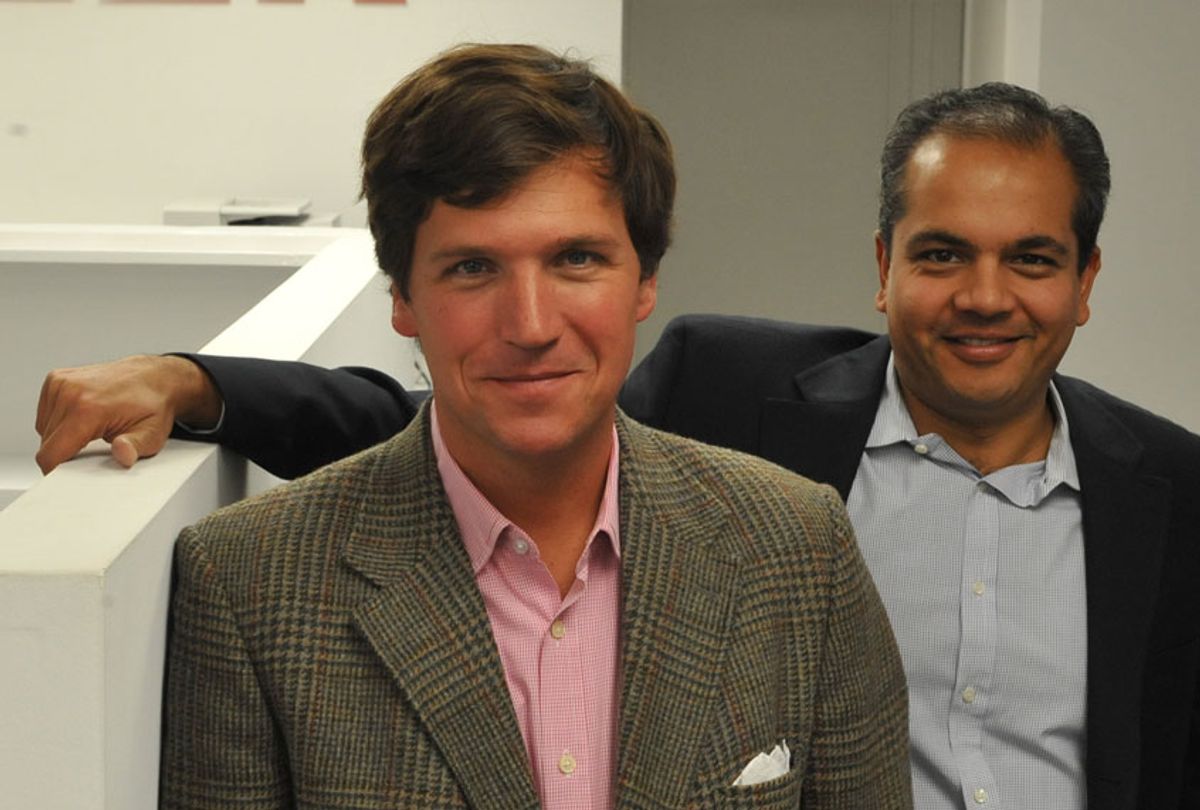 Tucker Carlson, L, and Neil Patel at the office of the new website, the Daily Caller, on January 6, 2010, in Washington, DC. The site, at which Carlson is the editor-in-cheif and Patel is the publisher, has been branded as a "conservative Huffington Post." (Jahi Chikwendiu/The Washington Post via Getty Images)
--

The Daily Caller, a conservative news outlet co-founded by Tucker Carlson, and its related nonprofit, the Daily Caller News Foundation (DCNF), appear to have operated in violation of tax law, according to a complaint filed Tuesday with the IRS by a public transparency watchdog.

The complaint — which the group, Campaign for Accountability (CFA), shared exclusively with Salon — calls for the IRS to strip the foundation of its tax-exempt status. It alleges that The Daily Caller has used the foundation to effectively subsidize its business, while the nonprofit entity has engaged in political activities in violation of the rules governing its tax status.

"The Daily Caller News Foundation is nothing more than a paper entity created to allow the Daily Caller to cash in on its tax-exempt status," CFA executive director Daniel E. Stevens told Salon.

"The Daily Caller routes donations and expenses through The Daily Caller News Foundation to avoid paying taxes and subsidize its business," he added. "It's time for the IRS to call out this farce for what is and put an end to The Daily Caller's inappropriate reliance on its 501(c)(3) alter ego."

Carlson, now a Fox News primetime host, co-founded the Daily Caller in 2009 with Neil Patel, the former chief policy adviser to Vice President Dick Cheney, who was also Carlson's former college roommate. MSNBC had canceled Carlson's right-leaning show the previous year due to poor ratings, and the two friends conceived of The Daily Caller as a conservative ballast against independent liberal news sites such as HuffPost.

In 2011, the duo formed the DCNF, and in 2013, the IRS granted it tax-exempt status as a Section 501(c)(3). According to its tax filings, the foundation "trains up-and-coming reporters and editors, carries out investigative reporting and performs deep policy reporting." In all caps, it adds: "WITH A PURPOSE OF CONSUMER AWARENESS AND EDUCATION."

The DCNF says it licenses content to any media outlet for free, so it is not an exclusive private content producer for The Daily Caller. But other outlets rarely pick up DCNF content.

The Daily Caller, however, leans heavily on that content. The IRS complaint points to snapshots of the outlet's website, which suggest that the DCNF accounts for about half the content on The Daily Caller site at any given time. A 2017 Center for Media and Democracy analysis found that "virtually everything" produced by the nonprofit foundation ends up on The Daily Caller website.

For these reasons, the CFA complaint alleges that the for-profit outlet benefits from the foundation's tax-exempt status.

First, donations to the nonprofit effectively subsidize The Daily Caller. According to publicly available tax filings, the DCNF pulled in more than $2.5 million tax-deductible donations in 2017, $1.1 million in 2016 and $3 million in 2015. Between 2014 and 2017, the foundation took in about $7.5 million.

The foundation's chief funder is Republican mega-donor Charles Koch, who over the years has given the foundation millions of dollars. That money has effectively been used to bankroll content and staff for The Daily Caller. As a second benefit, those expenses are tax-exempt.

The complaint argues that the commonalities between the entities run deep, beyond "names so similar that a reader of either The Daily Caller website or donor to the DCN Foundation could easily confuse one entity for the other."

Carlson and Patel had for years been highly engaged leaders at both outfits, until Carlson backed away after securing his Fox News contract. Their Washington offices share the same floor of the same building, and their websites and logos are nearly identical in color and form.

They even share staff. As a 2017 Washington Post report pointed out, "Most of the roughly 50 journalists who produce content for The Daily Caller actually work for The Daily Caller News Foundation." Stevens says the employees he has interacted with use foundation and company addresses interchangeably.

However, the same Post article pointed out that the IRS may be reluctant to pursue the foundation, in part due to political optics:

Four years ago, the IRS acknowledged that it improperly targeted conservative nonprofits for scrutiny during the 2012 election cycle. The agency would be reluctant to invite renewed accusations of bias by going after The Daily Caller News Foundation, tax specialists said.

"That this is political, in a large sense, makes it even less likely that the IRS would look at this issue," said Philip T. Hackney, a former IRS attorney who teaches law at Louisiana State University. "There is real danger in them touching such a matter."

The CFA complaint singles out political activity. Because the two entities are nearly indistinguishable, political activity on the part of The Daily Caller may violate the foundation's special tax status, it says.

For instance, The Daily Caller's email newsletter regularly features foundation-generated content. In 2016, The Daily Caller rented its email list to Donald Trump's presidential campaign for $150,000. The campaign used the list to solicit contributions.

Additionally, the complaint alleges that DCNF employees have engaged in political activity in their official foundation capacities, in violation of rules governing 501(c)(3) organizations.

For instance, erstwhile contributor Christianné Allen, now Rudy Giuliani's personal assistant, produced videos for The Daily Caller's website as a foundation employee. But her LinkedIn profile at the time said she was also serving on the Trump Victory Finance Committee — a joint fundraising vehicle between the Trump campaign and the Republican National Committee.

Carlson himself has promoted political preferences in several Daily Caller articles. Indeed, the structure resembles a campaign apparatus, where so-called dark-money nonprofits share resources with official PACs. There are clearly previous examples of nonprofit groups feeding for-profit media companies, such as the relationship between Breitbart News and its nonprofit backers.

However, the Caller's arrangement appears to stand out from both examples for its particular stroke of genius: the idea to subsidize not just the costs of a publication but the actual content production itself.

"Ironically, the Daily Caller recently published an article alleging a liberal nonprofit has illegally benefited the for-profit media company owned by its founder," Stevens said. "Yet it's clear that The Daily Caller News Foundation accepts donations to support the work of The Daily Caller. This improper arrangement is obvious to the Foundation's donors, so should be immediately apparent to IRS investigators. The Daily Caller must abide by the same laws as every other news organization."

Neil Patel responded to Salon's request for comment in a statement suggesting a "left-wing smear job."

"We are not aware of any complaint and can't comment on something we haven't seen, except to point out that we are extremely confident that the DCNF could not be any more above board," Patel said. "To the extent that any complaint was filed, it must be a left-wing smear job designed to harass us, and we will deal with it accordingly."

Tucker Carlson did not respond to Salon's request for comment.