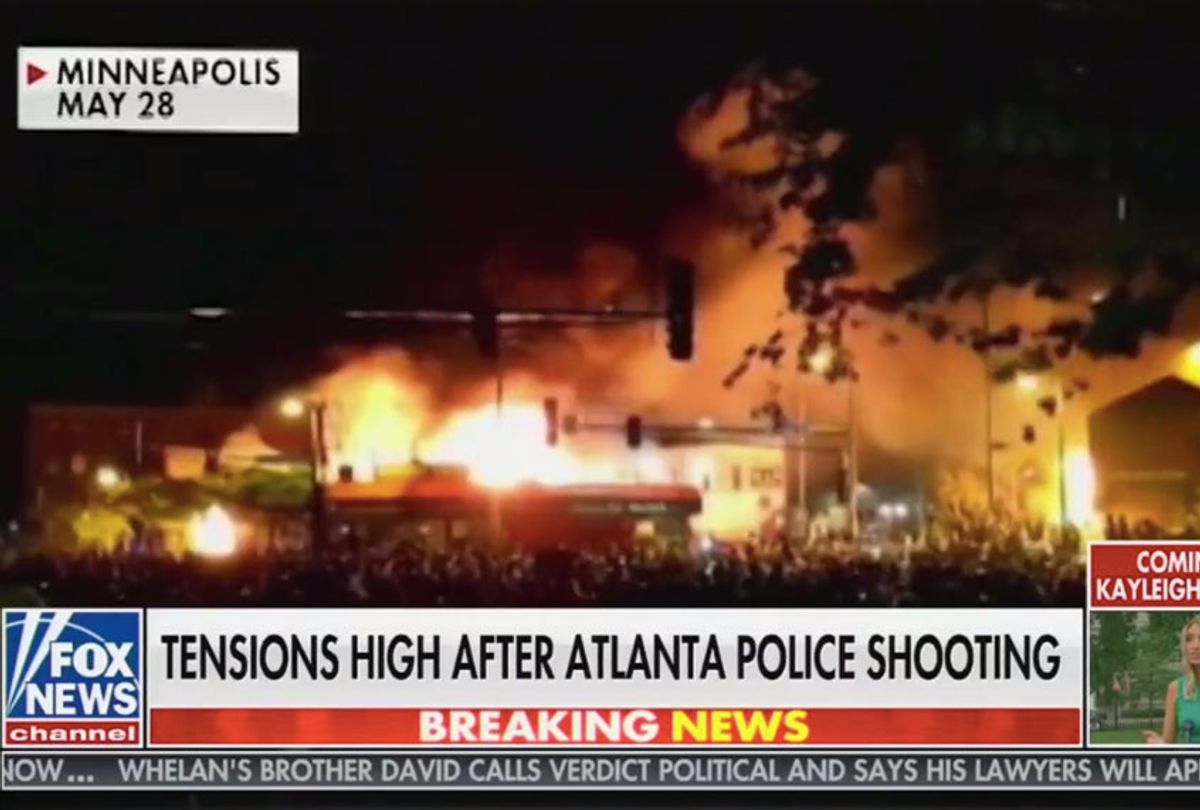 While the majority of the violence against peaceful protesters at Black Lives Matter demonstrations has been orchestrated by police, there's also been a troubling side trend of increasing right-wing vigilantism against protesters. In city after city — and even in small towns — Donald Trump's faithful are shooting protesters, hitting them with cars, or, in one case, attacking protesters with a chainsaw. Add to that multiple situations where self-appointed "patrols" of armed conservatives have shown up at demonstrations to threatened protesters, claiming they are responding to the threat of imaginary antifa violence. It's spiraled so far out of control that even people who have taken no part in the protests are being menaced by gun-toting right-wingers, just because they're black and the Trump fans have deemed them "suspicious."

A great deal of blame for this can be laid at the feet of Trump himself, who has been eagerly responding to the protests by calling them "THUGS" and fantasizing about unleashing lethal violence against them. It's more than fantasizing, really. Unleashing tear gas on protesters so he could have a photo-op was Trump acting on that fantasy, albeit in the most cowardly fashion, making others do his dirty work.

But what may be even more important is the impact of Fox News and other right-wing media outlets, who have been shamelessly misleading their audiences, hyping imaginary threats and creating the rationalizations that right-wing vigilantes — or, more bluntly, domestic terrorists — need and want in order to justify their assaults and threats against peaceful protesters and other innocent people.

The violence and threats have been so relentless that it's hard to keep track of them all. After a man named Nikolas Fernandez ran his car into a group of protesters in Seattle and then pulled a gun and shot someone last week, the Washington Post catalogued at least 19 recent incidents in which people rammed cars or even motorcycles into crowds. One of the most alarming of these incidents came when a truck driver named Bogdan Vechirko drove tanker truck over a crowded highway bridge in Minneapolis. Miraculously, no one was injured. Vechirko has yet to face charges, with his defenders claiming he was merely "confused." Others have observed his history of donating money to Trump as evidence of a possible motive.

Just as often, vigilantes are turning to guns and bombs. In Albuquerque, New Mexico, a man named Steven Ray Baca was arrested for shooting a protester at a rally where a large group of armed militiamen showed up to intimidate anti-racist protesters.

In Oakland, California, an Air Force staff sergeant named Steven Carrillo and another man, Robert Alvin Justus Jr., were arrested after the May 29 murder of two uniformed federal law enforcement officials. Carrillo is also suspected of killing a sheriff's deputy in Santa Cruz, California, on June 6. The suspects appear connected to the white supremacist "boogaloo" movement that has been targeting cops for violence in hopes of provoking a race war in the U.S. Other "boogaloo" movement operatives were arrested in Nevada for a plot to firebomb a park ranger station. Neo-Confederates were arrested in North Carolina after shooting at protesters. A Trump-loving bar owner in Nebraska shot a protester, and is claiming self-defense.

On top of the actual violence, the threat of violence has been wielded across the country. In small towns like Bethel, Ohio; Klamath Falls, Oregon; and Great Falls, Montana, small Black Lives Matter demonstrations have been met with groups of angry and armed white men ready to tangle with what they claim are "antifa invaders." In the small town of Forks, Washington, just outside Olympic National Park, a multiracial family visiting the area on a camping trip found themselves followed and surrounded by a group of armed right-wingers, who sawed down trees to trap the family, accusing them of being antifa. They were rescued by a group of high school students.

Perhaps the wildest incident involved a man named Daniel Peña in the border city of McAllen, Texas, who went after protesters with a chainsaw while shouting racial slurs about Black people. Video of his unhinged behavior was shared approvingly by Trump campaign senior adviser Mercedes Schlapp. When she was called out for it, Schlapp apologized for the profanity — but not the racism or the threats of bodily harm against peaceful protesters.

This stamp of approval for terroristic violence from a Trump campaign adviser is, sadly, not surprising in light of the way Fox News and other conservative media outlets have unsubtly encouraged this kind of vigilante violence to suppress peaceful protests.

"From star host Tucker Carlson's warning that 'violent young men with guns' will soon "make the rules in your neighborhood" to contributor Dan Bongino's declaration that 'this fight is coming to your front door, to every single person watching,' the message going out to its audience is clear: You're in danger," wrote Matt Gertz at Media Matters in an overview of how Fox News is encouraging its audience to believe that the country is practically engulfed in a civil war.

The network has also pushed conspiracy theories about antifa, painting a small and unorganized scattering of anti-fascist activists as if they were an organized and gargantuan army. The network has promoted false stories accusing antifa activists of leaving bricks for protesters around cities and has claimed that the "highest ranks" of antifa (which is not an organization and has no ranks) are plotting invasions of small towns and suburbs.

Laura Ingraham made the outrageously false claim that antifa is engaging in "wanton acts of violence [that] are part of a coordinated effort to eventually overthrow the United States government." There is no evidence of any organized left-wing violence at the protests — no matter what "both-sides" mainstream commentators may claim — still less a conspiracy to overthrow the government.

These kinds of conspiracy theories expand from Fox News across social media. The result is that heavily armed right-wingers feel justified in gearing up and showing up at demonstrations to menace peaceful protesters — and, at least sometimes, to shoot at them or run their cars into crowds.

Whenever these gun-toting Trumpers do lash out violently against protesters, Fox News is here to explain that the protesters have it coming. Fox News correspondent William La Jeunesse blamed the "mob" (read: protesters) in Albuquerque for the recent shooting, not the armed militiamen who showed up to threaten them. Fox News host Greg Gutfeld suggested the country is "heading towards a race war" and of course blamed the people who have exposed the police brutality that has spurred the protests, not police or vigilantes.

Just in case there is still reluctance in some parts of right-wing America to put down protests with violence, Rush Limbaugh is here to tell them to get over it.

"Where are all the people with guns?" Limbaugh asked on his radio show Monday, claiming that "ordinary citizens" (his code for right-wing wackos) are "not pushing back against" the protests nearly enough.

Limbaugh denied he was calling on right-wingers to shoot people, but then went back to complaining that "we've got all these braggarts out there, writing at all these blogs that they've got all the guns," and accusing such people of being cowards for not showing up in greater numbers. It's hard to miss his implication: He's daring his well-armed audience to stage armed confrontations with BLM protesters, implying they're not real men if they don't.

As these multiple shootings and militia-style incidents show, men with guns are showing up. So rants like Limbaugh's only serve to push them to go farther, to show up in greater numbers and perhaps to pull the trigger. (Or hit the gas pedal.) Slapping a "I didn't mean the thing I just said" disclaimer on it doesn't change what Limbaugh is doing.

Trump now trails Joe Biden by nearly 9 percentage points in recent polls. Even with an unfair advantage in the Electoral College, which gives disproportionate power to rural and suburban voters in smaller states, Trump is in danger of losing in November. He plans to cheat in any way he can, of course, which is why he was impeached, but even so, there's a very real chance it won't be enough. So Trump and his supporters in right-wing media are getting desperate. Unfortunately, that's leading them down a dark path of looking to violence as their last, best option.