The Supreme Court saves Trump from himself, twice — will it do the same with abortion?

On DACA and LGBTQ rights, John Roberts is shielding Trump from 2020 backlash. Is he willing to protect abortion? 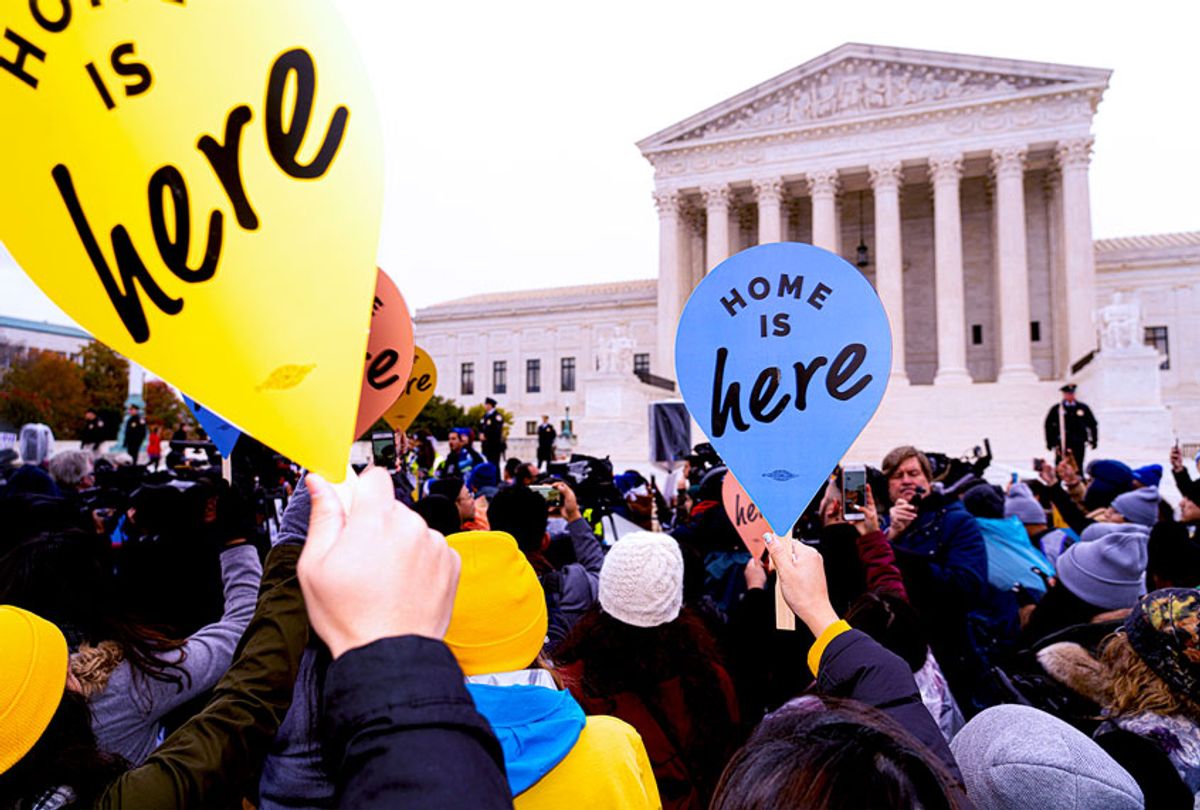 "Home is Here" say supporters of the Deferred Action for Childhood Arrivals, or DACA, assembled in front of the steps of the U.S. Supreme Court on Tuesday, Nov. 12, 2019 in Washington D.C. as the justices considered whether the Trump administration can shut down a program that shields about 700,000 young immigrants, known as "dreamers", from deportation. (Photo by Jeff Malet)
--

For the second day this week, the Supreme Court surprised legal watchers by issuing another decision protecting the rights of minorities against the aggressive assault unleashed during Donald Trump's administration. On Monday, the court issued a momentous victory for LGBTQ rights — one that may ultimately be more consequential than the decision granting marriage equality — ruling that employers cannot fire people based on their sexual orientation or gender identity. On Thursday, in the sole decision released, the court once again gave liberals a reason to celebrate by voiding the Trump's administration's attempt to eliminate the Deferred Action for Childhood Arrivals (DACA) program begun under Barack Obama, which allowed undocumented people who were brought to the U.S. as minors to live free of the threat of deportation.

Chief Justice John Roberts, a George W. Bush appointee, joined the liberals on both decisions, and even wrote the DACA decision. (Justice Neil Gorsuch, a Trump appointee, shocked both the left and the right by writing the earlier decision about LGBTQ rights.) In both cases, conservatives justified their decisions in dry language about legal procedure. Gorsuch argued that the plain text of the Civil Rights Act barring discrimination on the basis of sex covered sexual orientation and gender identity. Roberts argued that Trump's move to end DACA violated the Administrative Procedure Act, an FDR-era law barring "arbitrary and capicrious" executive rule changes, in language that almost eerily anticipated the arbitrary and capricious nature of pretty much everything Trump does.

Despite the dry legalistic language, however, both these decisions should also be understood as political. Not because Roberts or Gorsuch has suddenly discovered a vein of compassion or switched to liberal politics — and we should all expect their pro-corporate and anti-regulation agenda to return in force in future decisions. It's because Roberts, in particular, has shown a canny understanding of how to save Trump from himself in an election year that's already been defined by intense anti-Trump backlash.

The only real question is whether Roberts, a notorious anti-choice ideologue, will keep it up through the rest of the term — and will actually be willing to protect Trump by protecting abortion rights.

Saving Trump by going against his expressed wishes — and make no mistake, this president is opposed to the rights of immigrants, LGBTQ people, women and pretty much anyone else who isn't a rich white man — may sound counterintuitive. But if that's what Roberts is doing, it's actually pretty clever.

Trump is already one of the most unpopular presidents in modern history, in no small part because he's on the wrong side of public opinion on so many important issues. If the Supreme Court — complete with two Trump appointees, one of whom, Brett Kavanaugh, was confirmed by Senate Republicans even after he was credibly accused of sexual assault — issues high-profile rulings that buck the opinions of most Americans, that will only serve to galvanize the anti-Trump opposition and make it even harder for Trump to win the November election.

Both DACA and LGBTQ rights are popular, and increasingly so all the time. A recent CBS News poll found that 85% of Americans support the right of undocumented immigrants who arrived as children to stay in the U.S. An even larger majority, 93%, supported the equal employment rights of LGBTQ Americans in a recent Gallup poll. Even the majority of Republicans or Republican-leaning independents agree with both views.

Make no mistake, most Republicans will still vote for Trump, whatever their views may be on those subjects. But there's a small handful of more moderate Republicans and right-leaning independents who have soured on the Trump presidency, especially as he's flailed around and bungled the coronavirus response and engaged in grotesque race-baiting and threatened violence toward people who are in the streets protesting police brutality. Trump's only hope of winning those wobbly conservative voters back is to convince them that he's not actually bad as the liberals claim. In other words, he may talk a big game but ultimately isn't a big threat to marginalized groups toward whom such voters may feel pangs of compassion.

In light of that, Roberts just did Trump a huge favor. He gave fence-sitting voters an excuse to vote for Trump, one they can justify by telling liberal friends and family, Hey, Trump's not that bad! Look, both DACA and LGBTQ rights survived, right?

(Don't bother trying to argue with the logic of this by noting that Trump himself bitterly opposed these rulings. It's a rationalization, and rationalizations are often illogical.)

It is no exaggeration to say that if Trump ends up winning what promises to be another agonizingly narrow race in 2020, it's because Roberts took one for the conservative team and issued rulings that allowed Republican voters who were feeling pangs of doubt an excuse to stay on board.

The big question now is whether abortion rights will also survive, based on the logic of this political calculus. The court is set — probably next week — to issue a ruling in June Medical Services vs. Russo, which looks at whether states can ban abortion through the backdoor method of burying clinics in medically unnecessary regulations that force them out of business. If the court rules against clinics on that basis, it would amount to a functional overturn of Roe vs. Wade (without technically doing so).

If Roberts is as canny as I think he is, he'll vote with the pro-choice side on that case, as well. More than three-quarters of Americans support keeping Roe vs. Wade, even as many of those people still harbor negative views of women who have abortions. He also has a perfect excuse to hide behind the same kind of dry, legalistic reasoning that he used in the DACA and LGBTQ rights cases: The Supreme Court has already ruled against the use of arbitrary regulations to run abortion clinics out of business, and he'd just be upholding the rule of precedent, not expressing any final, fixed position on Roe.

Roberts no doubt remembers that the Women's March of 2017 was the largest protest in American history, and remembers the Senate corridors packed with furious feminists during the Kavanaugh hearings. If negative rulings on LGBTQ rights or immigrant rights could have awakened election-year fury, that goes double or triple for a backdoor ban on abortion. In an election year, that would do immense harm to Trump's already shaky re-election chances, not to mention those of numerous down-ticket Republicans on the ballot in November. To save both Trump and the Republican Party from themselves, the chief justice may conclude he needs to save abortion rights.