"DOJ hasn't attempted this before": Is Barr trying to block Bolton's memoir to stroke Trump's ego? 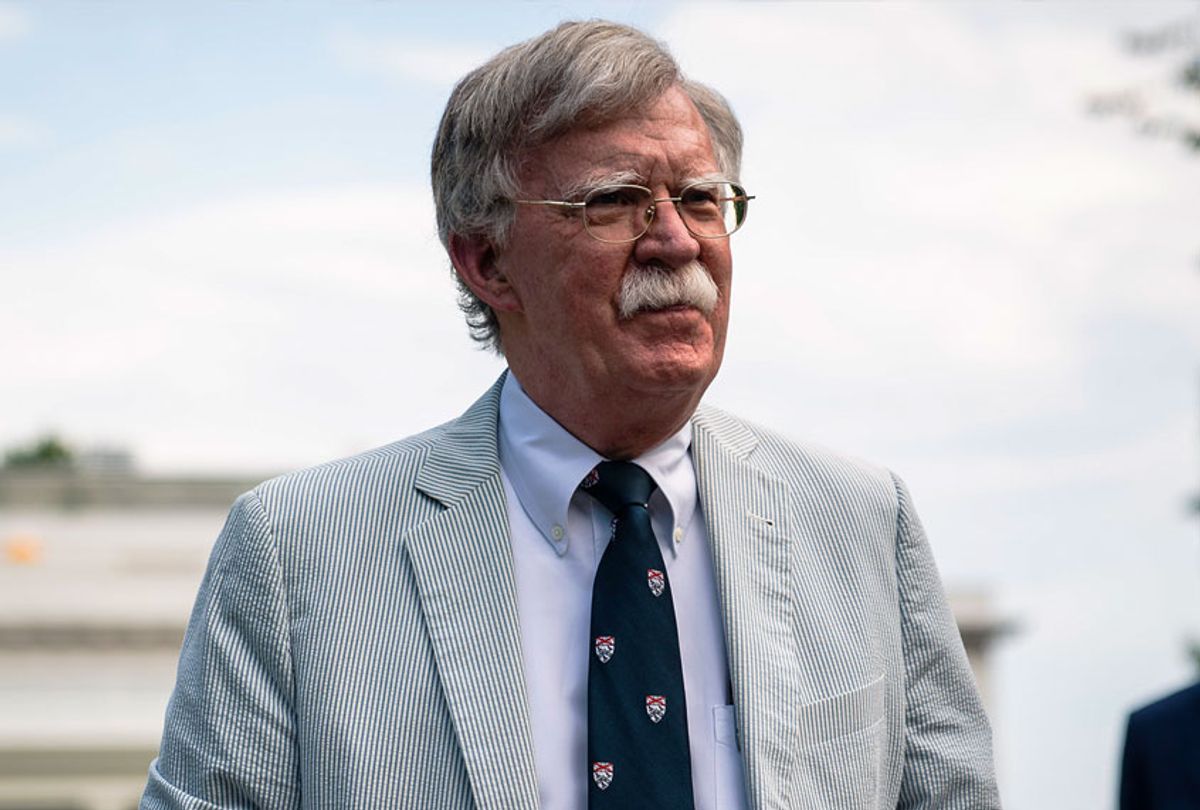 The Department of Justice has asked a federal court for an emergency order to block the publication of a new White House memoir by former Trump national security adviser John Bolton, over allegations that it violates agreements governing the disclosure of classified information.

The government filed the order Wednesday night, only one day after filing a civil complaint demanding that Bolton delay publication. The Justice Department has also reportedly mulled criminal charges against Bolton over the book's publishing, a move which legal experts say would be without precedent.

Bolton's book, "The Room Where it Happened," is slated for publication June 23, and 200,000 copies have already been bound and shipped to warehouses, reviewers and retailers.

"To be clear: Defendant's manuscript still contains classified information, as confirmed by some of the government's most senior national-security and intelligence officials," the department said in its eleventh-hour filing.

"Disclosure of the manuscript will damage the national security of the United States," it continued.

Lawyers for Bolton responded the following evening, by pointing out the last-ditch was essentially pointless with only days left until the book hits shelves.

"The government cannot plausibly argue that Ambassador Bolton has power to stop the Amazon delivery trucks in America, unshelve the copies in Europe, commandeer the copies in Canada and repossess the copies sent to reviewers or in the possession of major newspapers," Bolton's team wrote in its response.

The escalation came as multiple news outlets published excerpts, including the explosive allegation that Trump asked Chinese leader Xi Jinping to help get him re-elected. During a G-20 summit in Japan last June, Bolton claims that Trump was "pleading with Xi to ensure he'd win," insisting that "increased Chinese purchases of soybeans and wheat" were vital to his base and his chances against former Vice President Joe Biden.

At the time, Trump was simultaneously trying to pressure another foreign head of state, Ukrainian President Volodymyr Zelensky, into helping him defeat Biden, his presumed opponent. Bolton infamously characterized this plot, which led to Trump's impeachment, as a "drug deal."

"I am hard-pressed to identify any significant Trump decision during my White House tenure that wasn't driven by re-election calculations," Bolton writes in the book, saying that he reported those incidents to both Attorney General William Barr and White House Counsel Pat Cipollone.

Bolton added that he would have quoted Trump's exact words from the G-20 meeting, but the "government's prepublication review process has decided otherwise." It is unclear why government reviewers would want to block the words Trump spoke to Xi, though not classify the story itself.

The Justice Department's civil complaint alleges that the 592-page book, which the New York Times describes as a "tedious" read, contains classified information which could present "grave damage" to national security and publication would put Bolton "in clear breach of the agreements he signed as a condition of his employment."

Bolton's attorney has claimed that the book does not contain any classified material, and points out that the former Trump official has worked with the National Security Council since December to vet and edit the manuscript.

Legal experts do not see how it is possible to rewind the clock now that copies have shipped around the world.

"I give the DOJ credit: They went for broke and pulled out a really creative argument," Bradley Moss, a national security attorney who has shepherded several clients through government pre-publication reviews, told Salon in a phone call this week.

"Bolton doesn't control the book any more," Moss said. "So instead they asked the court to issue an emergency order against the publisher and the commercial resellers."

"Except it's impossible to implement now that the book is everywhere — overseas. How are they supposed to comply?" he asked. "In the end, I think it's bound to fail."

Moss said he had never before seen such a move, and pointed to Wednesday's watershed of incriminating and embarrassing revelations from excerpts as the likely motivator.

"It's ultimately a frivolous motion filed to assuage Trump's ego," he said. "There's a reason DOJ hasn't attempted this before."

The national security attorney also pointed out the timing.

"If they really wanted to stop publication, they could have stopped him weeks ago," he said, noting that Bolton told the government in early June that he would move forward with publication. "Why do it all of a sudden?"

Barbara McQuade, a former U.S. attorney, told Salon that she thinks "there is room for genuine debate here, but the Trump administration's credibility challenges make me skeptical of its position."

Though the book must go through pre-publication review, McQuade pointed out that Bolton's contract only required that he give the government a "reasonable opportunity." That period usually takes 30 days.

"Here, the government has had his book for six months, and a first reviewer already cleared it," McQuade said. "These facts create an impression that the government may be trying to delay publication to avoid disclosure of facts that are not classified but embarrassing to the president."

In contrast, Moss said long delays were not uncommon based on his experience.

"The courts are aware of the 30-day timeframe, but they've repeatedly said they don't care," he said. "I've had cases where it's taken years to get a book approved. The timeline for the back-and-forth with Bolton has been light speed by comparison."

However, there is a strong possibility that the government will succeed in garnishing the book's profits.

"Unless something crazy happens, the government will get its pound of flesh, and Bolton will send all proceeds to the U.S. Treasury," Moss said. "Case law is clear: If you don't complete the review and publish anyway, the government gets your money."

The Supreme Court has upheld pre-publication restrictions for federal employees whose work exposed them to classified information.

In 1980, the court ruled in Snepp v. United States that a former CIA agent violated his nondisclosure agreement when he published a book about agency activities in South Vietnam without organizational review. The court ordered the author to submit all profits to a government trust.

A criminal indictment, however, would be tricker for all parties involved.

"I will consider every conversation with me as president highly-classified," Trump told reporters Monday. "I told the attorney general before that I will consider any conversation with me as president highly-classified. So that would mean that if he wrote a book and if the book gets out, he's broken the law. And I would think he would have criminal problems."

"I would hope so," the president added.

Though Moss believes that Trump will push Barr to pursue a criminal indictment, it is unclear whether such a case would be viable.

"It doesn't matter in a civil case exactly what information Bolton disclosed, but it's paramount in a criminal case." he said. "DOJ will have to nail down what the specific information is and prove that it remains classified."

Federal prosecutors were reported Wednesday to be mulling an indictment.

"This weird thing is only going to get weirder if criminal charges are filed," he said. "We've seen countless prosecutions of leakers of classified information, but as far as I'm aware, this would be the first time criminal charges would arise out of the pre-publication process."

McQuade said that Trump's classified declarations were incorrect — and would only harm his case.

"Classified information is only information that, if disclosed, could cause harm to the national security. Classification is also limited to certain categories of information, such as sources of information, methods of collection, military capabilities and the like," she said. "President Trump could not, for instance, classify a conversation in which he ordered a Diet Coke."

There also remains the question of Trump's unique requirement that all White House employees sign non-disclosure agreements specific to their post, which bar them from disclosing non-public information they come across in the course of their employment.

However, multiple former White House employees have published books that reveal harmful or embarrassing information about the administration and the president, such as Omarosa Manigault's 2018 memoir. The White House has so far not yet made good on its threats, which experts additionally believe are unenforceable.

"The only poetic justice in this case is that the government is seeking Bolton's profits, including his $2 million advance," McQuade remarked.

"If all Bolton wanted was to tell his story, he could have done so by testifying before Congress at the impeachment inquiry," she said.