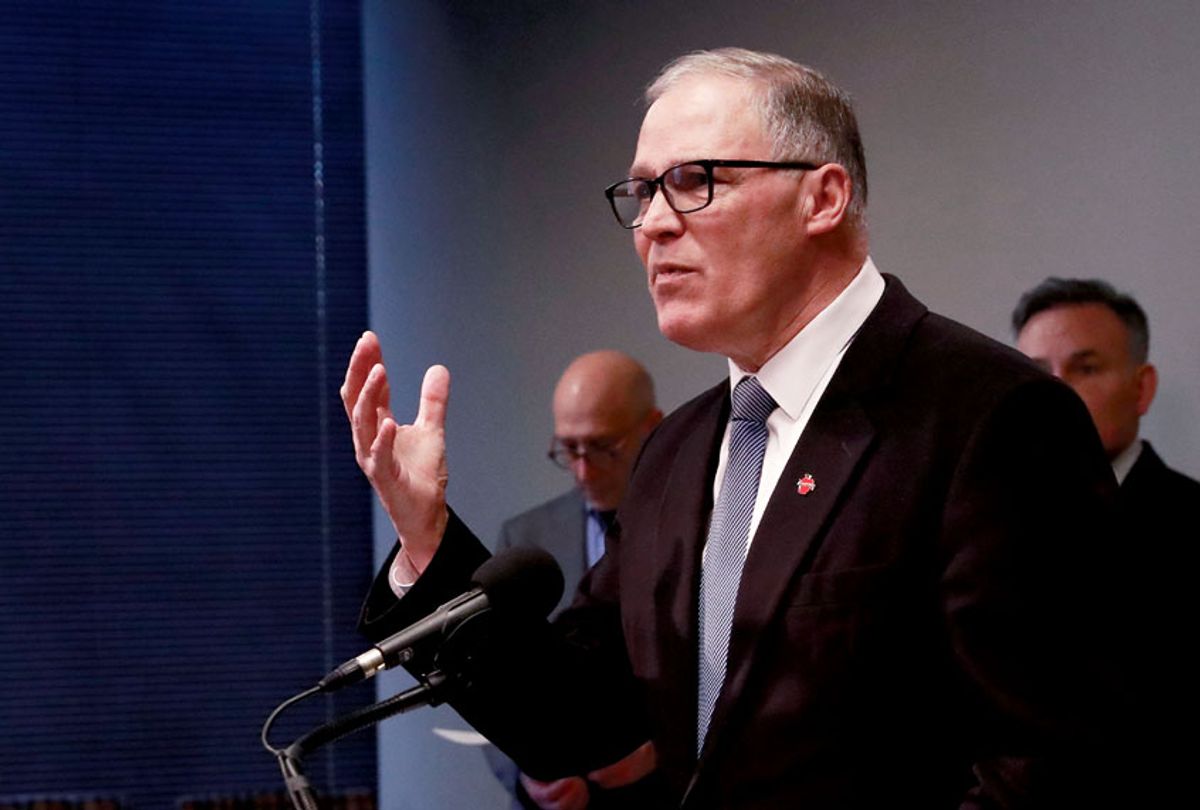 Speaking to Salon on Thursday, Washington Gov. Jay Inslee (D.) explained that President Donald Trump has failed the people of his state — and declared that the best thing he could do for them is resign: "We have our hopes."

The two politicians, Inslee and Trump, have been locked in an ideological battle that has become a war of words. Washington state was hit early and hard by the coronavirus; the state's drastic action, informed by public health experts, significantly slowed the virus' spread. Inslee's approach stands in sharp contrast to Trump's attitude toward the pandemic, which public health experts believe was tremendously bungled: from disbanding the global health national security team prior to the outbreak to denying that a crisis existed during a crucial period of more than two months after it began, the president's poor judgment is directly responsible for thousands of deaths and the loss of millions of jobs.

Trump's interactions with Inslee have been, in a sense, a microcosm of this larger ideological battle.

When Inslee criticized the president for his response to the pandemic, Trump replied by referring to the Washington governor as a "snake" and said that Inslee should not be praised "because he will take advantage." Trump also argued that Inslee "shouldn't be relying on the federal government" and described him as "a nasty person."

After the Seattle Capitol Hill Occupied Protest took over 6-12 blocks of Seattle Trump bashed Inslee's response, tweeting that Inslee was a "Radical Left governor" and threatening to use the federal military to end the peaceful protest.

Inslee, for his part, has condemned Trump on a number of occasions, describing the president's tweets as "grossly irresponsible" and "dangerously bombastic" and mocking his typos while telling him that he should "stay out of Washington state's business."

During a conference call with governors, Trump said that the federal government was prepared to serve as "backup" for the states experiencing outbreaks, to which Inslee retorted: "We don't need a backup. We need a Tom Brady," a reference to the Super Bowl winner and former New England Patriots quarterback (now playing for the Tampa Bay Buccaneers) who is on friendly terms with the president.

"I would said Russell Wilson [the Seattle Seahawks' quarterback and a fellow Super Bowl winner], but I wasn't sure he knew Russell Wilson," Inslee told Salon. "And I basically said, 'Look, in World War II [President Franklin D.] Roosevelt didn't say 'I'll back up Connecticut. Good luck, Connecticut, building a battleship!' That total failure of leadership set us back months."

Inslee stressed during his interview with Salon that his problem with Trump is based entirely on what he feels to be the president's failures to address a major crisis. Talking to Inslee, it becomes clear that he isn't picking a political fight; he is deeply frustrated over what he sees as the president's inability to govern.

"We have someone in the White House who is grossly incompetent, constantly divisive, and feels that anger and violence is the answer to every human and community challenge. That's the fundamental problem," Inslee told Salon when asked about the war of words between himself and the president. "We also have a person who has totally failed or largely failed in his obligation to help Washington state through the COVID-19 crisis and the United States." (Salon reached out to the White House for their response, and has not heard back.)

The Washington governor claimed Trump has "rejected responsibility to help us develop PPE [personal protective equipment] and early testing" and has "consistently, consciously and willfully tried to deceive Americans into thinking that COVID-19 was not a dangerous thing, which has made it very much more difficult for us to be successful in getting people to socially distance and where masks." According to Inslee "that's the fundamental problem, because we have people losing their lives as a result of this virus."

When asked if Trump ever carried through on his veiled threat about limiting aid to governors who are not "appreciative," Inslee said that "we've suffered equally with other states from his gross incompetence and dereliction of duty, but I can't say that we've been singled out other than the constant juvenile insults which sometimes — I'm looking for the right word — very insecure people indulge in."

Salon also asked Inslee for his thoughts on the Capitol Hill Occupied Protest, formerly known as "CHAZ." After noting that one of our editors visited the protest and encountered homeless people who were happy because they had found a safe place with ample resources like food and medicine, and said they did not have to worry about being harassed by the police or subjected to anti-homeless violence, Inslee expressed sympathy for their plight.

After emphasizing that the ultimate responsibility for figuring out how to handle the protests rests with Seattle's mayor, Jenny Durkan, Inslee said that "it's important to have, simultaneously, peaceful protests and police services, and all of those need to be accommodated. And I hope that they will be."

When the conversation moved to Trump's handling of the crises of his presidency, and of the Black Lives Matter protests specifically, Inslee was asked if Trump is a racist. He answered in the affirmative.

"Clearly the president has missed almost every single opportunity to unite us and really be a leader in the fight against racial injustice," Inslee told Salon. "He has continually looked for ways to inflame the situation and support those and enable those who've used racial division. So, I don't know what else to call it when you continually try to fan the flames of racial division. And I think it's fair to say that he has done that."