Anyone of any sexual orientation, gender, or other relationships status can be in a queerplatonic relationship 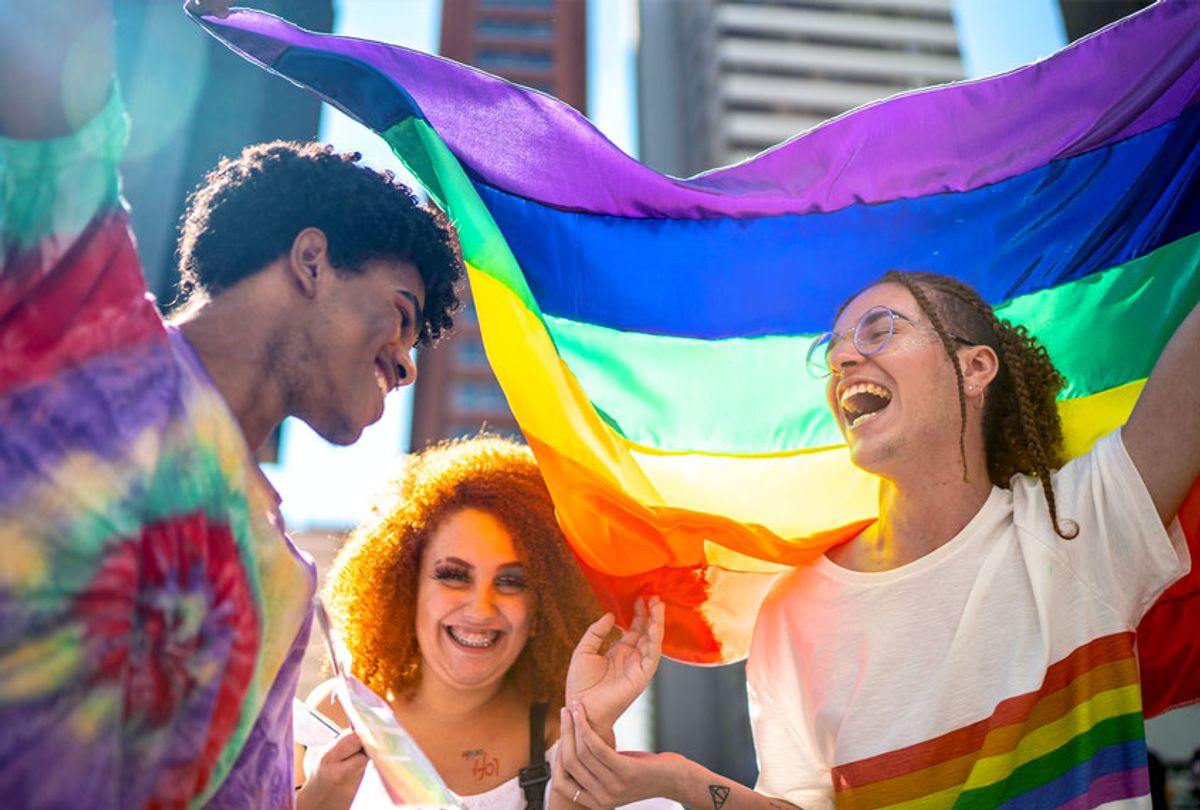 Excerpted from "How We Show Up: Reclaiming Family, Friendship, and Community" by Mia Birdsong. Copyright © 2020. Available from Hachette Go, an imprint of Hachette Book Group, Inc.

There is a line to cross toward more intimacy and interdependence when we put aside the modern conventions of friendship and get up in one another's business. On the other side is not a single alternative or even just a handful of options. There is a whole spectrum of possible relationships. I can look at each of my friendships as singular pairings with its own culture, standard of operating, behavioral norms and communication approach, expectations and commitments. The culture of a friendship is something we can make up if we take the opportunity to talk about what we want it to be. That infinite possibility is freeing.

The space on the other side of that line may be unconventional for cisgender heterosexual people, but among many of my queer friends and family, I see a different norm that points me forward. Queer people have long articulated and practiced a wider spectrum of relationships than cishet people.

The idea of platonic boyfriends/girlfriends/partners and "Boston marriages" (a 19th-century phrase describing two women who shared a life and lived together without the support of a man) has been around for a while. Back in the day, sometimes these relationships were actually sexual relationships between folks who couldn't be out as gay because it was illegal, socially unacceptable, and dangerous. But sometimes they were intimate nonsexual friendships.

A more modern umbrella term for these relationships is queerplatonic. The word was coined, defined, and redefined by asexual and aromantic people to describe a relationship that is not romantic, but emotionally closer than what we generally think of as friendship. The "queer" part is not about sexuality, but about the queering of our ideas about what relationships look like. As writer and activist Shon Faye puts it, "Queer is about removing labels and replacing them with a question. It is a side eye and a challenge back to mainstream society and politics. It says, 'I don't know the answer, but why are you asking the question?'" Queering relationships is rejecting the restraints of convention, but it's also liberatory truth-finding. It allows us to look at a relationship (and so many other things) stripped of preconceptions and ask, What is this really? What are the components? What is happening inside of it? Anyone of any sexual orientation, gender, or other relationships status can be in a queerplatonic relationship.

Having more language and examples that articulate a way to be in relationship with others outside conventional understanding is affirming because I have, and want more, relationships like that. Even though I'm not aromantic or asexual, the paths people with those identities are forging to be wholly who they are makes room for the rest of us too. People are living into identities that aren't accepted or even recognized by society at large. Their insistence on self-definition creates space for all of us to be self-determined in our identities.

Let me be very clear about a few things right now, though. There is a lot of writing about queerness, queering, and queer theory. I have read, heard, and been schooled by loved ones on some of it. But I am not an expert on queerness. If you aren't either, I invite you to join me in the lifelong role of student. In writing about this, I very much want to stay in my lane. As a cishet person, that lane is primarily about interrogating homophobia, heterosexism, relationship hierarchy, and the binary norming of gender, sexuality, and identity to do my part dismantling systems that uphold all of that, including the ways in which I personally uphold them. But it's not just about increasing the absence of oppression. It's also about practicing something else in its place. It's about increasing liberation.

BUT! This is not about appropriating or gentrifying queerness. I don't get to wrap a rainbow around my relationships while holding tightly to the benefits of being a cishet person, and not show up for queer people. Straight and/or cisgender folks don't get to be the people who benefit most from the work queer people do to make themselves more free. I have a responsibility to listen, to care for, to defend, to protect. I'm often doing it because I know it's the right thing to do and it aligns with my values and beliefs. But more and more, I'm doing it because I see clearly that my freedom is tied to queer people's freedom.

I'm trying to step outside the narrow list of possibilities that we've been given. Part of this means squashing the relationships hierarchy that says a monogamous romantic/sexual relationship is infinitely more important than the other relationships in our lives. For me, that doesn't mean diminishing my marriage, but elevating other relationships.

It's one thing to feel that something else is not really possible. In our society, systems create very real constraints for people who have limited money or are women, queer, or have a disability, for example. But we also put constraints on ourselves, we live inside them, we hold on to them hoping for the promise we think "normal" holds.

"I think of my family as a queer family even when it's full of straight people. This is an unconventional approach to family," Gabi, who is queer, transgender, and genderqueer, told me, reflecting on the idea that "queering" is about bucking convention—not just for its own sake, but because it's what actually works. They told me, "I love the defiance of the bumper sticker 'Not gay as in happy but queer as in fuck you.'"

Gabi is "mixed race, white-presenting, Mexican American, and (at least) fifth-generation Californian" on both sides of their biological family. Their earliest memories are being at family gatherings, looking around the room and thinking, "These aren't my people. I don't belong here, but I need to wait it out, and then my people will come and get me." This feeling of being out of place and not belonging was compounded by not having a sense of what something better looked like. But they did have an idea of what it would feel like to be at home with people, to be loved and love them, and they managed to create that for themselves.

When Gabi was in middle school, their parents' best friend was a woman called Gwen. "She was amazing. She was this supercrotchety, high fem, old-school lesbian. She was a thrift store dressing person, and had a dog, and drove a Jeep, and chain-smoked, and she had no filter." Gabi's parents didn't really have any other friends, so Gwen's friends became their friends and, by extension, Gabi's aunts, uncles, and cousins.

When Gabi was in their early twenties, Gwen was diagnosed with terminal cancer. ("The doctor said, 'I think you've got three to six months,' and she looked right back at the doctor and said, 'I don't think it'll take that long.' She died twenty-three days later.") People came to see her to give  her love and say good-bye. One of those people was an ex-girlfriend called Deborah. "She was just the coolest fucking person I'd ever met. She kind of reminded me of George Carlin in her delivery of everything she said. She was an artist—a painter—living in New York." After Gwen's memorial, Gabi and Deborah stayed in touch, sometimes sending each other sketches in the mail. They'd visit each other when Gabi was in New York or Deborah was in the Bay Area, where Gabi lives.

On one visit, Deborah was behaving strangely, like she wanted to say something but wasn't quite ready to or didn't know how. Gabi's fear was that she was dying. After Deborah left, Gabi got an email from her: "Sorry, it's weird what I was trying to ask, but can I put you down as my power of attorney? Can we talk about advanced health-care directives?" Deborah's other friends were either her age, older, or "already dead" and she didn't want her estate going to her biological family because she wasn't close to them. Gabi of course said yes.

In reflecting on their relationships, Gabi said, "I don't even know what the trajectory of the geometry of something like that is. My parents' best friend when I was in middle school, who I came to think of as my godmother, even though she wasn't, her girlfriend from the '70s, then buddy, became one of my cranky hangout and beer buddies, and now we're like family. It makes no sense, but I love it."

Perhaps part of our challenge in thinking expansively about our friendships is that we're limited by the word friend. Like community, the word friend has come to be so broad as to have lost meaning. We can have thousands of "friends" on social media, including people we have never met and make no effort to know. Friend can describe a work acquaintance whose personal life you know nothing about or a close intimate with whom you share history and your realest self. There are beautiful words in languages other than English that get at some of the richness and variety of friendship, like the Gaelic phrase anamcara, which literally translates as "soul friend"; or the Aramaic havruta, which means "friend" and, depending on your brand of Judaism, can mean a person with whom you study the Torah or someone with whom you engage in self-education; or the Japanese nakama, which can mean "buddy" or "people who you can trust in all things." And then there is the Black American practice of applying familial words to friends who are like family, like auntie or brother. Knowing that there are other words supports my ability to see the possibilities that were previously obscured to me even if I never use them.

While part of what I'm working toward is flattening the relationship hierarchy, I'm also clear that my friendships are part of what keep my marriage working. I get a range of love, affirmation, attention, inspiration, perspective, and engagement that isn't dependent on my husband or the state of our relationship. My husband, as wonderful as he is, does not have much to offer me when it comes to some things that are important to me, like narrative change strategy or Black feminist liberation (and I don't have much to offer him when to comes to music creation or particle physics). When I am pissed at him, my friends allow me to vent, but also move me toward empathy and reconciliation. And there is a deep joy and rightness with the world that I get from sitting in the presence of my closest girlfriends, loving one another, laughing, eating, drinking, and being unapologetically ourselves, something that no man will ever give me.

Mia Birdsong is a Senior Fellow of the Economic Security Project and the author of "How We Show Up: Reclaiming Family, Friendship, and Community" (Hachette, June 2020). In “More Than Enough,” her podcast miniseries from The Nation, she expands the current guaranteed income movement by tapping into the voices and visions of low-income people. Mia lives and dreams big on the occupied land of the Chochenyo Ohlone people (AKA Oakland, California).