"Lactose against intolerance": How milkshakes became a tool for protest and sparked police mistrust

From poison scares to tampons, why a humble dairy drink has politicians and law enforcers shook 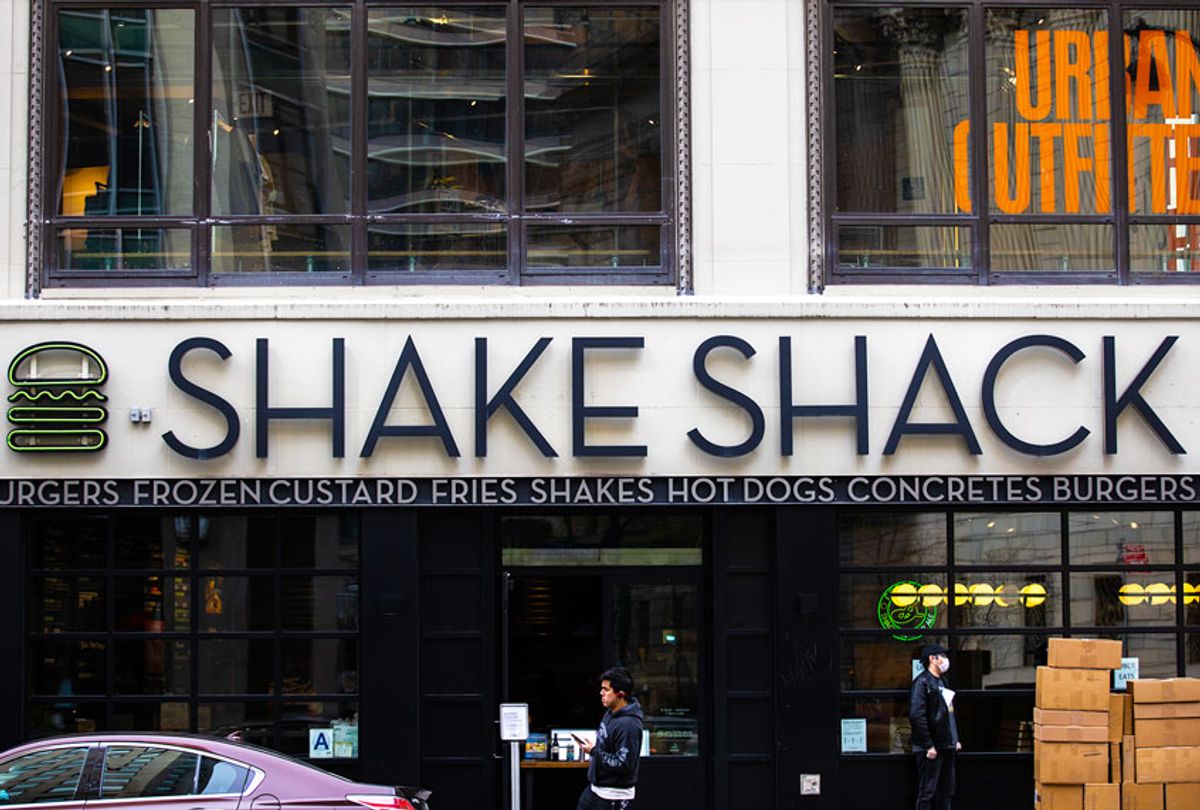 On June 15, an NYPD forensics team arrived at the hip burger joint Shake Shack at 200 Broadway in Manhattan, armed with caution tape and a series of yellow, numbered placards. The sixth was gingerly placed next to what appeared to be an empty milkshake cup that had been retrieved from a nearby garbage can.

A few hours earlier, three officers from a Bronx precinct had ordered milkshakes — strawberry, cherry, and vanilla — from that Shake Shack location. According to the New York Post, the shakes apparently tasted off, so they threw them out and complained to a manager, who gave them vouchers for free food or drink on their next visit.

Then things escalated very quickly: After telling their sergeant about the milkshake incident, a supervisor sent an Emergency Service Unit to set up a crime scene at the Shake Shack. The officers in question were sent to Bellevue Hospital to be examined.

An email was soon sent out to the city's police unions, stating six officers had "started throwing up after drinking beverages they got from shake shack on 200 Broadway," which was followed up with by a post by The Detectives Endowment Association saying that several officers had become ill after being "intentionally poisoned by one or more workers at the Shake Shack."

But none of the officers had actually become sick.

According to The Post, the officers who had been taken to the hospital "were examined and released without ever showing symptoms." It was later revealed that the drinks were requested via a mobile app, so there was no way for the Shake Shack employees to know a member of the NYPD had placed the order, nor was there an opportunity to spike or poison the drinks once the uniformed officers entered the restaurant because the drinks were already pre-packaged and waiting for pick-up.

The strange taste? Residual milkstone remover, an acidic solution used to combat buildup in dairy equipment. The machine had just been cleaned before the officers placed their orders.

This is a story that truly encapsulates the heightened tensions between protesters and police, which has resulted in some similarly contrived conspiracy theories (like the "buses full of antifa" hoaxes that spread panic through a number of small towns across the country); but on a more superficial level, it's also a reminder of how milkshakes and other frozen dairy drinks have become an increasingly common tool for political dissent and the subject of police suspicion

"Milkshakes have replaced eggs as the protest projectile of choice," wrote Dan Kaszeta for "The Atlantic" in May 2019.

Earlier that month, Brexit Party leader Nigel Farage had been doused with a banana-and-salted-caramel  milkshake while campaigning for the European Parliament elections in the English city of Newcastle; before that, Tommy Robinson, the anti-Muslim founder of The English Defence League, had been "milkshaked" twice in as many days, while Carl Benjamin, a British anti-feminist YouTuber,  faced four milkshakings over a one week period.

The appeal for protesters is apparent. Milkshakes are cheap, easy to acquire and transport, and are easily overlooked — that is, until they are dripping down the face and clothing of the person who is being protested. (Farage may disagree with that last point. After he was milkshaked, he allegedly told his security detail "You could have spotted that a mile away.")

It became enough of a problem that British law enforcement briefly tried to make it impossible to buy milkshakes near political rally sites. The McDonalds in Edinburg temporarily stopped serving frozen treats in compliance; Burger King kept serving as usual, prompting some alt-right pundits, including  the white nationalist podcaster Stefan Molyneux, to accuse the chain of "endors[ing] political violence."

Slogans for milkshaking soon began to appear on social media, like "The Revolution will be Pasteurised!" and "Lactose Against Intolerance!" Academics and writers started to theorize about what the act symbolized.

"Today's politics are hugely performative," says Dr Ivan Gololobov, a politics teaching fellow at the University of Bath who specialises in radical youth subcultures and anti-politics, told "The New Statesman."

"Street action itself is worth almost nothing if it does not have an online follow-up," he said. "Milkshake on a figure who pretends to be serious and well-established has become an incredibly powerful image destroying the platform of seriousness for the likes of Robinson and Benjamin."

But as Kaszeta — who is a former White House Military Office adviser on chemical, biological, and radiological threats — wrote, "Sometimes a milkshake is just a milkshake."

He recounted an incident where a frozen Frappuccino had been tossed at his team's van.

"For all the paranoia among some of my colleagues about hydrofluoric acid inside of eggs, I never found any,"  Kaszeta wrote. "The water balloon was a water balloon. The apparent Frappuccino contained coffee, milk, and sugar when I tested it, leading me to assess that it was, in fact, a coffee drink."

However, the Portland Police never released any physical evidence supporting that claim, while Popular Mobilization, the anti-far right group that made the milkshakes, provided the recipe on Twitter (30 coconut-based ice cream, 15 gallons of cashew milk, a "group of cute queers in booty shorts").

A nearly identical situation transpired earlier this month in New York City when the NYPD put out an internal report — which was covered by the New York Post — warning that hardened concrete made to look like "chocolate chip ice cream" had been found near the site of a protest following the police killing of George Floyd. The note urged officers to be wary of these potential weapons.

"The Cups were filled with cement and made to look like CHOCOLATE CHIP ICE CREAM," the alert read in part.

Twitter users soon pointed out, however, that the concrete was placed in espresso cups that had been cut and labeled with the term M160, the name of an industrial mortar mix, meaning they were likely test samples, which are commonplace on construction sites. There was no evidence they had been made or used by protesters.

Like the Shake Shack and the Portland protest debacles, this was another unfounded rumor of malfeasance shared by the police that soon became public speculation Should officers of the law be vigilant about their safety and the safety of those around them? Of course, but this type of misinformation, which has been released before verified, seems only to serve as a tactic to further tensions between police (and their supporters) and protesters. It distracts from the real issues at hand of how systemic racism plays a role in police brutality.

That said, it doesn't look like there's an end in sight to reports of potential dairy-based threats.

As Vice wrote Tuesday, an off-duty LAPD officer allegedly found a tampon in a blended coffee drink he'd purchased at a Starbucks inside a Target in Diamond Bar, and later filed a report with the Los Angeles Sheriff's Department.

"This disgusting assault on a police officer was carried out by someone with hatred in their heart and who lacks human decency," the LAPD's union told Bill Melugin, a reporter for the local Fox affiliate in Los Angeles.

"According to Melugin's reporting, the officer could only have been identified by their police credit union debit card," Vice reported. "As anyone who's been in a Starbucks since the coronavirus pandemic began knows, though, cashiers don't handle debit cards."

As the story goes, then, the cashier would have had to closely scrutinize the officer's card as they ran it through the machine and alert a barista to their identity; the barista, making the drink in plain sight, would have then have had to acquire a tampon and put it into the drink after it had been through a blender.

Is it possible? I mean, sure. Vice reporters carried out their own experiment, soaking 10 different kinds of tampons in 10 different kinds of Frappuccinos. After a series of measurements and photo analysis, they couldn't definitively rule out that the object in question was a tampon, but the question remains how and who placed it in the drink — and whether the Frappuccino was really just a Frappuccino when it was handed over the counter.