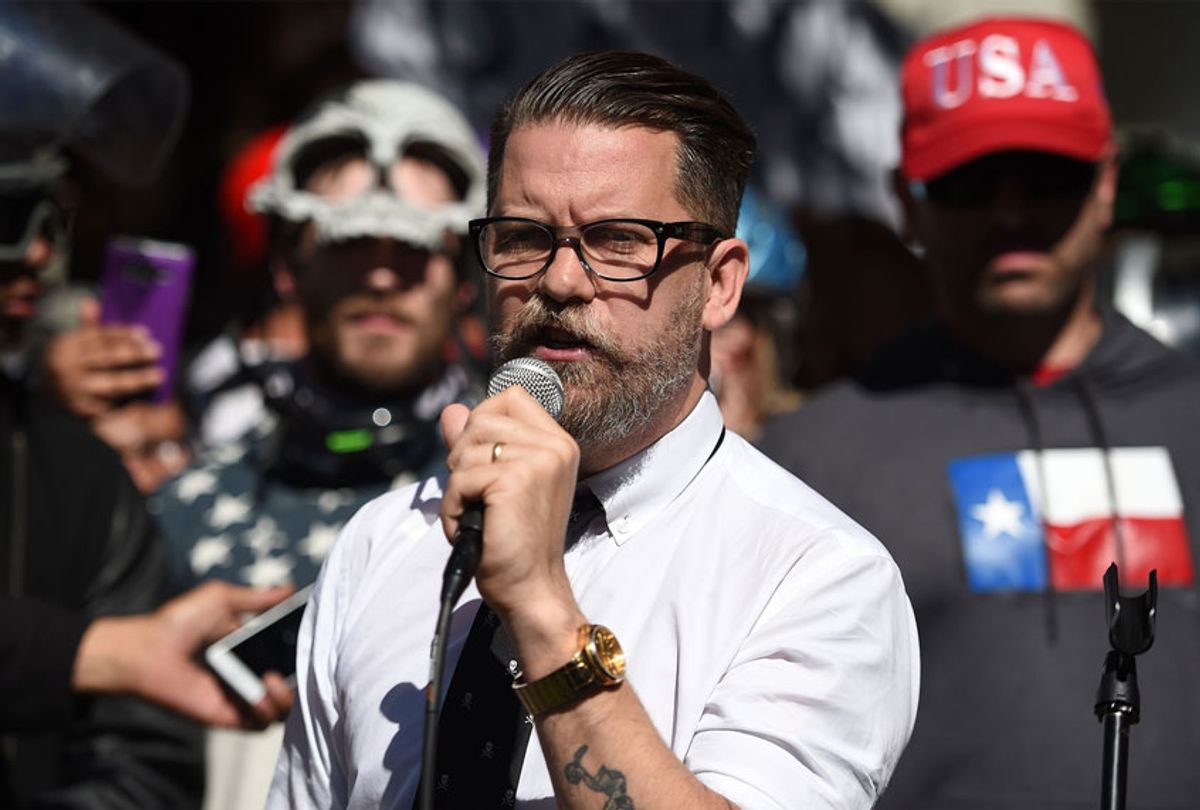 Vice Media co-founder and conservative speaker Gavin McInnes reads a speech written by Ann Coulter to a crowd during a conservative rally in Berkeley, California (JOSH EDELSON/AFP via Getty Image)
--

Gavin McInnes, the leader of the Proud Boys movement and a co-founder of Vice Magazine, has had his YouTube account suspended for violating their policies on hate speech.

"I'm kicked off YouTube y'all," McInnes wrote in a Telegram post on Monday afternoon. "350k sub[scriptions], 155 videos, 30 [million] views, 15 years. I'm told they are also going after [accounts] that feature me in any positive light."

McInnes included an image of a message that purportedly came from YouTube in which the platform said that his account had been suspended for "content glorifying or inciting violence against another person or group of people."

McInnes has already been kicked off Twitter and Facebook and appears to have been previously banned by YouTube in 2018 for copyright infringement. He recently created a video streaming platform of his own for fellow far right commentators like Jacob Wohl and Laura Loomer.

"We have strict policies that prohibit hate speech on YouTube," a YouTube spokesperson told Salon by email in a statement. "We terminate channels that repeatedly or egregiously violate our policies." According to YouTube, the company updated its hate speech policy in June 2019 to ban content such as speech that claimed one group is superior to another. This led to a fivefold increase in the number of channels and videos that the streaming platform had to remove for violating its hate speech policies, and included 107,000 videos, 2,600 channels and 43 million comments in the first quarter of 2020.

McInnes, who co-founded Vice magazine in 1994 but was forced out in 2008 after talking about white pride, launched the group Proud Boys in September 2016. One of the group's main principles, as Vox explains, is violent opposition to left-wing movements. "The right isn't violent. The left is. By allowing these sociopaths to shut down free speech with violence you are all but demanding a war," McInnes wrote.

In another screed, McInnes wrote that Proud Boy meetings "usually consist of drinking, fighting, and reading aloud from Pat Buchanan's 'Death of the West.'" McInnes argued that "the basic tenet of the group is that they are Western chauvinists who refuse to apologize for creating the modern world. Like Archie Bunker, they long for the days when girls were girls and men were men."

Emblematic of the group's tendency to mix contrived machismo with a self-pitying persecution complex, McInnes added, "this wasn't controversial even twenty years ago, but being proud of Western culture today is like being a crippled, black, lesbian communist in 1953."