"Mr. Chairman, I would ask that the sergeant-at-arms be called upon to stop the disruption of this meeting" 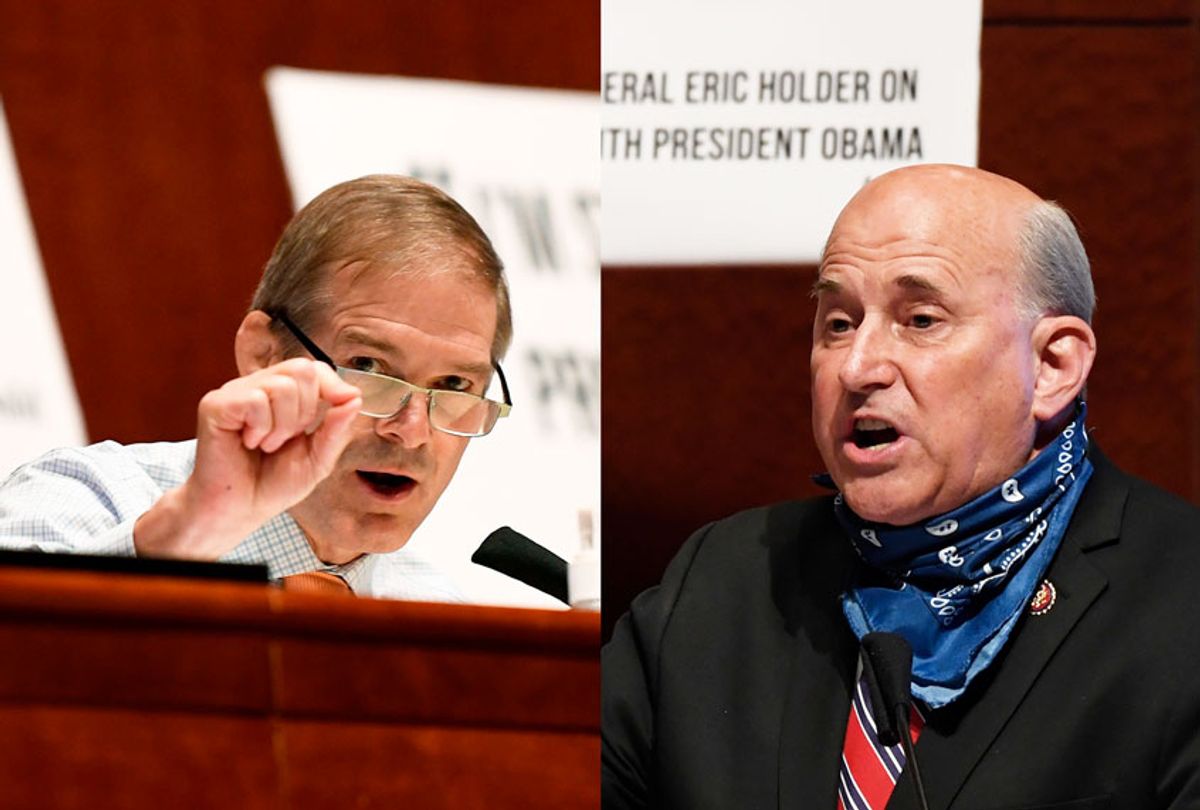 Bombshell testimony from Department of Justice whistleblowers accusing the Trump administration of abuse of power was marred Wednesday by the squabbling, theatrics and extended filibusters of retreaded grievances about the origins of the Russia probe from congressional Republicans.

The GOP officials disrupted testimony from two whistleblowers and a pair of former senior officials called to testify before the House Judiciary Committee about what they described as the Trump administration's politicization of the Justice Department. At times, the elected officials sent the hearing careening entirely off the rails.

The antics distracted from the explosive allegations dropped by former top Mueller prosecutor Aaron Zelinsky, who in prepared testimony accused senior Justice Department officials up to and including Attorney General William Barr of interfering with the rule of law in an effort to protect the President Donald Trump's personal and political interests.

"I was privileged to serve in the DOJ under two Republican and one Democratic president, and I am here because I believe that William Barr poses the greatest threat in my lifetime to our rule of law and to public trust in it," Ayer read, alleging that the attorney general had worked "to advance his own lifelong conviction that the president should hold virtually autocratic powers."

As Ayer went over his allotted five minutes, Gohmert began making a loud tapping noise, drawing the ire of Democrats who could not hear as the former senior official continued to read.

"Mr. Chairman, I would ask that the sergeant-at-arms be called upon to stop the disruption of this meeting," Rep. Hank Johnson, D-Ga, said. "I can't hear this witness. This is a very important witness."

Gohmert called Democratic objections to his tapping "outrageous" as he alleged that Chairman Jerry Nadler's attempts to quiet him were "grossly unfair." His complaints were seconded by Rep. Doug Collins, R-Ga., who argued that Nadler could not "capriciously determine the five-minute rule at the whim of what he wants" and had "not stated a recognizable way of running the committee in 18 months."

Zelinsky later testified that after his team of career prosecutors resisted politically-motivated pressure from within the department to reduce their sentencing recommendation for longtime Trump ally Roger Stone, they were told they would lose their jobs.

"Such a recommendation has never been made," he said. "We were told we could be fired if we didn't go along."

Zelinsky went on to reveal that Barr's modified sentencing recommendation for Stone included a recommendation of "zero days." The judge settled on three years.

Rep. Mike Johnson of Louisiana, also a Republican, took a personal shot at the witness, who as a new father testified via video connection at the recommendation of his family pediatrician.

"You have family concerns?" Johnson asked. "Is that right?"

Johnson interrupted his testimony, accusing the whistleblower of "phoning it in."

"Mr. Zelinsky, because you're an attorney, you know that having a witness appear and submit to cross examination in person is obviously much more effective and reliable than one who simply phones it in," he said.

"The gentleman is improper," Nadler said, gaveling in to reiterate the special rules in place amid the coronavirus pandemic. "We make no distinction between people present physically and people present by video."

Johnson returned to Zelinsky. In lieu of inquiring about Stone, he asked about Christopher Steele, the former British intelligence agent who in 2016 wrote a series of memos about the Trump's campaigns connections with Russia, later compiled into a dossier that figured into Mueller's investigation.

However, Zelinsky said the Justice Department instructed him that he was only able to speak about Stone's sentencing.

When Gohmert later attempted to pick up on Johnson's line of inquiry into Zelinsky's family concerns, he used the occasion to observe his wedding anniversary and thank his wife for not leaving him.

"Mr. Zelinsky, I was going to ask him questions," Gohmert said. "And I understand family matters. And, by the way, I'm grateful to my wife for stickin' with me 42 years today. Yeah, she's a lot more fair than we're getting around here. So — 42 years. Thank you, Kathy."

Republicans went on to invoke Carter Page, Josef Mifsud, Hillary Clinton and the Obama-era Justice Department scandal from eight year prior known as "fast and furious."

Many Democrats on the panel failed to pull new information from the witnesses, as well. Republican Rep. Jim Jordan was the first to get Zelinsky to name the supervisors he had referred to in his written statement, which experts said was one of the most important pieces of information Congress could have obtained. (The supervisor is J.P. Cooney, head of the fraud and public corruption unit in the U.S. attorney's office in Washington.)

In addition to Zelinsky and Ayer, lawmakers heard from John Elias, a current Justice Department official in the antitrust division, who testified that Barr had abused his power by ordering prosecutors to investigate cannabis company mergers based on his "personal dislike" for the industry.

"The Justice Department is not politicized because senior officials disagreed with the sentencing recommendation for Mr. Stone," Mukasey said, criticizing what he views as "a tendency these days to read ulterior motives into every action" taken by Barr.

"I have no doubt that the welfare of this country, upheld through the evenhanded application of law so as to achieve justice, is what motivates him and motivates his decisions," Mukasey said.

Barr earlier accepted an invitation from Nadler to appear before the committee July 28. The move avoids a subpoena. At least one committee Democrat on Wednesday called for Barr's removal from office.

In an aside, a frustrated Jim Jordan remarked, without apparent irony, "This is as bad as the whole impeachment."

"The anonymous whistleblower who had no first-hand knowledge was biased against the president, and it worked for Joe Biden," he continued. "It seems just as bad — just as lame."