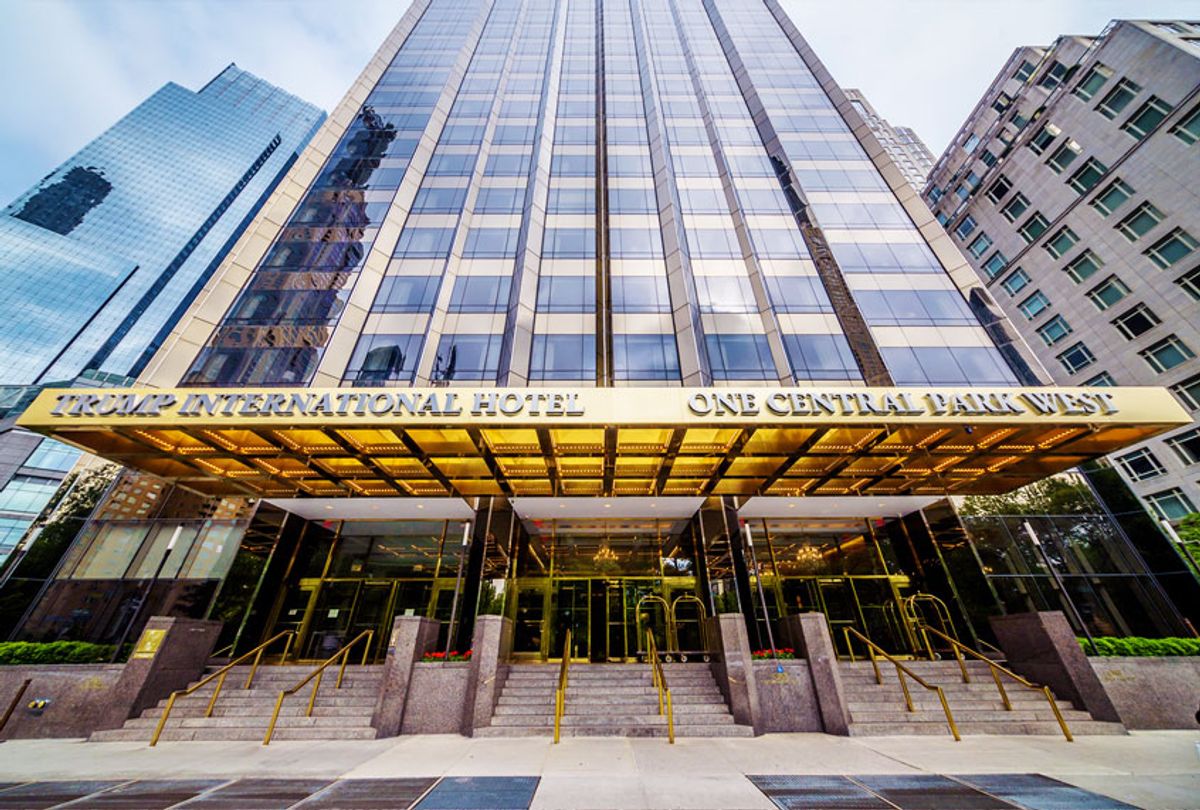 Trump International Hotel was one of three Manhattan hotels — including Hampton Inn Times Square and the Hyatt Place Times Square, owned by the family of Illinois Gov. J.B. Pritzker, a Democrat — to get caught in an undercover sting that revealed rooms had not been properly cleaned during the coronavirus pandemic, a new report reveals.

The hidden tests were conducted by long-running TV news-magazine "Inside Edition," which the Pew Research Center has labeled "pseudo news" and where President Trump's daughter-in-law Lara Trump worked as a producer from 2012 to 2016.

For the sting, an "Inside Edition correspondent would check into a room, then print the program's logo on bed sheets, pillow cases and towels using a washable spray that can only be seen under ultraviolet light.

The correspondent would also use an invisible gel to handprint other surfaces, as well as devices such as thermostats and remote controls.

He would then make it appear as if someone had slept in the room, leave, and rebook the room under another name the following night.

Trump International — which overlooks Central Park and offers guests a Personal Protective Equipment "welcome kit" — reportedly changed the bedsheets, but did not change the pillowcase and failed to wipe down the desk and remote.

A Salon reporter, after two hang-ups upon identifying himself, was able to verify with hotel management that the PPE welcome kits include a pair of masks, gloves and sanitizing materials.

When "Inside Edition" revealed the results of the sting, a hotel spokesperson accused the program of fabricating a stunt.

"Following an internal review, we have concluded that the claims made by Inside Edition are categorically false," the spokesperson said.

At the Hyatt Place Times Square, owned by the Pritzker family, the sheets and a pillowcase still showed the program's logo, and the gel was still apparent on the remote.

A Hyatt spokesperson told the program that the company was "deeply concerned about the situation described, as it is not representative of Hyatt's rigorous and enhanced cleaning protocols that have been deployed globally due to COVID-19."

Pritzker fumed at Trump for weeks for failing to secure adequate supplies to combat the coronavirus, and eventually felt forced to purchase of millions of masks and gloves from China on his own initiative and in secret. The governor said privately that he kept the project under wraps "because we've heard reports of Trump trying to take PPE in China and when it gets to the United States."

New York City has so far seen more than 212,000 cases and more than 23,000 deaths attributed to the coronavirus, according to the latest city health department data.

The U.S. has seen more than 2.6 million cases and more than 127,000 deaths, according to the latest data from Johns Hopkins University, numbers that some experts believe will spike in coming weeks thanks to slipshod public health practices as numerous states rushed to reopen under right-wing political pressure after weeks of lockdown.

Speaking to lawmakers Tuesday, the nation's top infectious disease expert, Dr. Anthony Fauci, predicted that if the country does not take significant action to get the virus under control, we can expect to see 100,000 new COVID-19 cases every day, which is more than double the current rate, and nearly five times the rate in mid-May.

The president, who refused to separate himself from his business operations and still sees income from his hotels, is also a notorious germaphobe. "The Art of Her Deal," the recent biography of Melania Trump, reveals that Donald Trump often goes to extreme lengths to avoid sleeping anywhere other than a bed at one of his properties.

For instance, Trump, when confronted with salacious and unverified reports that he witnessed sexual activity in a Moscow Ritz Carlton, reportedly told then-FBI Director James Comey that he was a germaphobe and did not stay in Moscow on the night in question. Flight records revealed that was untrue.

In April, amid the pandemic's New York City peak, Politico reported that local government officials in all seven American cities that have Trump luxury hotels, including New York, said that no Trump properties had engaged in discussions about possibly housing overflow patients or medical personnel.

More than 20 other hotels in New York offered their services to the city.

In a March 13 press statement — the day the president declared a national emergency — the Trump Organization said, "The safety of our members and guests are of our utmost importance. We are monitoring all of our businesses closely and are following the guidelines provided by the CDC."

Forbes estimated in early April that the pandemic had taken $1 billion out of the hotelier-in-chief's net worth.