Donald Trump is the 21st-century Jefferson Davis: History will judge him — and us

Trump's attempt to swaddle himself in patriotism can't conceal the truth: He wishes the Confederacy had won the war 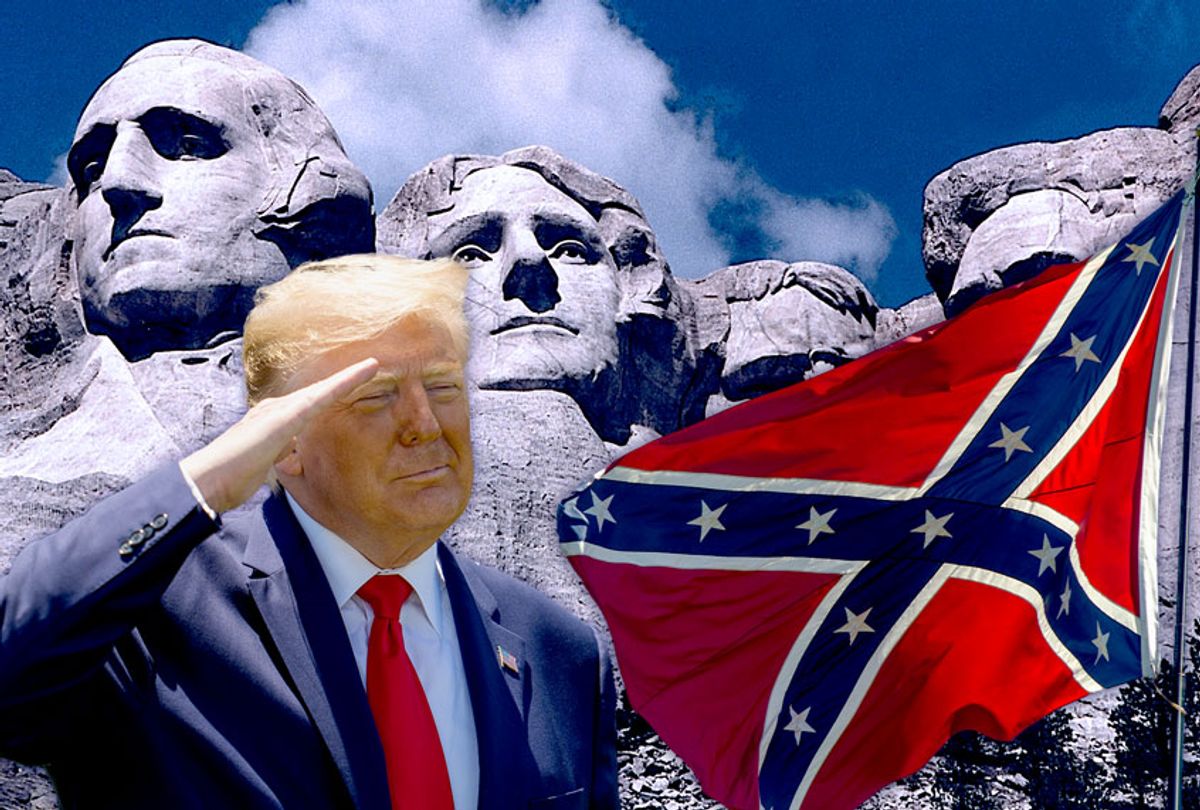 There were fireworks, a military flyover, and "patriotic" songs such as "The Star-Spangled Banner".

More than 130,000 Americans are dead from the coronavirus pandemic. The country teeters on the edge of a second Great Depression. A neofascist regime rules in Washington. Donald Trump is in thrall to Vladimir Putin and Russia and in doing so actively betrays the United States and the American people.

Music and fireworks and loud planes are distractions for a country facing an existential crisis.

Donald Trump's early July 4th celebration had little to do with uniting America in a time of trouble and pain. Instead the gathering at Mount Rushmore was just a Trump campaign rally in disguise where the Great Leader spat out his usual themes of racism, neofascism, authoritarianism, ignorance, violence, Orwellian doublespeak and lies, Christian fascism, white identity politics, and other right-wing dreck to his red hat MAGA political cult members.

Throughout his time in office, Donald Trump has made it clear through his words and deeds that he views his personal interests to be the same as the nation's.

Such thinking is like that of King George III and the other despots who the founders rejected with the Declaration of Independence, the Revolutionary War and the United States Constitution.

In the end, because he is a malignant narcissist, Donald Trump thought that all the pageantry was to honor him and not the country's birthday.

Donald Trump's re-election campaign advisers have suggested, apparently not facetiously, that they want his face added to Mount Rushmore. They are enabling his delusions of grandeur.

History sometimes has a dark sense of irony and coincidence all its own.

Because he does not read and is proudly ignorant, Donald Trump most certainly does not know that "The Star-Spangled Banner" channels his white supremacist and racist values. If Trump knew such a thing, he would likely love the song even more.

Francis Scott Key's anthem has a third verse which is rarely sung, after the ones we have all heard before sporting events and on other occasions.

And where is that band who so vauntingly swore,
That the havoc of war and the battle's confusion
A home and a Country should leave us no more?
Their blood has wash'd out their foul footstep's pollution.
No refuge could save the hireling and slave
From the terror of flight or the gloom of the grave,
And the star-spangled banner in triumph doth wave
O'er the land of the free and the home of the brave.

As many historians have documented, "hireling and slave" refers to self-manumitted Black people (that is, slaves who freed themselves) who served with the British military as Colonial Marines, fighting to liberate other enslaved Black people in America.

In the third verse of "The Star-Spangled Banner," Key is celebrating their being burned alive or drowned in Baltimore Harbor.

Trump would find much to admire about Key, who owned Black human property during the time he wrote "The Star-Spangled Banner" and was an enthusiastic defender of white-on-Black chattel slavery.

Like Donald Trump, Key was wealthy. He was also a friend and adviser to Donald Trump's favorite president, Andrew Jackson, who was not merely a white supremacist but literally a slave driver. Jackson also ordered that Native Americans be expelled from their own territory and homes to endure a death march later known as the Trail of Tears. While serving as a general prior to being president, Andrew Jackson led a military campaign against the Seminole nation and the free communities established by self-manumitted Black people in Florida.

The racism and white supremacy embedded in "The Star-Spangled Banner" provide a soundtrack for Donald Trump and today's Republican Party in other ways as well.

Donald Trump leads a movement that is waging a counterrevolution against the civil and human rights of Black and brown people in the United States and around the world.

To maintain and keep power, Trump and the Republicans have embraced the white supremacist ideology, politics and symbols of the Confederacy. This began in the 1960s with a backlash against the civil rights movement, first with 1964 Republican nominee Barry Goldwater and then with Richard Nixon's "Southern strategy," meant to appeal to white racists who rejected the civil rights movement. More than five decades later, right-wing appeals to racism and white supremacy are in some ways less restrained with the rise of Trumpism.

As part of that strategy Donald Trump and his party are defending the legacy of the Confederacy and its statues and other monuments to white supremacist terrorism.

Trump recently issued an executive order proclaiming any person who dares to "vandalize" American statues, monuments or memorials can be charged with a federal crime and imprisoned for up to 10 years.

Trump is also refusing to change the names of military bases that bear the names of treasonous Confederate military leaders. He has even threatened to veto the military's 2021 budget if such changes are made.

Here are the president's own words from his failed "comeback" rally in Tulsa:

The unhinged left-wing mob is trying to vandalize our history, desecrate our monuments, our beautiful monuments, tear down our statues, and punish, cancel and persecute anyone who does not conform their demands for absolute and total control. We're not conforming…. This cruel campaign of censorship and exclusion violates everything we hold dear as Americans. They want to demolish our heritage so they can impose a new oppressive regime in its place.

The repeated use of "our" is a signal to the fact that Trump views white America as his tribe. Nonwhites are explicitly and implicitly not welcome. In essence, Trump behaves as though he is only beholden to those white people — his MAGA cultists and "real Americans" — who vote for him.

Trump has retweeted and shared videos of his supporters yelling "white power!" and of white people brandishing weapons at Black Lives Matter and other human rights protesters. In the last few weeks Trump has also shared videos on Twitter of Black people attacking white people. Of course, he provides no context for the latter.

The goal here is twofold. First, to mobilize his voters by exciting decades-old or centuries-old white nightmares of a "race war" and possible Black "domination" over white people. Second, to encourage acts of political violence by his right-wing followers against his and their "enemies."

Writing in the Washington Post, Greg Sargent explains this:

With nearly 125,000 Americans dead and cases spiking again from a pandemic that Trump horribly mismanaged, and amid the most pronounced civil upheaval in a half century, Trump's propagandists want to convert disorder to his advantage.

That's obvious enough. But the true nature of it is often shrouded in euphemisms — Trump is "stoking division," or "throwing a match on gasoline," or some such phrase, which implies Trump is a passive bystander to societal conflicts that he's merely cheering on for cynical purposes.

It's much worse than that. Trump and his propagandists are actively trying to engineer violent civil conflict, by signaling to white Americans that they are under siege in a race war that they're losing.

The rub is that this signaling requires actually saying this in one form or another. And that forces Trump and his propagandists into a position where they must be cagey about his actual intended meanings when he does things like tweet out supporters yelling "white power."

Trump and his propagandists want a lot of white Americans to think they need to take sides in a race war.

In total, Trump and the Republican Party's dedication to causing pain and harm to nonwhite people is not collateral damage or coincidence: Such outcomes are integral to permanently maintaining society-wide white privilege and white power. This embrace of racism is so extreme that social scientists have shown that Trump supporters and other white conservatives would rather America be an authoritarian society than live in a democracy where they would have to share power with nonwhites.

The Confederacy shared such goals as well. In his infamous Cornerstone Speech in March 1861, Confederate Vice President Alexander Stephens said:

Our new government is founded upon exactly the opposite idea; its foundations are laid, its corner-stone rests, upon the great truth that the negro is not equal to the white man; that slavery subordination to the superior race is his natural and normal condition. This, our new government, is the first, in the history of the world, based upon this great physical, philosophical, and moral truth.

From the Founding to the present there is a terrible reservoir of racism and white supremacy that now provides the raw energy and fuel for Trumpism and the Republican Party in post-civil rights America.

America will need another revolution and Founding to fulfill its hopeful potential as a true "we the people" multiracial democracy. Donald Trump, his allies, and followers stand against such progress and are actively working to send America back to a time when white men's rule was (at least in their minds) uncontested, universal and eternal as the natural order of things in America and around the world.

On this Fourth of July weekend Donald Trump is grandly reminding the world that patriotism is the last refuge of traitors and scoundrels. Trump may wrap himself in the American flag and other vestments of "patriotism," but his heart and mind are truly of the antebellum South and Jim and Jane Crow America. Trump claims to be a greater president than Abraham Lincoln. Trump in his delusions believes he is as great as George Washington. But Donald Trump is really a 21st-century Jefferson Davis, president of the treasonous Confederacy. May he be remembered in the same ignominious fashion.