A group of scientists contends the novel coronavirus spreads through aerosolization. The WHO doesn't agree 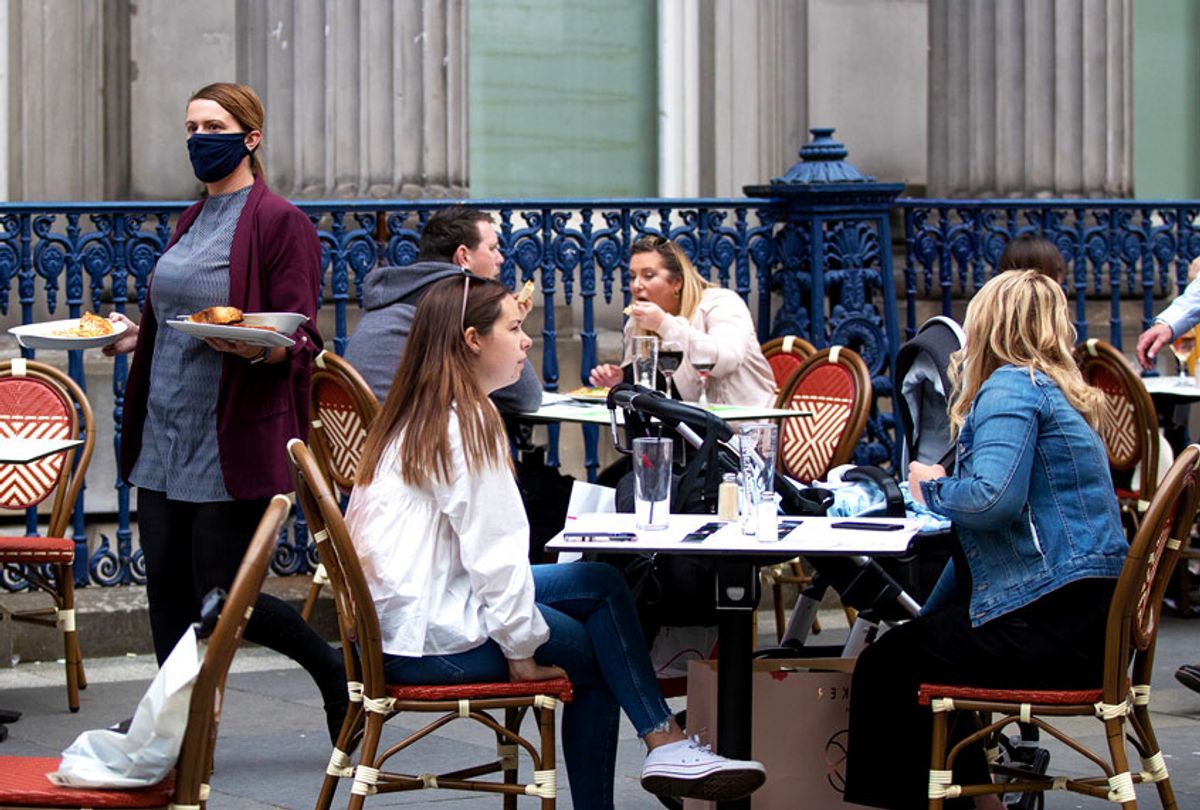 Meals are served on the street at Di Maggio's outdoor restaurant area in Glasgow city centre, as outdoor areas reopen to the public for the first time as Scotland continues with the gradual lifting of restrictions to ease out of lockdown. (Jane Barlow/PA Images via Getty Images)
--

A group of 239 scientists from 32 different countries plan on publishing a letter in a scientific journal next week contending that the coronavirus is far more predisposed to airborne transmission than previously believed. If true, it would have major implications for public safety and hospital measures designed to limit spread of the virus.

The letter will go against the conclusion of the World Health Organization (WHO) and therefore calls on the agency to revise its current position on the pandemic. The scientists' conclusion would mean that masks could be needed even outdoors and in socially distant settings; that indoor ultraviolet lights could be required to kill particles floating in tiny droplets; that health care workers may need to use N95 masks while caring for coronavirus patients; and that ventilation systems may be required to include new filters and to reduce air recirculation.

The WHO, by contrast, argues that N95 masks and proper ventilation are only of concern amid medical procedures that create aerosols, or droplets smaller than 5 microns. The agency continues to argue that the disease is mainly spread by larger respiratory droplets, which are excreted through sneezing and coughing and then fall to the floor or nearby surfaces.

The story about the scientists' letter, which was originally published by The New York Times, included interviews with nearly 20 scientists who criticized the WHO for being supposedly "out of step with science." The article chronicled other occasions when the WHO has faced criticism from the scientific community, including for being slow to support public face coverings and claiming that asymptomatic coronavirus transmission is rare.

"Some of the measures that have already been implemented — including social distancing, mask wearing, and avoiding crowded indoor spaces — are effective at slowing airborne transmission of COVID-19," Dr. Linsey Marr, who helped co-author the scientists' letter, told Salon by email. "We should add attention to good ventilation of buildings with outdoor air. We just need to pay more attention to these efforts and to give them equal weight as handwashing."

Dr. Georges Benjamin, executive director of the American Public Health Association, told Salon that he would need to read the scientists' letter to be able to directly comment on their conclusions. He added, however, that "it is well understood that aerosolization as a mode of transmission. The big unknown is how much infection does it cause, and what can other measures like managing airflow differently, UV light exposure, etc. reduce it over wearing a mask, handwashing and physical distancing."

"I prefer a measured, evidence-based approach to answering this question," Benjamin explained. "Right now we know the triad of masks, handwashing & physical distancing works to reduce risk in the face of large and fine (aerosolization) large respiratory spread. Should there be better evidence for these additional interventions from good peer-reviewed studies then we should include them on top of what we are already doing."

Previous studies have raised questions about the WHO's views on the role of lingering airborne particles in spreading the coronavirus. In a paper published for the Proceedings of the National Academy of Sciences of the United States of America by Renyi Zhang, Yixin Li, Annie L. Zhang,  Yuan Wang, and Mario J. Molina, the authors found that "the inadequate knowledge on virus transmission has inevitably hindered development of effective mitigation policies and resulted in unstoppable propagation of the COVID-19 pandemic."

In the paper, the authors purport to demonstrate that airborne transmission is "highly virulent and represents the dominant route for the transmission of this disease."

"While the WHO and the US Centers for Disease Control and Prevention (CDC) have emphasized the prevention of contact transmission, both WHO and CDC have largely ignored the importance of the airborne transmission route," they write. "The current mitigation measures, such as social distancing, quarantine, and isolation implemented in the United States, are insufficient by themselves in protecting the public."

An article in Nature made a similar point back in April, pointing out that "health officials say the virus is transported only through droplets that are coughed or sneezed out — either directly, or on objects. But some scientists say there is preliminary evidence that airborne transmission — in which the disease spreads in the much smaller particles from exhaled air, known as aerosols — is occurring, and that precautions, such as increasing ventilation indoors, should be recommended to reduce the risk of infection."