In the HBO Max series, she shows how pregnant women "have to suck it the f**k up and act like everything's fine" 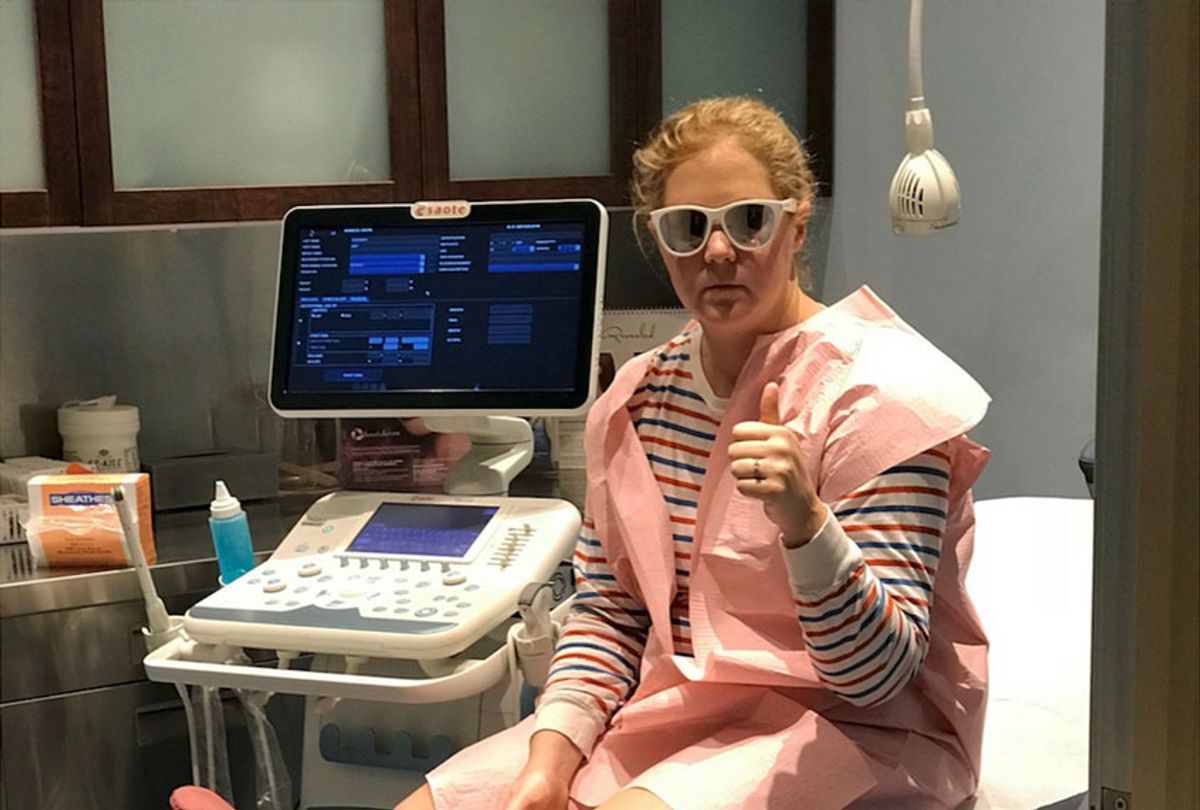 "I'm so excited!" Amy Schumer says as she announces in video recording that she's pregnant. This declaration opens the first hour of her HBO Max three-part docuseries "Expecting Amy," and it's remarkable not for the reveal but due to the palpable disconnect between the expression on her face and the words coming out of her mouth. Schumer is stone-faced, dour-looking even, and when she says the words, "I'm pregnant," she bursts out in tears. Unclear in that moment is whether these are tears of happiness or "oh my God, my life is over" weeping.

Verbalized excitement is an ongoing refrain that first hour, along with nonstop vomiting. Schumer pukes for the first time on camera, and calls it exciting as she explains that she's throwing up for a good reason.

Schumer records all of these moments that may otherwise be characterized as oversharing – outside of a context of a spew-and-all, unpretty-when-the-stage-lights-dim celebrity documentary. Make no mistake, "Expecting Amy" is completely in line with the comedian's work and image as a woman who made her bones by skewering hyper-masculine dude bros. Eventually she'd evolve into a sex-positive representative of body acceptance in the face of shaming, expressing vulnerability and frustrations in the midst of a nightmarish dating scene.

Perhaps it goes without saying that the numbers of people who are done with Amy Schumer for those reasons likely equals the percentage of the audience that adore her for speaking her mind and representing the awkward white girl contingent. Or to reference a bit from one of her classic routines, the girls who get invited to a stuck-up friend's shower and leaves with a bit about everyone in the room being so snobby that even their tampons are Burberry-branded.

If you count yourself among those who are thoroughly over Amy Schumer, "Expecting Amy Schumer" won't change your mind about her latest evolution from leather-outfit wearing feminist that dudes can run with into bluntly honest mother and wife. (Schumer married professional chef Chris Fischer in 2018.)

Even if you do enjoy her schtick, you may be tempted to make a cheap crack that, say, retitles the first hour as "Amy Schumer's Insides."

Then this sobering dark-of-night moment arrives: "It is three in the morning, and I just threw up blood."

No celebrity's unscripted, non-fictional biographical film is accidental in its presentation or devoid of specific intent. To wit: the series' director and editor Alexander Hammer also edited Beyoncé's "Homecoming," a film heralded as one of the windows into the interior life and creative drive of an intensely private woman.

Schumer, in contrast, built a successful career on her willingness to let it all hang out and to question double standards in politics and society . . . to a point. Like so many other performers at her level of fame, Schumer's stock-in-trade is a version of white feminism that's friendly and relatable and an easy sell to suburban women who miss weekend adventures in the city, bar-hopping and getting messy with the girls. No shame in that game; it made her the seventh-highest earning stand-up comedian in the Forbes' list for 2019 and the only woman to make the Top 10.

Part of that total is due to the payout she received for her 2019 Netflix stand-up special "Growing," the preparation for which is captured during the filming of "Expecting Amy" and demonstrates her resoluteness to soldier through as her pregnancy becomes increasingly arduous. Much of the docuseries' intimate content is footage from her phone and Fischer's, alongside that of producers capturing segments of her workshopped shows at New York comedy clubs and other stops on the tour. Eventually she had to cancel shows when her pregnancy difficulties escalated from worrisome to life-threatening.

Since she's Amy Schumer one may have read that detail in newspapers and magazines, in articles that mention Schumer's struggle through her trimesters but eventually go on to report on her journey into new motherhood in the standard, glowing terms. Since this is Amy Schumer's docu-diary, we get to see exactly why that is by way of scene after scene of her throwing up in cars, at bars, in her home and eventually in the hospital, where she's diagnosed with hyperemesis gravidarum.

In this respect "Expecting Amy" does a bit of service to women who want to be mothers, who are also expecting or who already endured difficult pregnancies, in that it shows the state in all of its unvarnished discomfort. "I resent the culture of how much women have to suck it the f**k up and act like everything's fine. I really resent that," she angrily says early on in her journey, long before the excruciating part sets in.

All of this also is part of Schumer's latest public construct, one that when placed alongside her Food Network series "Amy Schumer Learns to Cook," revitalizes her brand as what one might venture to describe as an accidental domestic. Between the home video share-a-thon (if one's home videos include moments of Jennifer Lawrence, Aidy Bryant and Jake Gyllenhaal making speeches at your wedding) and behind the scenes chronicling the struggle-filled nine months preceding the birth of her son Gene, Schumer's continuing exercise in practicing her version of marketable realness is completely in evidence here. You have to be a special kind of rich and famous to assume (somewhat correctly) that people will be interested in watching you vomit in an assortment of containers for an hour straight, regardless of the reason of why that is.

She's not to be penalized for this, understand. This is simply to say that "Expecting Amy" is another example of a public figure showing us an aspect of the culture's underbelly through her experience by way of performance. What revelations there are in the series are touched upon without being thoroughly examined – mainly Fischer's experience of living with a performer for whom everything is material, including heartfelt and touching offerings of love and compassion.

The second installment picks this up for a time as Schumer and Fischer expose Fischer's diagnosis with autism spectrum disorder, and the series steps away from its focus on Schumer to open the book on Fischer's background. Nominally the series is about Schumer's pregnancy, not her marriage to Fischer.

And yet, for the time that we do sit with their frictions as a couple, "Expecting Amy" feels more real than ever, dropping any sense that Schumer is turning it on for the camera and instead shows her raw vulnerability to her life partner and along with that, the unfiltered adoration she holds for him and he for her.

There's something there, in those moments, that leaves a person hungry to see more. Because that is a side we don't see in the reality-based docuseries genre, scenes from a life beyond the stage, the private jet jaunts, sitting at the kitchen counter without cue cards or a script.

Schumer points out several times that she's always able to perform, and "Expecting Amy" shows her willingness to prove that up to and past the point of collapse. Whether a person signs on to witness and appreciate this depends entirely on how they feel about Schumer, and same can be said of any public figure whose career depends on the public's whims and affections. And maybe it's useful to see that the story removed from the backstage version we're witnessing is even more interest and has the potential to allow us a raw and true look inside Amy Schumer, at long last.