“The past two days we’ve had almost 500 cases,” Tulsa Health director Bruce Dart says. “You can connect the dots” 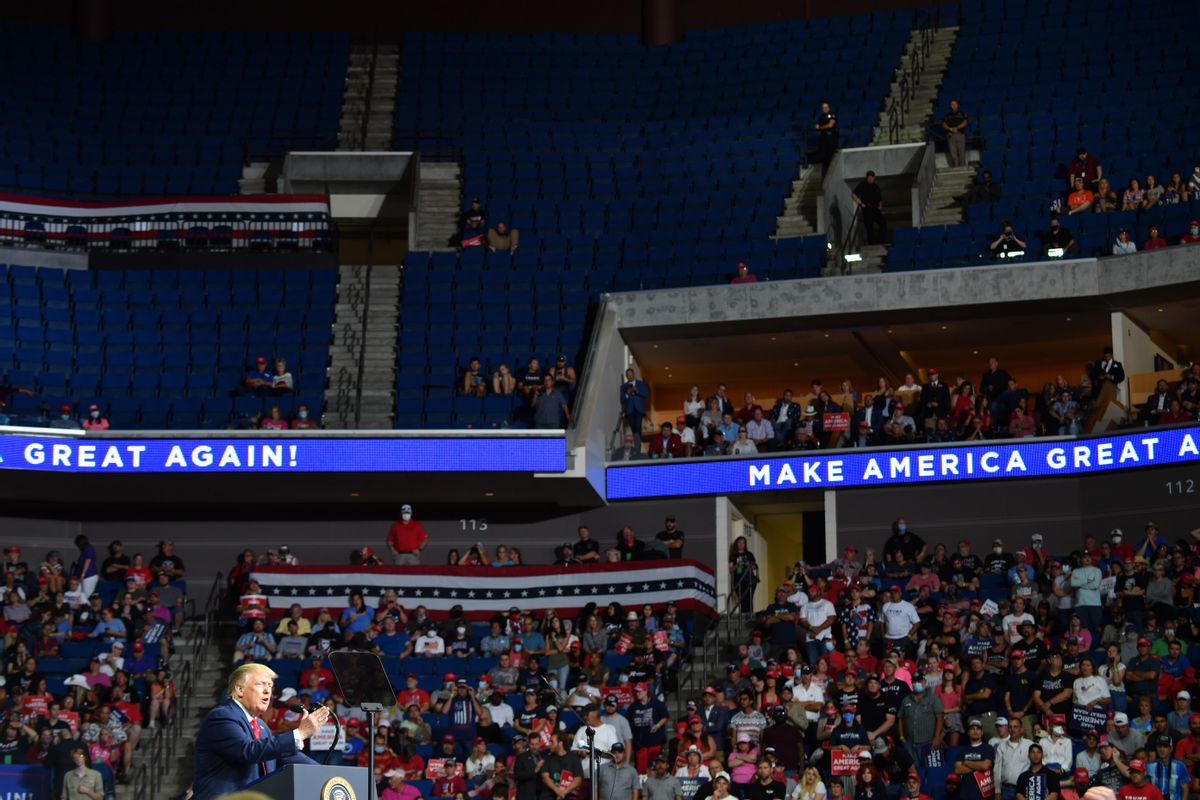 The upper section of the arena is seen partially empty as US President Donald Trump speaks during a campaign rally at the BOK Center on June 20, 2020 in Tulsa, Oklahoma. - Hundreds of supporters lined up early for Donald Trump's first political rally in months, saying the risk of contracting COVID-19 in a big, packed arena would not keep them from hearing the president's campaign message. (Photo by Nicholas Kamm/AFP via Getty Images)
--

President Donald Trump's rally "more than likely" contributed to a surge in COVID019 cases in Tulsa, according to the Oklahoma county's top health official.

Tulsa County reported a record-high 261 new confirmed cases on Monday, plus an additional 206 new confirmed infections the following day. Dr. Bruce Dart, the director of the Tulsa Health Department, connected Trump's rally to the spike at a Wednesday news conference.

"The past two days, we've had almost 500 cases, and we know we had several large events a little over two weeks ago, which is about right," the doctor said. "So I guess you can connect the dots."

Dart added that the county now has more infections than any other in the state, and "we've had some significant events in the past few weeks that more than likely contributed to that."

The White House disputed the claim. Press secretary Kayleigh McEnany argued that there was "no data to indicate" a link between the rally and the surge. She pointed out that the campaign had distributed masks to attendees, though many attendees were caught on camera without a face covering.

The county's caseload had decreased in June, but it has been trending upward since the beginning of this month. Trump's rally was held on June 20.

Pressed on whether the county identified the link through contact tracing, a spokeswoman for the health department told The New York Times that it "will not publicly identify any individual or facility at risk of exposure, or where transmission occurred." The department said earlier that contact tracers were "inundated" with cases after the rally.

Karen Keith, a county commissioner in Tulsa, told The Times that contact tracers were "struggling to persuade people to reveal where they had been, frustrating local officials." She added that the "surge in cases in rural parts of the state was most likely another indication that the rally could be responsible for the most recent outbreaks."

Dart told local news outlet Tulsa World that his team examined Google mobility data for rally attendees, which offered a "ballpark" figure for where they ended up after the event.

The doctor predicted last week that data would show the impact of Trump's rally this week because of a lag in symptom development and reporting. He had urged Trump to cancel the event before the rally.

Dart spent much of Wednesday's news conference urging residents to wear masks, which the vast majority of rally-goers did not. Trump campaign staff were also filmed removing social distancing stickers intended to prevent crowding, which had been put in place by the venue.

The Trump campaign bragged that it had received over 1 million ticket requests, but many of those turned out to be part of an online prank. Attendance was sparse.

Herman Cain, a former Republican presidential candidate and the co-chair of the "Black Voices for Trump" coalition, has been in the hospital for a week after he tested positive for the disease shortly after he was seen maskless at the rally.

Kimberly Guilfoyle, a fundraising official on Trump's campaign and the girlfriend of Donald Trump Jr., also tested positive for COVID-19 after attending the Tulsa rally.

Trump's next rally is scheduled for Saturday at Portsmouth, N.H. The event will be held outdoors and campaign staff will be required to wear masks at the rally.

New Hampshire Gov. Chris Sununu, a Republican who refused to require masks for the event, told reporters that he would greet Trump but would not attend the rally.