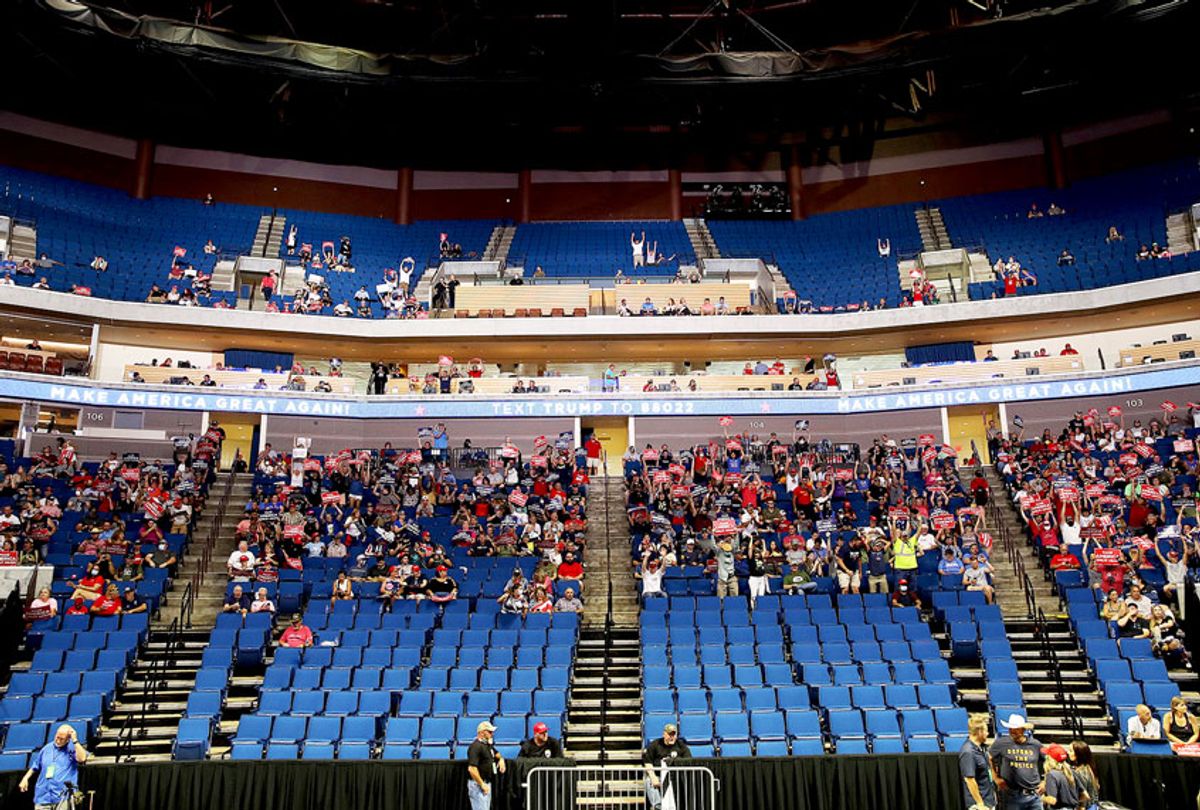 Hours before President Donald Trump arrived to address rally-goers at Tulsa's BOK Center arena on June 20, campaign staff directed the venue to remove social distancing stickers that its staff had applied to thousands of seats.

When the venue refused to comply, Trump campaign staff went through the aisles and removed the stickers, according to photos, video and venue staff cited in Billboard and The Washington Post.

ASM Global, the company which manages the BOK Center, purchased 12,000 of the "Do Not Sit Here, Please!" stickers to ensure that attendees sat apart from each other in the 19,000-seat arena, part of the company's VenueShield policy imposed to prevent the spread of the new coronavirus in its more than 325 venues worldwide.

According to ASM Executive Vice President Doug Thornton, staff had nearly finished applying the stickers to every other seat when, hours before the president arrived, a campaign worker called an ASM official and asked them to remove the stickers.

When the official declined, citing the arena's mandatory policy, "the campaign went through and removed the stickers," Thornton told Billboard, the outlet which first broke the story.

Billboard and The Washington Post both reviewed video confirming that Trump staffers peeled stickers from thousands of seat-backs.

"They also told us that they didn't want any signs posted saying we should social distance in the venue," Thornton, who oversees nearly 100 arenas on five continents and in 2005 took in thousands of Hurricane Katrina evacuees in the New Orleans Superdome, said.

Throughout the week, Trump was the subject of fierce criticism for moving forward with the indoor rally, his first since the start of the pandemic. The Tulsa City-County Health warned that the city had recorded its "highest daily increase of COVID-19 cases to date," saying in a statement that internal investigations had "identified an outbreak linked to indoor gatherings, which large groups of people congregated in close contact for prolonged periods of time."

"COVID is here in Tulsa," department director Dr. Bruce Dart cautioned the weekend before the rally. "It is transmitting very efficiently."

BOK Center workers had been commingling for several days with hundreds of Trump campaign staff inside the building, who did not follow general safety policies such as social distancing and wearing masks, according to venue workers. Officials at ASM said they never received the safety plan the campaign was asked to submit prior to the rally.

While the campaign thwarted the arena's safety policy, which had been developed with the help of doctors, event specialists and infectious disease experts, it covered its own liability, requiring all registrants to agree not to sue the campaign if they contracted COVID-19 at the rally.

"We know that eight Trump campaign staff members that were here tested positive for the coronavirus, and we know that two of them were intermingling with the people in the arena," Tulsa Police Department Cpl. David Crow said during a Tulsa Public Facilities Authority meeting Tuesday.

"Obviously, we know that that event probably triggered some type of broader infection," he added.

Following pompous campaign hype about registration numbers, the Secret Service projected more than 100,000 people would attend the event. However, the hype had been inflated by TikTok users and fans of Korean pop music, and only about 6,000 people showed up.

Oklahoma governor Kevin Stitt, a Republican, had signed off on a rally at full capacity, saying in a letter that the event was "consistent with the guidance for Oklahoma's Open Up and Recover Safely plan."

The next day, Oklahoma experienced its largest spike in cases — 222 new cases for a total of 7,848 — with about one-third of those coming from Tulsa. ASM maintains it had no authority to cancel the event, which was upheld by the state's Supreme Court.

It will not be ASM's last dealing with Trump, who recently announced he would accept the Republican nomination in Florida's VyStar Veterans Memorial Arena, which the company also manages.

"We're going to be working with the same Trump campaign staff that we worked with in Tulsa," Thornton said. "And I suspect there'll be more rallies between now and the end of the year. If we're going to do an event, we'll need to continue to have conversations with our clients and the people who own our buildings and work through any governance issues."

ASM offered Saturday to test all staff. Thus far, no arena staff have been reported as exhibiting symptoms.