“In the past two months, Trump has played golf more times than he has met with Dr. Fauci" 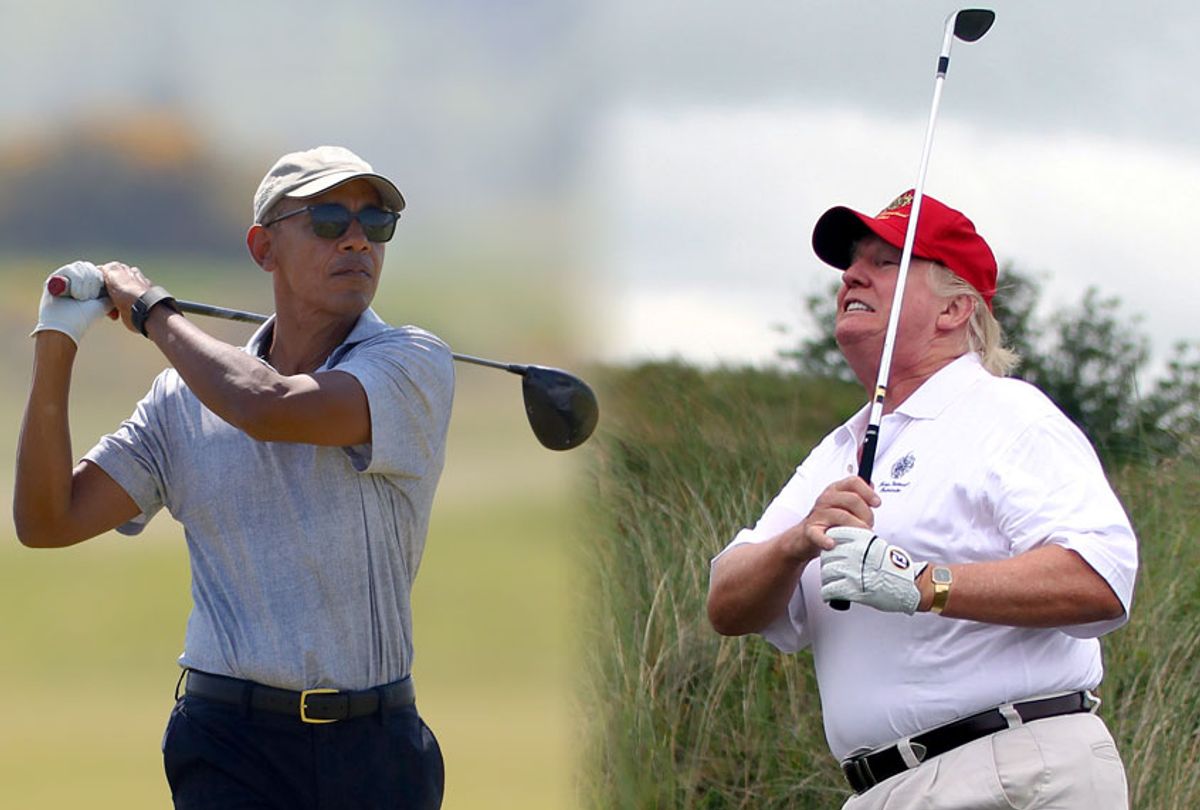 President Donald Trump falsely claimed that he golfs less frequently than former President Barack Obama did while in office as he headed for his 276th golf outing in less than four years this weekend.

Trump complained about media coverage of his frequent trips to the golf course by declaring that Obama "played more and much longer rounds." In truth, Trump has now visited a golf course 276 times as president, according to CNN. Obama played 102 rounds of golf at this point in his presidency, CBS News White House correspondent Mark Knoller reported. Obama played 113 rounds of golf through his entire first term, per Golf Digest.

"I know many in business and politics that work out endlessly, in some cases to a point of exhaustion. It is their number one passion in life, but nobody complains. My 'exercise' is playing, almost never during the week, a quick round of golf. Obama played more and much longer rounds," Trump falsely claimed Sunday on Twitter. "When I play, Fake News CNN, and others, park themselves anywhere they can to get a picture, then scream 'President Trump is playing golf.' Actually, I play VERY fast, get a lot of work done on the golf course, and also get a 'tiny' bit of exercise. Not bad!"

"Trump has played more than twice as many rounds of golf than former President Barack Obama had at the same point in his presidency," wrote CNN White House correspondent Sarah Westwood, noting that the criticism from the media was not over the fact that he plays golf but because Trump was a "frequent critic of Obama for playing golf in office."

"Can you believe that, with all of the problems and difficulties facing the US, President Obama spent the day playing golf," Trump tweeted in 2014.

"Because I'm going to be working for you, I'm not going to have time to go play golf," Trump declared during his presidential campaign.

Trump's trips have cost taxpayers untold sums of money, because the administration and Trump Organization have gone to great lengths to keep the numbers under wraps. Available data shows his company charges taxpayers more for Secret Service stays than it does for regular guests.

Critics also questioned Trump's claim about exercise after a video of him riding around a golf cart with a caddy hanging off the back went viral on social media.

"The only workout Trump gets is an occasional round of golf," Axios reported in 2017. "Even then, he mostly travels by cart. On the campaign trail, he viewed his rallies as his form of exercise."

The book "Trump Revealed" by Washington Post reporters Mike Kranisch and Marc Fisher also claimed that Trump does not believe in exercise, because he thinks it drains a body's finite resource of energy.

"Trump believed the human body was like a battery, with a finite amount of energy, which exercise only depleted. So he didn't work out," the book said. "When he learned that John O'Donnell, one of his top casino executives, was training for an Ironman triathlon, he admonished him, 'You are going to die young because of this.'"

Former White House physician Ronny Jackson said that Trump was less than "enthusiastic" about the doctor's recommendation that he exercise more after a physical in 2018. A year later, Trump's 2019 physical showed that he was medically obese.

Trump's claim that he gets work done on the golf course was also widely questioned. Last month, Trump sent the White House into a frenzy when he tweeted a video of one of his supporters yelling "white power."

Two White House officials told NBC News that the tweet set off a "five-alarm fire" among aides. Officials could not reach Trump to ask him to delete it for more than three hours, because "the president was at his golf club in Virginia and had put his phone down." Aides also tried to reach White House social media chief Dan Scavino, himself a former Trump golf caddy, but were likely unsuccessful.

"Another horrifying fact of the Trump administration's response to the pandemic," former Labor Secretary Robert Reich tweeted. "In the past two months, Trump has played golf more times than he has met with Dr. Fauci."