Using aquafaba is one way to make classic egg white-based cocktails vegan (and clean out your pantry, too) 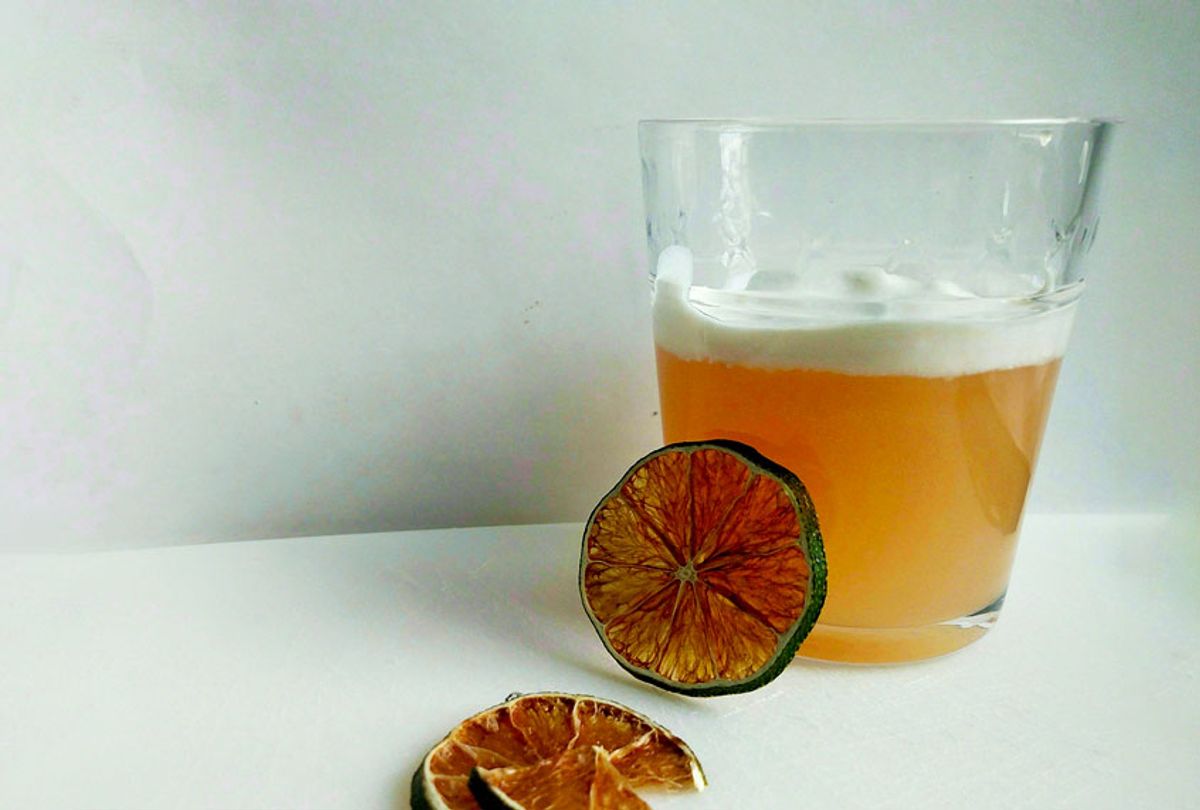 Aquafaba is a weird-sounding ingredient that can help you make delicious cocktails. It is the liquid in a can of chickpeas, or the liquid that comes from cooking dried chickpeas in water over the stove. It's starchy and viscous enough that it can be whipped — or in the case of cocktails, shaken and stirred — into gentle, fluffy peaks.

It's a standard in vegan baking and serves as a stellar substitute in cocktail classics, like the gin fizz, that call for an egg white or two. Also, who among us doesn't have an extra can of chickpeas (or ten, thanks to pandemic panic-buying) languishing in the pantry?

Nicole Stipp is the co-founder of Trouble Bar in Louisville, Ky. She says there are a few tips to make aquafaba work better for the home bartender.

"I usually tell people if you find an egg white recipe, you can substitute an ounce and a half of aquafaba," she said. "That's basically the same as an egg white in terms of volume."

She also says an easy way to elevate your aquafaba is by infusing it. She has made a lavender-infused version that ended up in a vegan pisco sour, but rosemary and citrus work well, too.

"The most successful version with the lavender uses dry lavender and we left it in the refrigerator for two days," Stipp said. "But we shook it every day to agitate the lavender and kind of make sure that the aquafaba were actually binding in a way that we would want to use."

Here's a cocktail recipe — plus a bonus bar snack — to get you started on experimenting with aquafaba (and maybe help in the pantry clean-out efforts).

The first step to making this cocktail is prepping your citrus-flavored aquafaba. You'll make more than you'll be using for this one cocktail, but it stays fresh in the fridge for three to four weeks.

Drain one 15-ounce can of chickpeas, collecting the aquafaba — there should be about ½ cup — in a small mixing bowl. Using a small paring knife or vegetable-peeler, remove the peel of your citrus of choice; I tend to go for lemon, but lime and orange are delicious, too. Give it a rough chop and add it to your aquafaba. Mix thoroughly and place in a container or jar with an airtight lid. Allow it to refrigerate for two days, shaking once each day.

Strain the peel out of the mixture and place it back in the airtight container.

Now it's cocktail time. Add the club soda to a highball glass or a coupe and set aside.

Grab your cocktail shaker and add the gin, grapefruit juice, simple syrup and 2 ounces of your citrus-flavored aquafaba. Shake well for about 15 seconds. Remove the top of the shaker, add one handful of ice, and then shake vigorously again. Strain into your glass and serve.

1 can of drained chickpeas

2 tablespoons of olive or avocado oil

Now, you may be wondering what to do with all those leftover chickpeas. I tend to go for a simple update on the basic salty and crunchy bar snack and use them to make crispy harissa-spiced chickpeas.

Harissa is an aromatic chile paste that's a widely used staple in North African cooking. There are obviously variations, but most mixtures include smoked chile peppers, garlic, cumin, caraway, and coriander. And while harissa is most commonly found as a paste in jars, many American grocery stores have started stocking a spice powder version (you can also buy it online). That's what we're looking for for this recipe.

Preheat your oven to 400 degrees and take your chickpeas and dry them on using a paper towel. Done? Now, dry them again. You want them as liquid-free as possible for the ultimate crunch.

Place them on a baking sheet and drizzle them with your oil. Bake for 20 to 25 minutes or until crispy — stirring the chickpeas halfway through. Remove the chickpeas from the oven and, once they are cool enough to handle, place them in a serving bowl and toss them with the harissa seasoning and a sea salt to taste.

Enjoy your chickpea-rich bar snack and cocktail together!