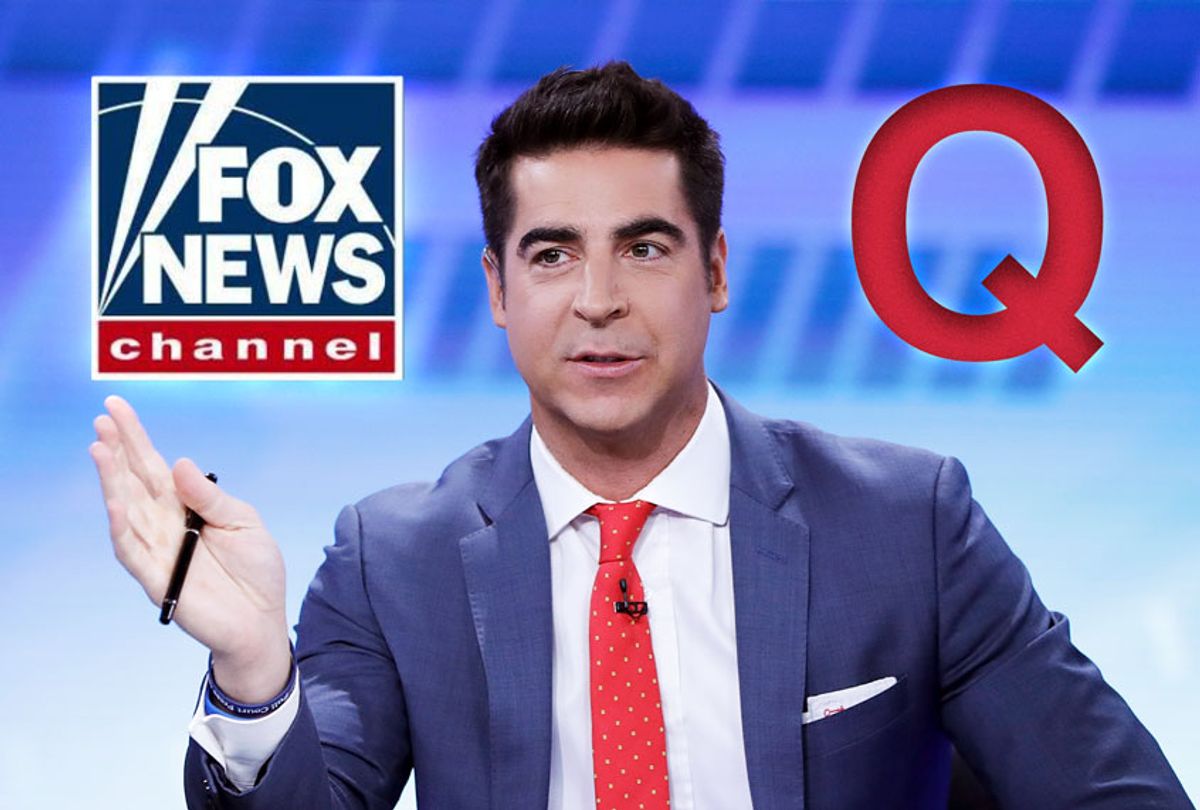 Fox News host Jesse Watters has walked back comments he made praising the bizarre QAnon conspiracy theory during a Saturday interview with Eric Trump.

Watters called QAnon a "fringe group" — which he does not "support or believe in" — in a statement to Mediaite one day after he praised it for uncovering "a lot of great stuff.".

QAnon is a conspiracy theory that started on the imageboard 4chan in which a would-be secret operative with classified information posts clues to followers about the "deep state" and a baseless plot by President Donald Trump to destroy a global sex trafficking ring allegedly involving high-profile Democrats and their celebrity supporters.

What began as a widely-mocked fringe group has now grown into a widely-mocked insurgency within the Republican Party. There are numerous QAnon supporters and boosters running in Republican races around the country. Oregon Republicans recently nominated a QAnon conspiracy theorist as their U.S. Senate candidate.

Twitter recently cracked down on a network of accounts linked to QAnon over their "potential to lead to offline harm." Facebook is preparing similar steps, according to The New York Times. QAnon adherents have pushed the Pizzagate conspiracy, a baseless claim that high-profile Democrats were running a child sex ring out of a Washington pizzeria which was followed by a shooting, and more recently, a bizarre claim that the furniture outlet Wayfair was secretly trafficking missing children in ads for high-priced storage cabinets.

Watters took issue with the ban during his Saturday interview with Eric Trump.

"Twitter has basically cracked down and eliminated about 7,000 accounts and another 100,000 accounts are now in the cross-hairs." he said. "Do you think this is an attempt to interfere in an election? Because, you know, Q can do some crazy stuff with the pizza stuff and the Wayfair stuff, but they also uncovered a lot of great stuff when it comes to Epstein and the deep state."

Many of the QAnon "deep state" claims have been debunked and, as NBC News reporter Ben Collins noted, it has not "uncovered a lot of great stuff when it comes to Epstein."

"The Epstein reporting was by actual reporters at newspapers, bastardized by Q to fit a narrative about Satanic child cannibalism," Collins wrote on Twitter. "Deeply irresponsible garbage by Fox News."

After questioning whether blocking accounts linked to the fringe group would qualify as "election interference," Watters compared the group to the anti-fascist movement Antifa.

"I never saw Q as dangerous as Antifa. But Antifa gets to run wild on the internet, what do you think is going on there?" Watters asked.

Eric Trump, who has promoted the conspiracy theory on Instagram, did not engage with the QAnon comments but agreed with Watters' assertion that cracking down on the baseless conspiracy theory was tantamount to election interference.

"They are literally putting their finger on the scales of a U.S. election," Trump argued.

"You have some little dweeb in Silicon Valley, who's 22 years old. He's a tech savant," he said. "He's running Twitter or one of these companies, and he literally has his finger on the power of a presidential election."

Journalists condemned Watters and Fox for praising the group on the air.

"I can't begin to tell you how validating this segment will be for QAnon followers and how dangerous that is," journalist Yashar Ali wrote. "QAnon followers are deeply detached from reality and they constantly look for validation of their beliefs. They look for what they see as codes from people they support. A top Fox News host endorsing QAnon while the president's son nods along is all they need."

Watters later issued a statement walking the comments back.

"While discussing the double standard of big tech censorship," he said Sunday, "I mentioned the conspiracy group QAnon, which I don't support or believe in. My comments should not be mistaken for giving credence to this fringe platform."