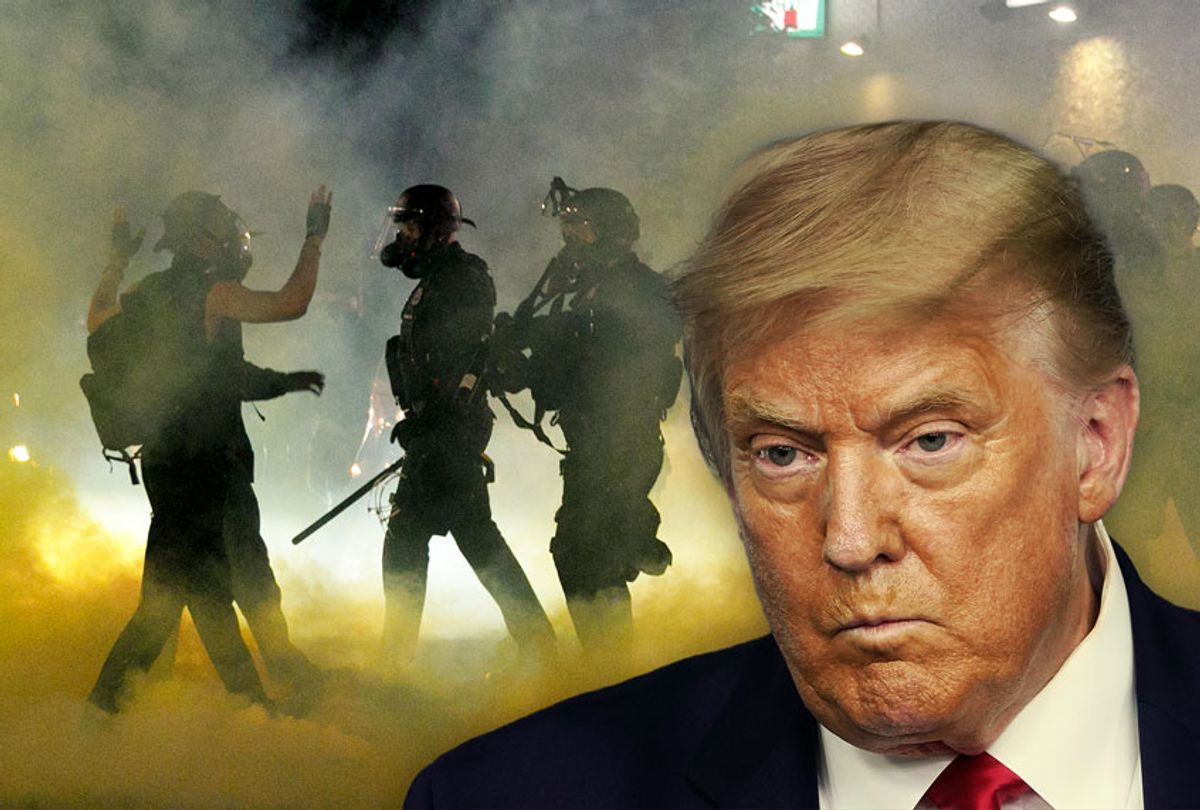 For the past week or more, many folks in media and politics, including those of us at Salon, have been accusing Donald Trump of sending federal police into Portland, Oregon — and now a bit further north in Seattle — almost entirely to stoke violence that he thinks will help him win re-election. Not that such speculation was a big reach, of course. It was plainly obvious that politics, not any real concern about "law and order," was driving Trump's decision.

For one thing, while protests against police brutality have been ongoing in those cities since the killing of George Floyd in Minneapolis in May, they were largely winding down — until Trump's goons showed up and started snatching people without cause, beating protesters and tear-gassing peaceful crowds. For another thing, local and state politicians in Oregon have pleaded with Trump and his minions — especially acting Homeland Security Secretary Chad Wolf — to pull out the federal police, who are geared up to look like an invading army. Oregon's attorney general has filed suit against the federal government over this abuse of power, although a federal judge denied her request for a restraining order. Third, if Trump actually gave a crap about protecting Americans, he would be focused on fighting the coronavirus, not a bunch of young people setting off fireworks and spray-painting buildings.

But now White House aides have come right out and admitted that the reason Trump is waging war on American cities and terrorizing peaceful protesters is because he thinks it will look awesome in his campaign ads.

In an article published Friday, the Washington Post reported that "Trump's campaign officials say that the president wants to amplify his law-and-order message" and that Portland was chosen not because of any real threat to anyone's safety in the city, but because Trump and his aides felt it was the best "theater for his fight."

Trump has shown far more interest in this campaign stunt — one that involves tear-gassing, beating and terrorizing real people for the purposes of campaign advertising — than he ever has in the fight against the coronavirus. Trump gets up early in the morning, the Post reported, eager to call Wolf "for real-time updates from the front."

Trump's behavior isn't just gross and sadistic. It is also an abuse of power and a misuse of taxpayer funds, which are being deployed openly for the purpose of creating campaign materials. The fact that he's using the bodies of innocent people as props in his brutal campaign theater just makes the entire situation worse.

Under the circumstances, as wearying as it is to say this, the Democrats need to impeach Trump. Yes, again.

Over the weekend, the editorial page editor at the Washington Post, Fred Hiatt, published an op-ed detailing the many impeachable offenses Trump has committed since he was formally impeached by the House of Representatives last December. (He was acquitted in the Senate, despite being obviously guilty of abuse of power and obstruction of Congress, because 52 of the 53 Republicans in the chamber — the exception being Sen. Mitt Romney of Utah — refused to convict him.)

Trump's "abuse of law-enforcement powers" with "the recent, reckless deployment of federal forces into U.S. cities for political purposes" is an impeachable offense, Hiatt argues. He points out that this offense dwarfs even the abuse of law enforcement powers of previous weeks, such as Trump's dismissal of Justice Department officials for investigating his abundant corruption and abusing his presidential powers to let his criminal cronies off the hook.

Hiatt says he's "not suggesting that the House should again impeach the president" so close to the election, when it should be left up to "the voters to render judgment."

That sounds reasonable at first, but Hiatt overlooks a crucial factor: Trump's abuse of law enforcement powers is putting the well-being and even the lives of Americans in peril, while also illegally trying to stomp out their First Amendment rights. Unless someone stops him, Trump will continue to escalate these tactics — and there's a real chance people could be killed by these federal goons. (Trump's provocations have already led to one inadvertent death, when a motorist shot a protester in Austin, Texas.) Impeachment may be the only way for Congress to stop Trump's unjustified violence against the citizens he was supposedly elected to serve.

Back in December, Trump was caught red-handed in the act of trying to cheat in the 2020 elections by using his office's powers to blackmail the president of Ukraine to aid a smear campaign against Trump's Democratic opponent, former Vice President Joe Biden. These attacks on Portland and Seattle are the same thing: Trump is abusing his powers in order to create a false campaign narrative about "violent anarchists" that he hopes can be used to distract from his immense failings as president.

The punditocracy may view the impeachment of Trump in 2019 as a failure, since the Senate, run by corrupt Republicans, failed to convict him.

In truth, the impeachment served at least one important purpose: It stopped Trump's illegal scheme to blackmail Volodymyr Zelensky, the Ukrainian president, in its tracks.

Remember, Zelensky was about to give in to Trump's threats and promise a phony Biden "investigation" in exchange for the military aid Congress had already authorized, but Trump was withholding. An CNN interview was scheduled for September, in which Zelensky likely intended to do Trump's bidding and smear Biden. But when House Speaker Nancy Pelosi announced an official impeachment inquiry, drawing attention to Trump's criminal behavior, Zelensky's interview was canceled.

While it's not certain that Trump would pull back his federal police in the face of another impeachment inquiry, previous experience shows that he can be compelled to scale down his corrupt schemes in the face of exposure on the level that an impeachment inquiry brings. Considering that people's health and lives are on the line, it's worth making the effort. Congress has a duty to protect Americans from a violent president who is waging war on them for political gain.

It's tempting to debate the politics of this, of course. One side would argue that holding impeachment hearings highlighting Trump's abuse of power — which could feature witnesses such as the local politicians and victims of federal police tactics — will help focus the public's attentions on Trump's corruption. The other side would argue that it's a distraction from the ongoing issues of the pandemic and collapsing economy, and could backfire if the public decides the impeachment itself is political. Pelosi, no doubt, would not be keen to spend time on another impeachment process as Democrats in Congress are trying to rescue the country from economic catastrophe, in the face of Republican intransigence.

But what was true last December is still true now: Ultimately, there's no way to know for certain how impeachment hearings would play out politically.

What is known, however, is the morality of this situation. What Trump is doing is illegal and immoral. It's incumbent on those who actually care about the safety of Americans to do whatever they can to stop his cynical campaign of violence against citizens who are exercising their free speech rights. Oregon is already fighting this in the courts. Congress needs to back state officials up by invoking the only power that has so far worked to curtail Trump's abuses: Impeachment.