A new report reveals that Buddy the German shepherd, the first American dog to be diagnosed with COVID-19, has died 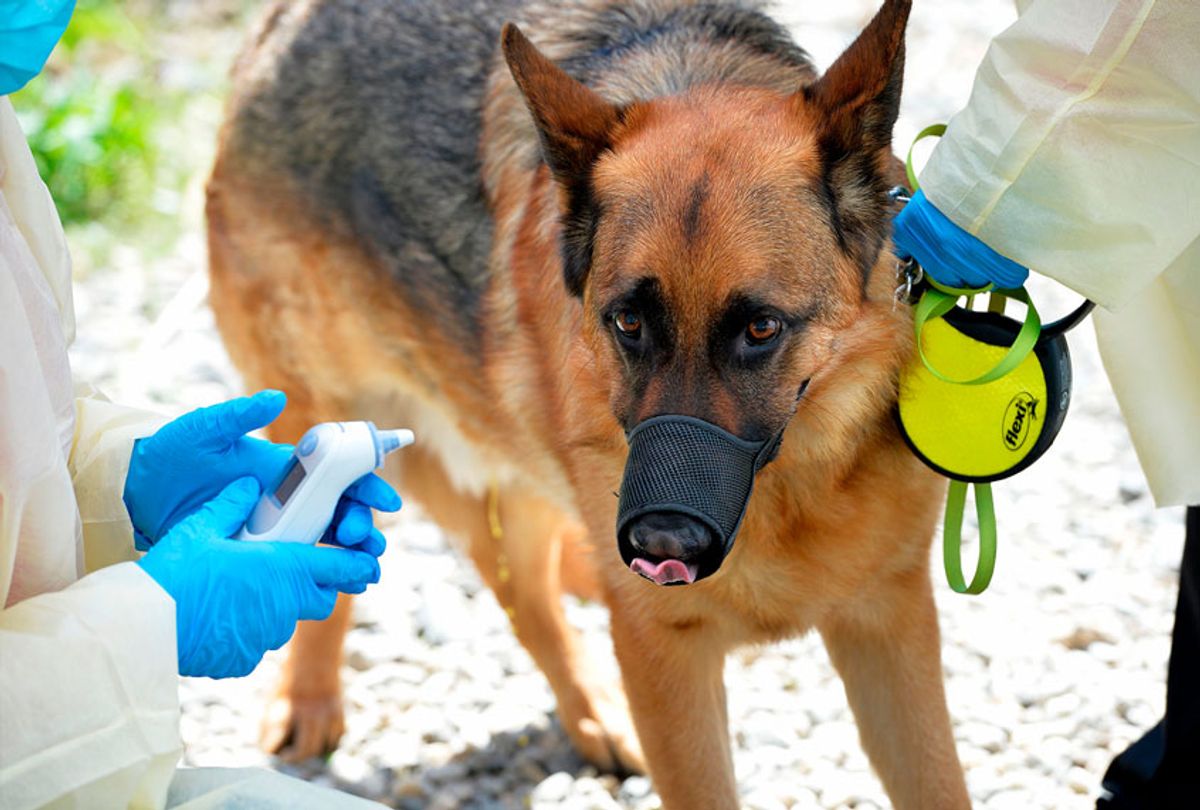 The veterinarian performs a check up on a German Shepard, during a drive through veterinarian clinic at the Salem Animal Rescue League in Salem, New Hampshire on May 27, 2020 (JOSEPH PREZIOSO/AFP via Getty Images)
--

Buddy the German shepherd, the first dog in the U.S. to test positive for COVID-19, died earlier this month.

Buddy initially displayed symptoms of COVID-19 in April. He struggled to breathe, became lethargic and lost weight, according to an exclusive report from National Geographic.

Though he was tested for COVID-19 on May 15, his family did not receive a confirmation that he had the disease until they were notified by the New York City Department of Health on June 2.

Buddy began vomiting clotted blood one month later, and doctors discovered that the beloved canine also had lymphoma. Buddy's family decided that the humane course of action would be to put him to sleep. (Doctors are unclear about the nature of the respective roles played by COVID-19 and lymphoma in the dog's passing.)

"My pet was like my son," Buddy's owner, Allison Mahoney, told National Geographic. "When he was passing away in front of me, he had blood all over his paws. I cleaned him up before we drove to the vet and stayed with him in the back seat. I said, 'I will have your voice heard, for all our furry friends. Your voice will be heard, Buddy.'"

As of this writing, the U.S. Department of Agriculture has diagnosed more than two dozen animals with the novel coronavirus. There is no evidence thus far that pets can easily contract the novel coronavirus. At the same time, there are still concerns that human beings could infect animals. Thus, individuals with a COVID-19 diagnosis are advised to avoid physical contact with their pets and other animals.

"We are still learning about SARS-CoV-2 in animals, but there is currently no evidence that animals play a significant role in spreading the virus," the USDA said in a press release when discussing the first COVID-19 diagnosis in an American pet dog. "Based on the limited information available, the risk of animals spreading the virus to people is considered to be low. There is no justification in taking measures against companion animals that may compromise their welfare."

Studies suggest that both dogs and cats are susceptible to COVID-19, though felines appear to be more so. At the same time, health experts urge pet owners to avoid abandoning their animal companions simply because they are afraid of getting sick.

"The danger we are facing is that people get nervous when they hear that companion animals could be virus carriers and decide to get rid of them," Jürgen Richt, a veterinary virologist at Kansas State University in Manhattan, told Nature in May.

The first known novel coronavirus infection for an animal in the U.S. was Nadia, a four-year-old Malayan tiger who resides at the Bronx Zoo. Nadia was tested for the novel coronavirus after she began displaying troubling symptoms, including a dry cough and a loss of appetite.

The Centers for Disease Control and Prevention has reported COVID-19 cases in lions and minks. It has also found that common marmosets, cynomolgus macaques, ferrets, grivets, golden Syrian hamsters and Rhesus macaques can become infected.

The agency also notes that the novel coronavirus appears to have originated in bats.

"Some coronaviruses that infect animals can be spread to humans and then spread between people, but this is rare," it writes. "This is what happened with the virus that caused the current outbreak of COVID-19, with the virus likely originating in bats. The first reported infections were linked to a live animal market, but the virus is now spreading from person to person."

It adds, "The virus that causes COVID-19 spreads mainly from person to person through respiratory droplets from coughing, sneezing and talking. Recent studies show that people who are infected but do not have symptoms likely also play a role in the spread of COVID-19."