"The United States should be reimbursed or should be paid a substantial amount of money," Trump says of the talks 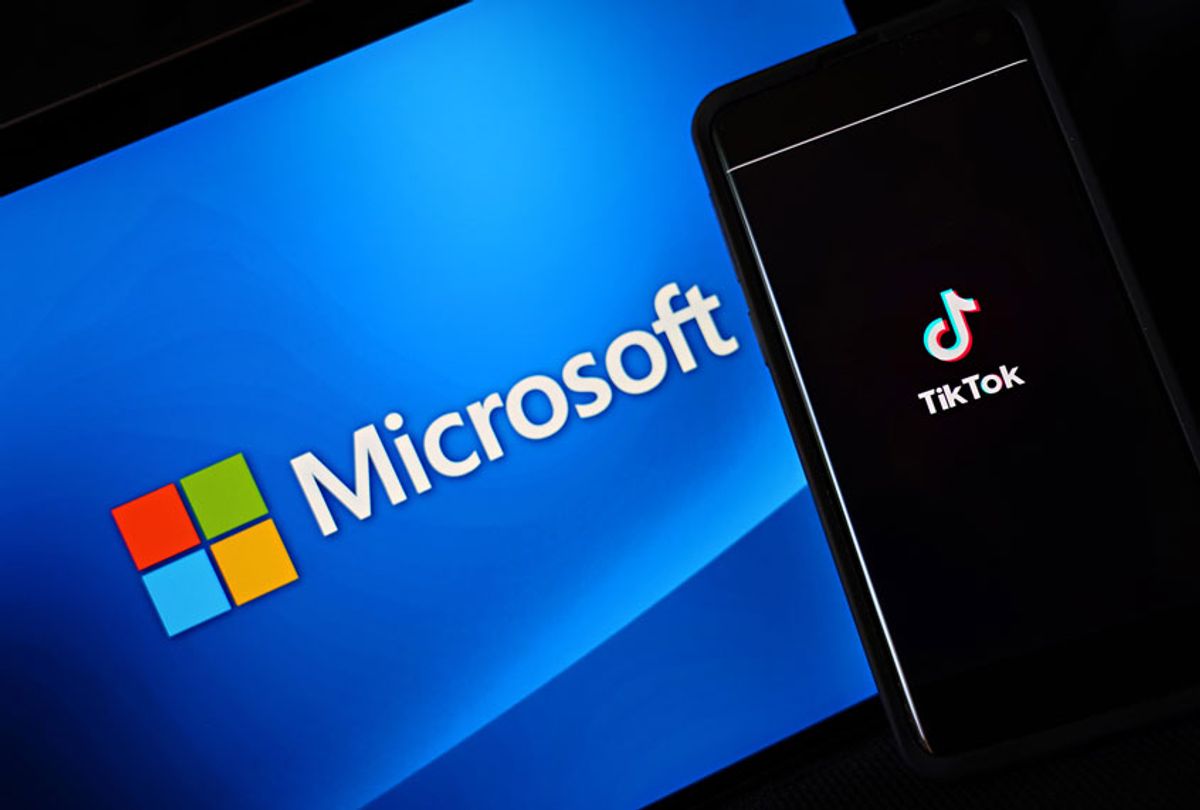 A mobile phone featuring the TikTok app is displayed next to the Microsoft logo on August 03, 2020 in New York City. Under threat of a U.S. ban on the popular social media app, it has been reported that Microsoft is considering taking over from Chinese firm ByteDance. (Illustration by Cindy Ord/Getty Images)
--

The American technology company Microsoft confirmed Sunday that it is in discussions to purchase the Chinese social media app TikTok. The news came days after President Donald Trump threatened to ban the popular video-sharing company from operating in the U.S.

Microsoft said its CEO Satya Nadella met with Trump to discuss exploring the purchase of TikTok from its parent company, ByteDance, in a blog post announcing the discussions.

Trump later acknowledged that Microsoft was mulling the purchase, telling reporters Monday that "they don't have any rights unless we give it to them."

"It's a little bit like the landlord/tenant; without a lease the tenant has nothing, so they pay what's called 'key money,' or they pay something," the president added. "But the United States should be reimbursed or should be paid a substantial amount of money, because without the United States they don't have anything."

If successful, the acquisition would give Microsoft control over TikTok not only in the U.S. but also in Australia, Canada and New Zealand. The potential agreement includes a promise that "all private data of TikTok's American users is transferred to and remains in the United States."

Microsoft wrote in its blog post, which was released before Trump's remarks to reporters, that it "appreciates" his "personal involvement" while he ostensibly attempts to "develop strong security protections for the country." The post also noted that Trump had established a deadline of Sept.15 for the potential acquisition, giving the company less than seven weeks to hammer out a deal.

"Microsoft fully appreciates the importance of addressing the President's concerns," the company wrote. "It is committed to acquiring TikTok subject to a complete security review and providing proper economic benefits to the United States, including the United States Treasury."

Trump's threat last week to ban TikTok did not come as a surprise. Earlier in July, Secretary of State Mike Pompeo told Fox News host Laura Ingraham that "with respect to Chinese apps on people's cell phones, I can assure you the United States will get this one right, too."

He later added that people who download the app should only do so "if you want your private information in the hands of the Chinese Communist Party."

Salon reached out to Kurt Opsahl, the deputy executive director and general counsel of the Electronic Frontier Foundation, about the legal implications of a potential ban of TikTok.

"Banning Americans from using the TikTok app would infringe the First Amendment rights of those users as an overly broad restriction on a means of expression (and on reaching the TikTok audience) unnecessary to achieve the government's national security purpose," Opsahl said by email.

Prohibiting the app in stores would violate the First Amendment right to distribute software, Opsahl added, since courts have argued that software is a form of speech. He pointed out that "if the Trump administration's motives were based on anti-Trump content, this is obviously not a legitimate government purpose. Courts would not balance the ban against that purpose. If censoring political speech was shown to be the true purpose, courts would subject the ban to closer constitutional scrutiny, which the ban would not survive."

Speaking to Salon at the time of Pompeo's comments, Leonard M. Niehoff, a professor from practice at the University of Michigan Law School who specializes in the First Amendment, explained that there were constitutional concerns about a potential ban amid Trump's pattern of retaliation against social media companies.

"One of the primary concerns is that this is part of a pattern of retaliation against social media platforms that the president does not like, either because of how the platform has treated his speech or because of how users have deployed the platform against him," Niehoff told Salon. "A central tenet of the First Amendment is that the government cannot retaliate against speech or speakers based on content or viewpoint. That was, in my view, quite clearly the motive behind the executive order that came out after Trump's dispute with Twitter. The question is whether the targeting of TikTok is in the same category."

Niehoff's observations referenced a successful effort in June by TikTok users to embarrass Trump during a rally in Tulsa, Okla. After a 51-year-old grandmother from Fort Dodge, Iowa, named Mary Jo Laupp suggested in a TikTok video that people reserve tickets to Trump's rally but not attend, hundreds of thousands followed suit. The prank appeared to fool Trump campaign manager Brad Parscale, who tweeted days in advance that they had "just passed 800,000 tickets. Biggest data haul and rally signup of all time by 10x. Saturday is going to be amazing!"

Laupp later told The New York Times that she was "overwhelmed" and "stunned" by her video's success, adding that "there are teenagers in this country who participated in this little no-show protest, who believe that they can have an impact in their country in the political system even though they're not old enough to vote right now."

The rally ultimately had only 6,200 attendees out of a seating capacity of 19,000. Salon reached out to Microsoft about whether political activity was mentioned during their discussions with Trump. The company declined to answer.