Are late night TV hosts showing us what returning to the new normal looks like?

As Jimmy Fallon, Stephen Colbert & more return to the studio, we hope some, like Seth Meyers, stay at home with us 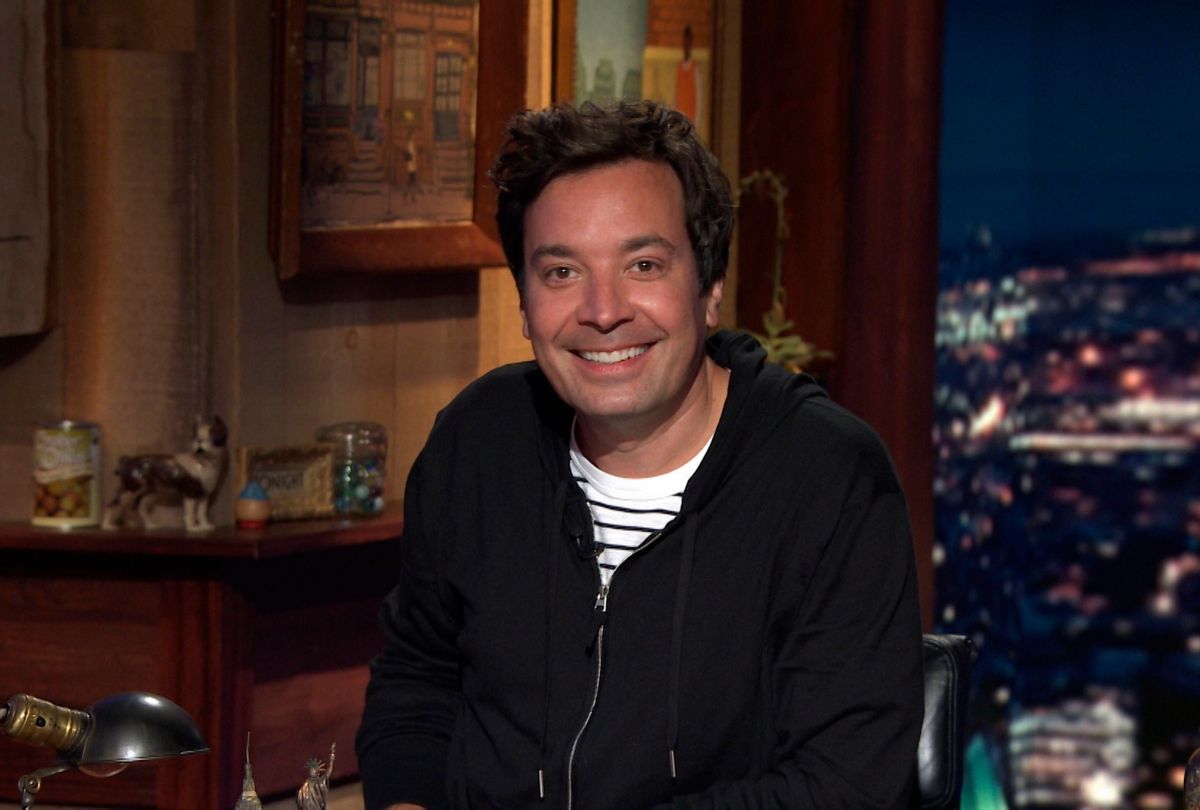 Too quickly and most unassuredly, corners of the country are pushing to get back to business despite the danger posed by this pandemic. Schools are opening up in states across the country, as are restaurants, bars and stores. Infection rates are spiking too, although the president and substantial sections of the population don't seem to be bothered by that.

Meanwhile "The Tonight Show Starring Jimmy Fallon" has been back in its office – er, studio – for a month now. Its host and The Roots banter as usual, and Fallon has traded in his traditional suit and tie from the olden days for a designer version of working casual, sweaters and the odd blazer over long-sleeved cotton shirts. The only ingredient missing is the live studio audience.

Then again, Fallon has been running NBC's banner late night program with no one to bounce jokes off of beyond his wife and kids for five months now.

Chuckles from the band and the crew give each episode the feel of some clandestine party, with host and band members situated in a way that maintains social distancing. Gone is the tall curtain, the wide stage and the signature desk. In its place is the illusion of hanging out with the host in his suave city condo with a view, his musician buddies situated nearby and famous guests beaming in from elsewhere.

Until this week, only "The Tonight Show" and TBS' "Conan" had emerged from their quarantine pads to resume production in a studio setting.

Conan O'Brien opted to resume production from a new home base of West Hollywood's famed comedy club Largo, one of many theaters closed during the pandemic. O'Brien built his hosting schtick on channeling absurdity into a vibe, and so it goes with him playing to a room packed to the doors with open seats.

Each in their own way provide examples for other series of how to get back to the business of live production without abandoning viewers in a time of upheaval and uncertainty. NBC "Late Night" host Seth Meyers told reporters as much last week when someone inquired about when and whether his show would get back to its normal workplace.

"Yeah, we've been really lucky that Jimmy and 'The Tonight Show' have been back in 30 Rock, forging a path, making a sort of road map for the rest of us," Meyers said, "and so we're definitely aiming on sooner rather than later."

How much sooner? Possibly after the show's upcoming two-week hiatus.

Fall's arrival looms, and our glimpse of it brings the question of what the new season of television will look like. Each of these late night TV series in their own way have acted as the industry's vanguard, demonstrating what's possible.

And although it's still very early days, each host has operated in quarantine mode for long enough to know what's working and what the audience needs. But is it strange to also hope that a few of these late-night programs stay at home? A lot of us are still stuck in place, after all.

We get that working from home takes on an entirely different meaning when your job requires cameras, sound equipment, producers, operators and assistants. Even though these teams have been pared down – in Fallon's case, it was pretty much just his wife filming him for a while – it's the sort of life interruption that may seem alien to people whose main complaint about working from home is the loneliness.

Understandably, this week both CBS late night programs, "The Late Show with Stephen Colbert" and "The Late Late Show with James Corden," resumed productions from some version of their studios away from home. (ABC's "Jimmy Kimmel Live!" has been helmed by an assortment of guest hosts while Kimmel's been on vacation.)

Corden's "Late Late" set in L.A.'s Television City now has a bar and invites the house band, led by Reggie Watts, to inject additional notes of loopiness into the silence that would ordinarily be filled by the audience's laughter. He also has a box of buttons he can press to play pre-recorded roars, applause and simulated oohs and aahs, which at least initially, he abused with glee.

Colbert's crew constructed a version of his studio office, wood paneling and all, a few floors below his actual digs in New York's Ed Sullivan theater. In his production from home, he resembled someone's knowledgeable patriarch, albeit one whose punchlines are a few cuts above the typical dad jokes.

In his workspace replica he assumed the air of a counselor or public servant . . . which, if not for his multimillion-dollar annual income, accurately describes his job at the moment.

The subtle stylistic changes each of these shows has embraced are their own prescription for our quarantine blues, offering another layer of escapism that their at-home versions could not -- which is the illusion of visiting someplace else.

This is not to say people haven't been leaving their houses. They have and it's been a problem. But in terms of "Tonight," "Conan" and "The Late Late Show" in particular, they're offering the vicarious simulation of going out for a nightcap or enjoying a low-key hang at a friend's place. Adding to the retro feel are the musical guest performances on "The Tonight Show," some submitted via video and produced in a way that reminiscent of the type of bright pop videos that used to debut on talk shows in  the 1960s and '70s.

Notice that none of these shows has returned to the exact same sets they had prior to the COVID-19 lockdown – and who knows, they might not. (This also is something "Saturday Night Live" has to consider; its set has a lot of moving parts and behind-the-scenes crew coordination. According to Variety, Lorne Michaels and NBC are planning to return to the show's midtown studio for the 46th season and the run-up to the presidential election in November. A premiere date has yet to be announced.)

Even if they do, it's going to be a very long time until we fall asleep to the sounds of a live audience laughing and applause that isn't canned and forced out with the press of a button – echoed from past that feels impossible to recapture even though it is only months gone. 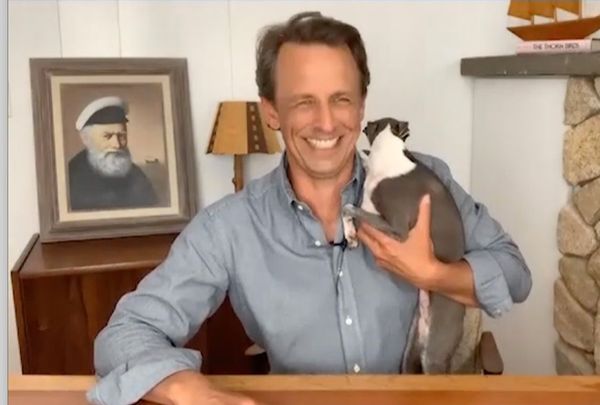 Others, though, are excelling in their "at-home" versions by fulfilling what I'll characterize as a need for psychological solidarity. "Late Night with Seth Meyers" has always been a favorite of mine, but as the production's quarantine has gone on, Meyers has gotten more playful and a little stranger. Recent episodes found a star feature in a strange old portrait of a sea captain that probably came from a garage sale somewhere.

People either love or hate it, but with his grizzled voice he has become Meyers' effective co-host and hype man . . . and regardless of your review, the sight of a weird old sea captain coming to life and spouting strange jokes is a great metaphor for the sanity slide resulting from our cabin fever.

At present, "The Daily Show with Trevor Noah" is operating as "The Daily Social Distancing Show" and should be considered the gold standard for all at-home late night comedy shows. With a tip of the hat to Samantha Bee, whose "Full Frontal" episodes come to us from the wooded space in her back yard, and John Oliver, whose main tweak to the "Last Week Tonight" set was to switch out his old desk for a glass one while continuing to broadcast from a smaller studio space he joking describes as a void, Noah appears to be living like a lot of us. His hairdo's a bit shaggier, his shaves are intermittent, and his signature look is a slouchy hoodie.

Importantly, although his monologues pop with humor and the correspondents are still quite funny, he's doesn't shy away from expressing outrage at systemic injustice or pointing out the obscenity of the administration's cavalier attitude toward the pandemic.

According to Comedy Central, "The Daily Social Distancing Show" will continue to be broadcast to the world from Noah's apartment, and those of the series' correspondents, for the foreseeable future.

While I don't know how Noah feels about that, to me that knowledge is a relief. It means that the late-night audience has an array of options to cater to how we're feeling at any given moment, whether we're climbing the walls or simply want someone to sit on the couch with us and commiserate.