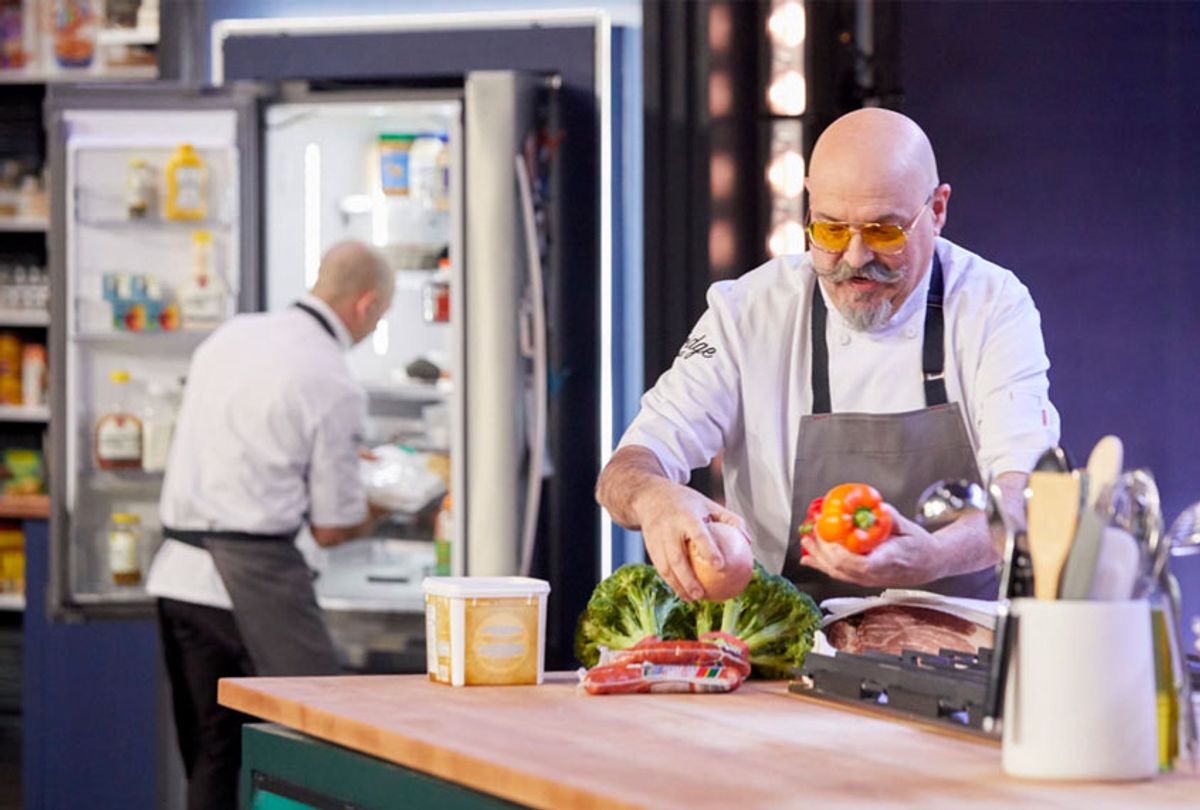 Think about what your refrigerator looks like in that two to three day window before you finally break down and head back to the grocery store  — especially now, during the pandemic.

You know what I'm talking about; the vegetables are starting to wilt, there's a nearly empty carton of eggs and while there isn't enough leftover pasta to reheat for a full meal, there's too much to just toss it out.

There's probably a lot of random items, too, like that half-full tub of shrimp paste you dip into occasionally to make curries, or maybe an unopened culinary gift — homemade pickles or a jar sourdough starter from a friend who was going through a bread phase — you've been waiting to use. (You also almost certainly have a surplus of chickpeas.)

During that window, it takes some creativity to throw together an even moderately tasty dinner. And that concept — culinary ingenuity in the face of the mundanity of week-to-week home cooking — is exactly what makes the CW's "Fridge Wars" and its predecessor, Korean import "Chef & My Fridge," the only kind of cooking competition shows I want to watch right now.

The premise of "Fridge Wars"is simple: Two competing professional chefs are challenged to cook a gourmet meal using only the ingredients taken from the refrigerators of ordinary families. Unlike programs like "Chopped" or "Iron Chef," there isn't a pantry of additional ingredients or spices for the contestants to draw from. What you see is what you get.

The meals are then served to and judged by the families whose fridges were raided. The chefs don't get to speak with them beforehand, so they have to try to assess their tastes based on the items in and on the refrigerator, like family vacation photos and activity calendars.

Sometimes they're cooking for a group of roommates whose reliance on meal delivery apps have rendered their fridge a ticking time bomb of styrofoam-packaged meals ready to expire; other times, they're preparing a meal for a blended Icelandic-Vietnamese family with a fishmonger father.

There's the occasional random last-minute challenge thrown at the competitors, but the meat of the show is in watching someone engage in the all too relatable act of attempting to transform freezer-burned chicken and an assortment of oddball condiments into something sumptuous. Their endeavors can alternately inspire awe or perhaps a little schadenfreude, but each episode made me realize I could definitely be a little more nimble in my own pandemic-era kitchen.

For example, in the face-off between Nicole Gomes and Dustin Gallagher which aired Aug. 16, the two chefs were presented with a fridge that belonged to a healthy-ish, but pretty picky, family of five who are fueled by boxed lasagnas, raw vegetable slices, and Costco-sized wedges of cheese. Most of the stuff that tends to appear on "pantry staple" lists — like citrus, spices and grains — were nowhere to be found.

But the chefs immediately adapt. Gallagher pulses Old El Paso hard taco shells to create the basis of a kind of faux-polenta. Meanwhile Gomes digs around for something (anything!) that could lend a little zing to her curry, before finally finding a tub of olives from the grocery store buffet that were stuffed with shaved garlic, which she promptly extracts and chops.

The family members' reviews are mixed — the kids are hesitant to even try Gomes' curry and Gallagher's tzatziki-based Caesar dressing, while their parents are more game — but I finished watching the episode ready to raid my own refrigerator and see what I could cook up.

I feel the same way after watching "Chef & My Fridge," a culinary competition program that first debuted on South Korea's JTBC network in 2014. Instead of raiding the kitchens of average families, chefs are challenged to cook from the refrigerators of celebrities, ranging from K-pop stars to actors and comedians, many of whom (like in the case of legendary actor Lee Deok-hwa) have no idea what's even in there.

"The project that turns your leftovers into an amazing dish!" the show's title sequence promises. "The best chefs in Korea will take care of your fridge!"

Where "Fridge Wars" is a little more muted — with a sleek set and a light, percussive soundtrack — "Chef & My Fridge" has all the exuberance popular in many East Asian variety programs. There's enthusiastic live commentary, ribbing from the audience, boi-oi-oing sound effects when bottles are opened and a cute animated cat as a mascot. Check out this Korean-language clip in which Gordon Ramsay is a guest competitor:

In the nearly 200 episodes that have been filmed, a lot of different culinary traditions have been represented, from Korean to Japanese to Bulgarian — though thus far, only male chefs have been tapped to participate, which is a ridiculous oversight. Regardless, it's amazing what the chefs can do in the 15 minutes (!) they have to compete; this is the show that made me question why I had never put hollandaise on a grilled cheese sandwich for brunch, or used granola as a coating for pork belly, which could then be served over a savory oatmeal-congee hybrid.

In an era where we're all cooking from home more often — and grocery store trips have likely become either a rare treat or a something more akin to an anxiety-inducing mission away from homebase — the enthusiasm shown by the contestants on both "Fridge Wars" and "Chef & My Fridge" for barren or bizarrely-stocked kitchens is energizing. While like me, you may not have the skills of a professional chef, both programs will hopefully inspire you to survey the contents of your own refrigerator with a chef's eye.

"Fridge Wars" airs Mondays at 8 p.m. ET on The CW or can be found on the CW app/website. A selection of translated episodes of "Chef & My Fridge" are streaming on Netflix.