Sarah Palin: “I would not have prostituted myself” like Kamala Harris for “better press” 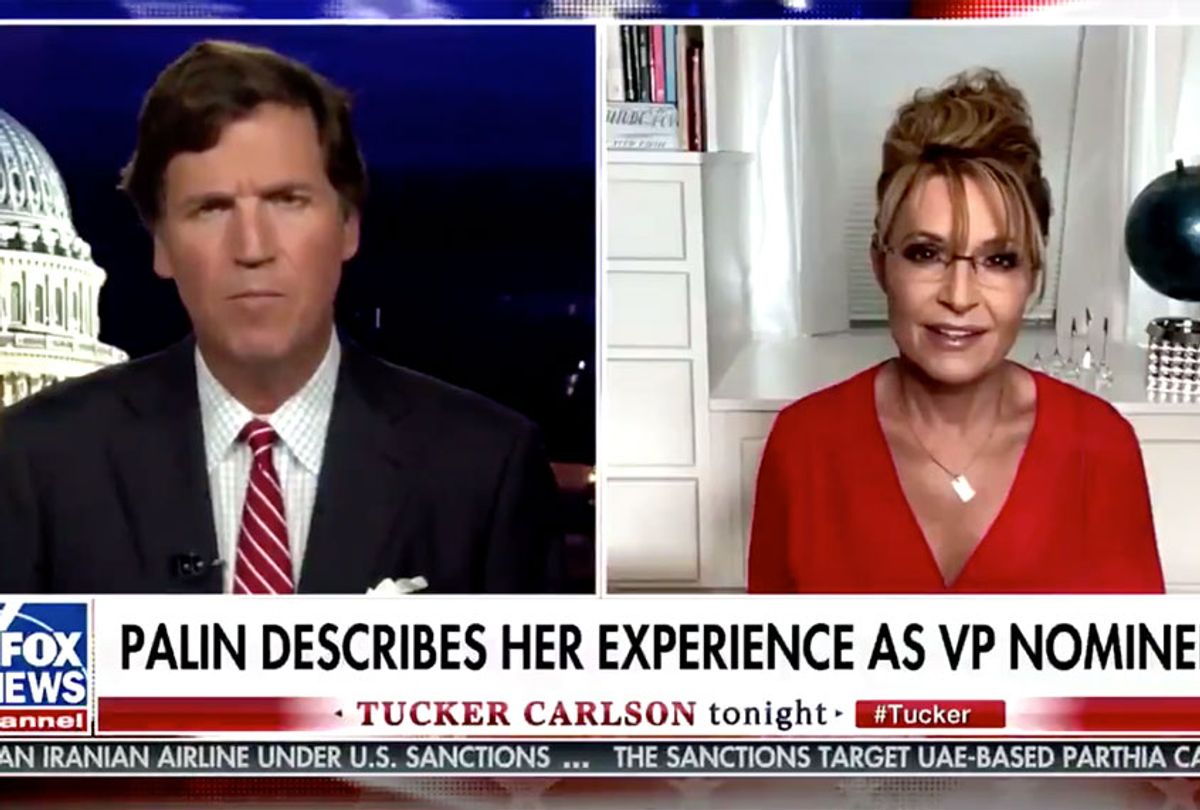 Palin told Fox News host Tucker Carlson that she was "nauseated and just laughing" at the speeches and coverage of the convention, arguing that the media treats Democrats differently than Republicans.

"Remember, these Democrat candidates — they are treated as delicate pieces of china, whereas someone like me, and other kind of hardcore common constitutional conservatives, we're more like the bull in the china shop," she said.

"Looking back, is there anything you could have done to get the kind of coverage that Kamala Harris is getting now?" Carlson asked. "Like, you care about equality deep within your soul. That you're a rockstar. A celebrity. You're the Dalai Lama reincarnated. Could you have done anything to get that kind of coverage?"

"I would not have prostituted myself in terms of changing any of my positions in order to garner better press," Palin replied. "I would've gotten a lot better coverage had I compromised my convictions — had I decided that I was going to go with the flow in order to get that . . . liberal coverage that would have been so much better."

Alternet's Cody Fenwick refuted Carlson's and Palin's characterizations, noting that she received glowing reviews from the media after her 2008 Republican Convention speech, with outlets describing her as a "conservative rock star" and praising her "speech of a lifetime."

Media Matters' Parker Molloy took issue with Palin's principled stance, noting that she was "most recently seen as a contestant on The Masked Singer, where she sang 'Baby Got Back' wearing a bear costume."

Palin went on to criticize former Republican strategists Steve Schmidt and Nicolle Wallace, who ran the McCain-Palin campaign in 2008 before becoming fierce critics of President Donald Trump on MSNBC.

The former vice presidential candidate alleged that "there was a lot of sabotage going on" inside the campaign — "especially at the end of the game there." She described herself as a "victim" of the McCain strategists.

"Wolves in sheep's clothing," Palin called the pair. "So, you know, those of us who were kind of victims of what they are capable of — it's kind of vindication for us. Because it's like, 'See? Told you so! They were never on our team to start with.'"

Schmidt, one of the "Never Trump" conservatives behind the Lincoln Project, hit back at Palin on Twitter.

"Over the last 12 years. Once she was able to rid herself of the treachery and disloyalty of her staff she soared like an Eagle…. Not," he added.