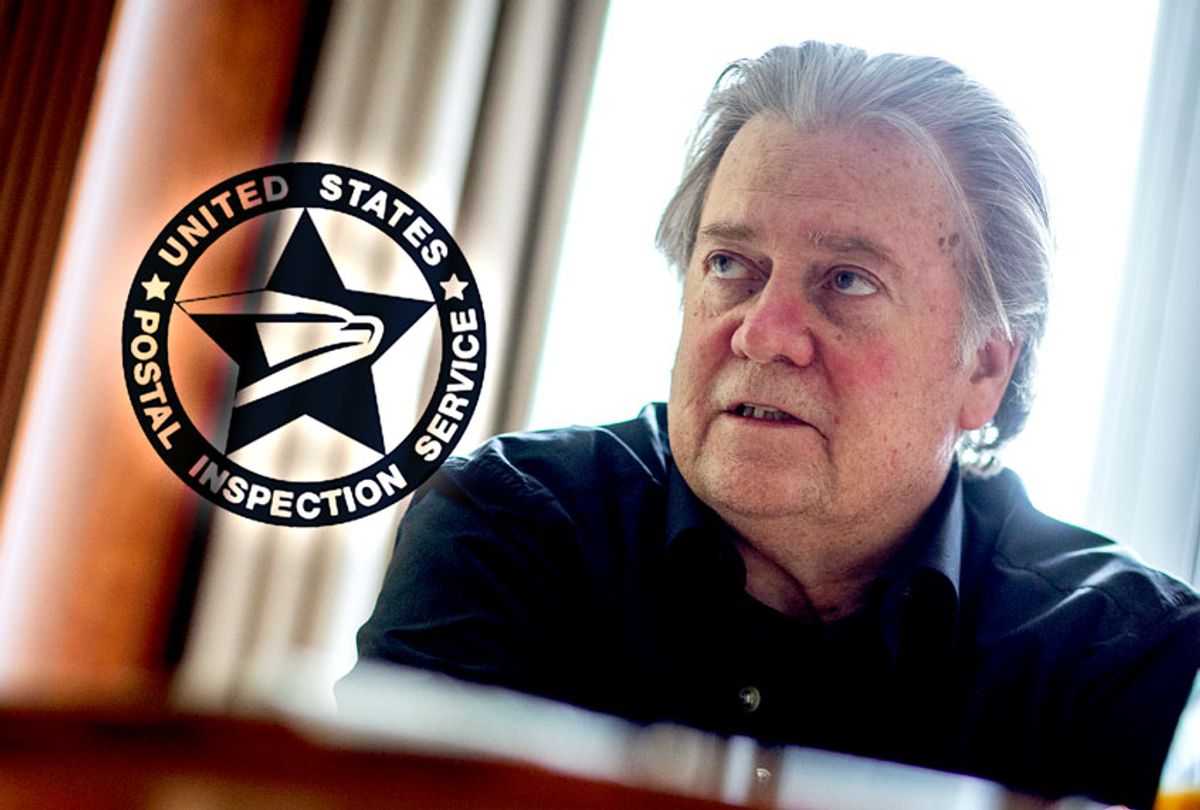 Bannon was reportedly arrested Thursday by Postal Service agents while aboard a boat off the coast of Westbrook, Conn. He pleaded not guilty to the charges later that afternoon.

On Friday's edition of his "War Room" podcast, Bannon called the arrest a "political hit job" in order "to stop and intimidate people" who support Trump's wall on the U.S. southern border with Mexico.

"I'm not going to back down. This is a political hit job," Bannon said. "Everybody knows I love a fight."

Prosecutors indicted Bannon along with three co-conspirators on charges of money laundering charges and wire fraud. The charging document alleged that the four men skimmed off hundreds of thousands of dollars for personal use from an online crowdfunding campaign designed to help make Trump's campaign promise to build a wall along the country's southern border with Mexico a reality.

"As alleged, the defendants defrauded hundreds of thousands of donors, capitalizing on their interest in funding a border wall to raise millions of dollars, under the false pretense that all of that money would be spent on construction," Audrey Strauss, the acting U.S. attorney for the Southern District of New York, said in a statement.

Strauss acknowledged the Postal Inspectors department — or USPIS — in her statement: "We thank the USPIS for their partnership in investigating this case."

USPS Inspector-in-Charge Philip R. Bartlett said in a joint statement that the defendants showed "no regard for the law or the truth."

"As alleged, not only did they lie to donors, they schemed to hide their misappropriation of funds by creating sham invoices and accounts to launder donations and cover up their crimes, showing no regard for the law or the truth," Bartlett said.

"This case should serve as a warning to other fraudsters that no one is above the law — not even a disabled war veteran or a millionaire political strategist," he added.

The USPS' involvement in Bannon's arrest provides a stunningly ironic twist given that President Donald Trump — on whose campaign Bannon served as chief executive in 2016 — has spent months claiming, without evidence, that mail-in ballots invite widespread fraud and election interference.

Though it remains unclear what role the USPIS played in the Bannon investigation, the indictment at one point refers to the alleged creation of fraudulent invoices related to a non-profit operated by Bannon and a shell company under the name of one of his co-defendants.

The USPIS is the law enforcement, crime prevention and security arm of the Postal Service. Postal inspectors are federal law enforcement agents who investigate postal-related crimes — e.g., child exploitation conducted via mail, crimes against agency workers, mail fraud and theft, threats made by mail and the shipment of contraband. The service boasts about 1,200 agents, who are authorized to carry weapons, serve subpoenas, make arrests and execute federal search warrants.

Inspectors investigated 576 reported threats and assaults against postal employees during 2019, making 247 arrests that resulted in 154 convictions, according to Postal Service data. They also executed 2,562 arrests for illegal-narcotics related cases.

A weekly CBS TV series called The Inspectors was based on real-life USPIS cases, but got pulled in 2019 after four seasons.

In a statement to Salon, an agency spokesperson said the division's mission is "to ensure America's confidence in the U.S. Mail by enforcing more than 200 federal statutes involving crimes that may adversely affect postal customers or fraudulently use the U.S. Mail or the postal system."

Trump appeared to publicly admit that he opposed supplemental congressional election funding for the beleaguered agency in order to sabotage plans to expand voting by mail. The president's Postmaster General Louis DeJoy has also been implicated by Congressional Democrats.

Numerous recent reports have detailed how policy changes handed down under DeJoy have cut overtime and slowed down mail delivery across the country. Speaker of the House Nancy Pelosi, D-Calif., and Senate Minority Leader Chuck Schumer, D-N.Y., said in a letter to DeJoy last week that he had "confirmed that contrary to prior denials and statements minimizing these changes, the Postal Service recently instituted operational changes" shortly after he assumed office.