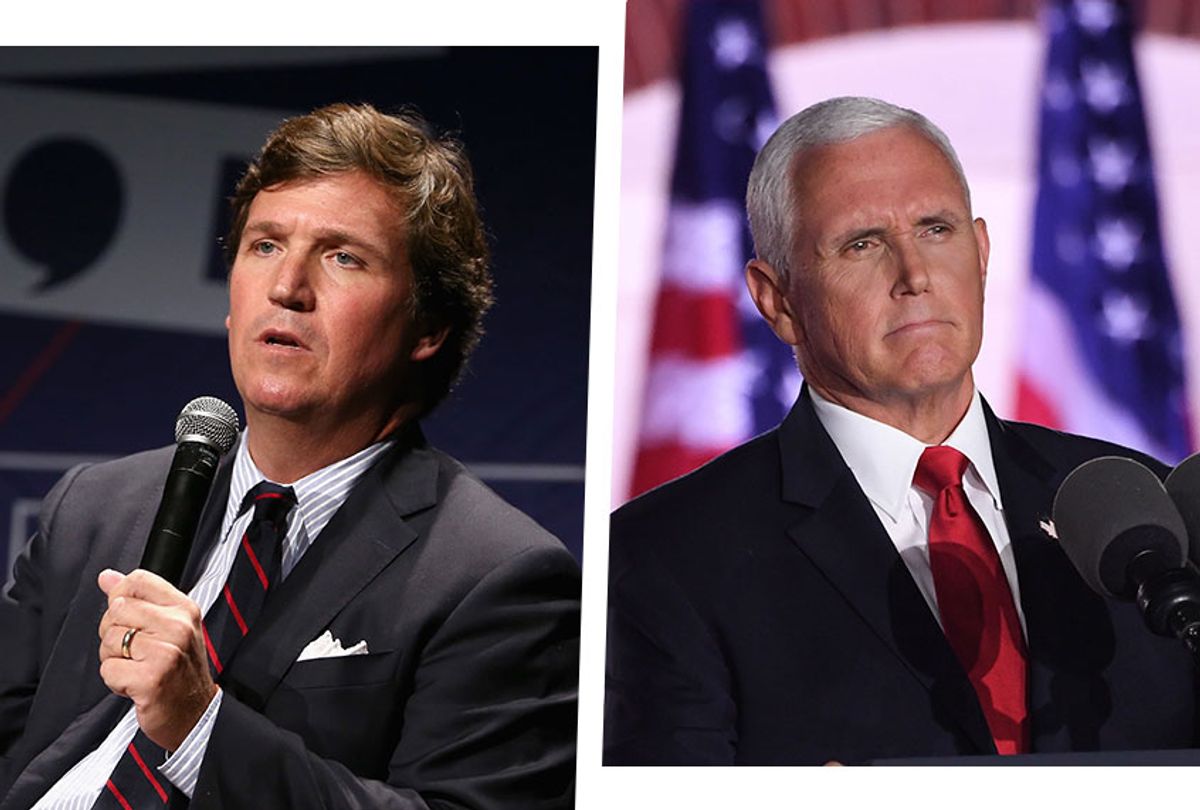 Under Donald Trump's leadership, Republicans have figured out their election strategy for 2020: Actively incite and encourage violence, and then turn around and feign outrage while promising voters "law and order."

It's a strategy Trump employed in Washington, D.C., when he ordered federal police to tear gas peaceful protesters in Lafayette Square, clearly hoping to use the chaotic images that ensued to bolster a lie about protester violence. He did it in Portland, Oregon, sending in federal police for the sole purpose of causing violent clashes he could blame on protesters. He tried to pull the same stunt at his "comeback" rally in Tulsa, Oklahoma, but failed because local police didn't take the bait and avoided attacking peaceful protesters.

But while Trump's provocations have backfired as often as not, his strategy of instigating violence and then blaming it on "the left" has started to spread among the Republican ranks and Fox News. Wednesday night, at both the Republican National Convention and on the party's favorite propaganda network, the tactic of inciting violence under the guise of "law and order" was on full display.

Tucker Carlson, whose Fox News show is increasingly indistinguishable from white nationalist forums online, wasn't even subtle about it. His opening segment on Wednesday night tried to turn Kyle Rittenhouse — a 17-year-old charged with murder after allegedly shooting three Black Lives Matters protesters, killing two of them, in Kenosha, Wisconsin, on Tuesday night — into a hero.

"How shocked are we that 17-year-olds with rifles decided they had to maintain order when no one else would?" Carlson said, after claiming, in a shameless lie, "Kenosha has devolved into anarchy because the authorities in charge of the city abandoned it."

None of this is true. Kenosha has had unrest in the streets since police shot a man named Jacob Blake in the back seven times in front of his children. As with most protests across the country that have turned violent, this isn't because local cops abandoning their posts, but because police are actively making it worse.

As USA Today reported earlier this week, protesters in Kenosha were largely peaceful on Sunday night until cops used the "emergency curfew" declared by the county as an excuse to start tear-gassing the crowd. It was only then that the fires and other unrest followed, all kicked off by police aggression.

Rittenhouse, a Trump supporter with an adolescent fascination with police, had gone from his hometown in nearby Illinois to Kenosha to join militia groups who claimed they were there to "help" maintain order. Any fool can see that was not their real purpose. This was a bunch of right-wingers who have spent years soaking in violent fantasies and see the protests as an excuse to lash out against people they demonize as "social justice warriors." These militias are all too often openly supported by police, who may be less interested in keeping order than in cracking down on protests.

Unsurprisingly, then, the presence of the militia led to more disorder and violence, not less. And it's truly rich for Carlson to claim some enthusiasm for "order" when he's actively glorifying a young man who is accused of murder — whereas no BLM protesters in Kenosha have killed anyone, or been accused of doing so.

Vice President Mike Pence might have been more subtle with his rhetoric, but he was no less guilty than Carlson of encouraging right-wing violence in his keynote speech at the Republican National Convention Wednesday night.

After claiming to believe that the "violence must stop," Pence went on to lament the death of Dave Patrick Underwood, a federal police officer "who was shot and killed during the riots in Oakland."

This claim was wildly misleading. Pence clearly meant his audience to believe that BLM protesters (or antifa, or other "radicals") had killed Underwood. In fact, those accused are Air Force Staff Sgt. Steven Carrillo and an accomplice named Robert Justus, who appear to be affiliated with the far-right "boogaloo" movement.

Boogaloo adherents want to turn the current racial tensions brought on by Trump's overt racism and police violence into an occasion for a new civil war, and have been openly plotting to exploit BLM protests as cover for violent acts that they hope will to kick off such a conflict.

In Facebook messages just before the killing, Carrillo explicitly said, "We have mobs of angry people to use to our advantage."

While feigning outrage over Underwood's killing, Pence was giving the alleged murderer exactly what he wanted: A bait-and-switch in which BLM protesters are blamed for violence caused by the right. It may have been more sophisticated than what Carlson was doing, but Pence was still encouraging right-wing militiamen to act on their violent fantasies, by signaling that they'll be rewarded by the Trump administration helping them elevate their false narratives.

Don't buy Pence's crocodile tears over a dead officer. If he was actually opposed to police being killed, he wouldn't be encouraging the boogaloo movement like this.

Trump's belief that he needs violence in the streets in order to be re-elected has now become the common wisdom of the Republican Party and Fox News. And since Trump thinks he needs violence, the order of the day is to incite it, by any means necessary. All this Republican hand-wringing over "law and order" is disingenuous in the extreme. Trump wants violence, and by God, his allies are going to give it to him. They don't much care who gets hurt or killed along the way.