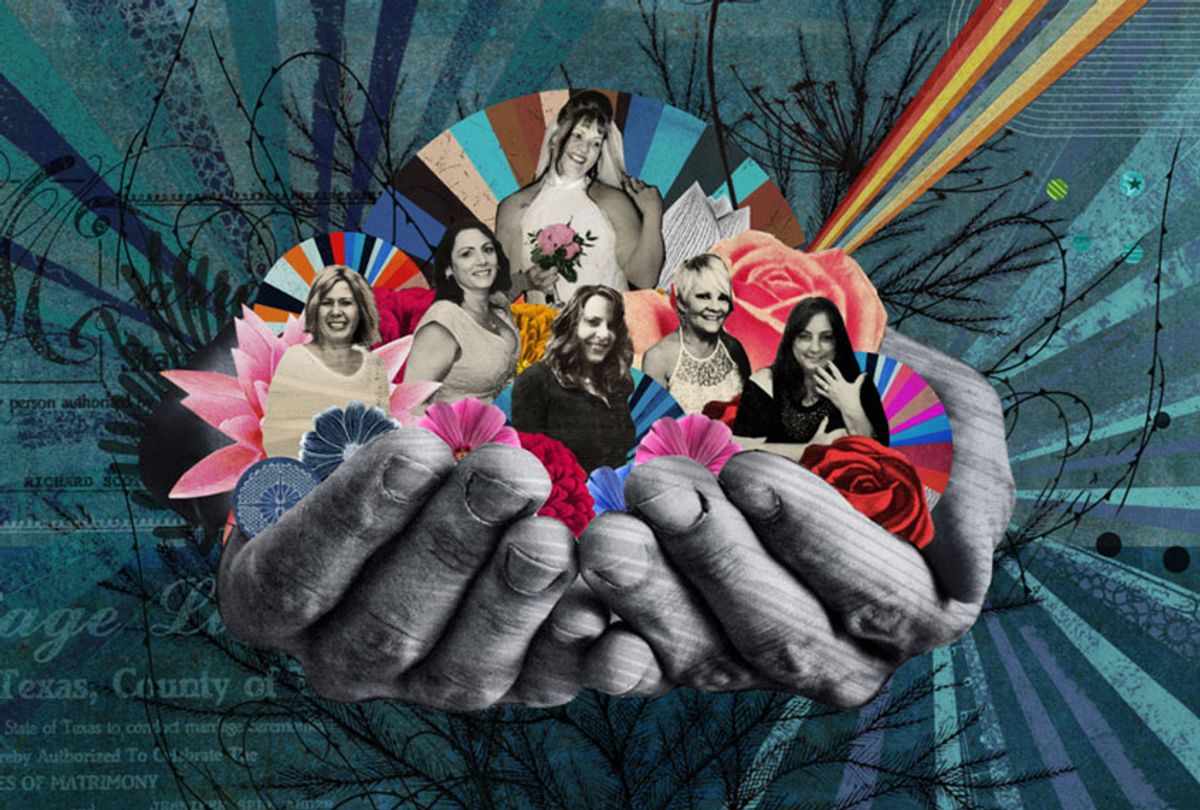 When Tracy met Richard Scott Smith, she was a single mother who describes her life at that time as consisting of working, paying bills and not much else. Her whirlwind romance with Smith began with a motorcycle ride that gave her a taste of the freedom and fun that a life with him would afford her.

Ellen remembers dining out at Applebee's and Cheddar's with Smith, where he generously bought her wine. Smith was the perfect partner, she says . . . and at one time Sabrina would have agreed with her. She recalls coming home from work to discover gifts left on the bed. Smith made Sabrina feel like God finally sent the man she'd been praying for all these years.

These stories are our gateway into "Love Fraud," which makes everything that follows all the more tragic and infuriating even though the average person can get where these women's stories are headed.

One minute she and Smith were dating, Tracy recalls. Soon he was sleeping over and not long after that, he was moving in. Ellen tells a similar tale: weeks after they started seeing each other, he popped the question. Ditto for Sabrina.

Each woman is unique, but all fit a familiar profile – single (mostly) and self-supporting in their 40s or perhaps their 50s. The married women he seduced are bored or unhappy and ripe for distraction. Their courtships with Smith move quickly, to the point that Tracy's daughter Kayla became suspicious at how fast her mother was falling for this man who still felt like a stranger. So Kayla decided to do a little digging.

A brief online search yielded a website with Smith's photo at the top, followed by a blog post warning about the new man in her mother's life. Tracy and Kayla knew him as Mickey, but he had other aliases, including Scott, Richard, and Rick.

There may indeed be smoother and more prolific serial scammers than Smith operating in the wild. Ewing and Grady simply happened to come across the blog exposing Smith precisely at the time when they were scouting out subjects for a documentary about con artists in the vein of "Dirty John."

And this is the point that "Love Fraud" directors Heidi Ewing and Rachel Grady are making with this project: Men like Smith are distressingly common. In fact, the typical nature of his crimes works in the series' favor. Most people will never be indoctrinated by a cult, but just about everybody knows somebody who dated some jerk who ruined their credit or cleaned out their checking account.

They also know such fraudsters so common that police in multiple states can't be bothered to enforce the warrants against Smith or anyone like him. But a bigamist who is the subject of a revenge blog is enticing enough of a subject for the filmmakers actually participate in tracking him down. And they do so part by calling upon Showtime's resources to bankroll the hunt.

"Love Fraud" is very much a work in which every participant evokes a keen awareness of the genre's tropes. Smith's victims are candid and genuine in their vulnerability and frustration, and they're also visibly driven in a way that people aware of the camera's power tend to be.

The players in this story don't travel in exclusive or exotic circles, either. Most of the action takes place in Kansas and Tennessee, although the blog and the series indicate that Smith left a trail of broken hearts and busted fortunes in other states. These are very much Everywomen.

And once we meet Smith, as we eventually do, we quickly realize that he's actually the definition of basic. The man's sole extraordinary feature is in the fact that he crossed and angered enough women that a few of them decided to team up with a Kansas City bounty hunter and finally take him down.

Said bounty hunter, a grizzled, chain-smoking crusader named Carla, knows she's a character and plays up her toughness for the camera; she knows she's the main object of fantasy casting here (aside from Smith, who in his heyday resembles a bargain basement Bill Paxton, may he rest in peace). To her credit, she's not wrong.

In one scene, Carla stares out into a meadow and waxes poetic about the deadly ferocity of Ozark women. In many others she reliably cusses and spits nails whenever she catches evidence of Smith swindling yet another woman while continuing to evade her. But Carla's frustration is infectious, and as Smith continues to stay barely one step ahead of her a person can't  help but express amazement at this slimeball's sheer audacity.

"Love Fraud" doesn't come across as expressly an advocacy project or as even all that justice driven. At best it's an odd confluence of true crime, documentary tropes, and visual artistry. The familiarity of this situation that makes "Love Fraud" watchable if not indispensable; it's basically an event series version of a "Dateline" mystery that crashes in to a "Cheaters" episode around hour three.

This being premium cable, Ewing and Grady elevate production by employing eye-popping animated mixed media collages by British artist Martin O'Neill to evoke Smith's mindset or give life to the stories he tells via disembodied voice recordings of phone conversations. The filmmakers decided to use these visually adventurous asides instead of employing the cheap action recreation plot, and this choice adds to the sense of seduction and disillusion that fuels the narrative.

And the common nature of this story means "Love Fraud" could easily expand into an anthology series, that given the popularity of this genre, isn't the worst idea. There's a smidgen of comfort in knowing that so far, none of Smith's victims has perished.

On the flip side, that also means he's still out there, as are many men like him. Sometimes the potential for a subject to generate sequels isn't necessarily good news. But it can make for tasty viewing.