The "most profitable fast food franchise in the world" is struggling to keep its staff safe, workers say 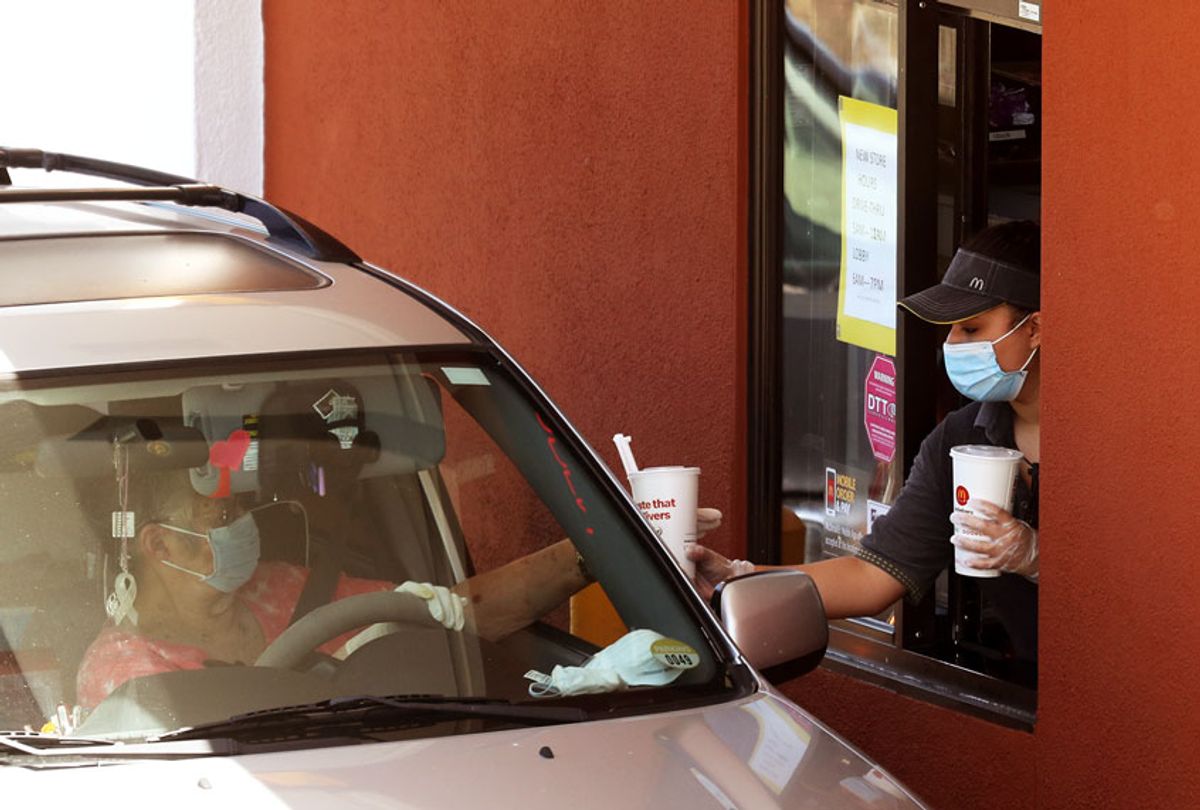 A worker wears a mask and gloves as she hands soft drinks to a customer at a McDonald's drive-thru on April 22, 2020 in Novato, California. (Justin Sullivan/Getty Images)
--

Broken plumbing preventing hand-washing, a malfunctioning A/C making it difficult to breathe with a mask on amid a heat wave, and arbitrary favoritism allowing some workers to skip safety checks were just a few of the egregious claims made by Northern California McDonald's workers. Their health complaint, filed on August 29 with the Santa Clara County Public Health Department, fits into a pattern nationally — in which front-line workers at McDonald's around the country have cried foul at what they perceive as shockingly lax safety protocols amid an atmosphere in which COVID-19 outbreaks among fast food workers are all too common.

According to the complaint, "there isn't warm water to wash hands in the mornings and the bathrooms have been closed because the toilets were clogged," at the McDonald's at 1150 S. De Anza Boulevard in San Jose.

The two workers who signed the complaint also say that the air conditioner is broken, "creating excessive heat in the front, lobby and drive-though areas and making it difficult to breathe with a mask." The complaint states that the air conditioner hasn't been working for "as long as a month" and that the problem became more dire when California experienced a heatwave with record-breaking temperatures earlier this month.

"These past weeks were really hard," Maurilia Arellanes, who has also worked at the San Jose McDonald's for nearly a year and is one of the two workers to file the complaint, told Salon in an interview via a translator. "My hands were really sweaty; we were sweating everywhere and it was just really hard to breathe with a mask on and our hands were sweating because of the gloves and some people were trying to put their masks down to be able to breathe."

Indeed, the convergence of a heatwave, pandemic and wildfire smoke put frontline workers in a very vulnerable position.

"When wildfires are raging and filling the air with smoke while frontline workers need to wear masks to protect themselves from COVID-19, McDonald's shouldn't force its employees to choose between breathing properly and staying safe," Allynn Umel, Campaign Director for the Fight for $15 and a Union, told Salon in a statement. "McDonald's is the most profitable fast-food company in the world, and they should be able to do something as simple as maintaining air conditioning in every store to ensure that cooks and cashiers are healthy and safe."

Equally troubling, the complaint alleges "abusive behavior" by the store manager, including "favoritism, retaliation and screaming at coworkers." The workers in the complaint allege that certain workers who are favored by management are allegedly allowed to skip COVID-19 safety measures like regular temperature checks and wearing a mask. The complaint adds there is "a climate of fear where coworkers do not speak up and take action for safety, for fear of having hours and/or days cut from our schedules."

Libertad Vazquez, who has worked at the San Jose McDonald's for nearly a year and is the second worker on the complaint, says he regularly sees workers skip health checks or not wear their masks properly at 1150 S. De Anza Boulevard in San Jose.

"I have also seen that a certain maintenance worker enter [sic] the store without symptom screening by the supervisor," Vazquez writes in the complaint. "I have seen that when the store is busy and there is a wait to be screened, he is able to skip the line and clock himself in without a temperature check and without being asked if he has COVID-19 symptoms or if he has been exposed to COVID-19."

Arellanes said managers don't encourage workers to wash their hands despite it being a key recommendation by the Centers for Disease Control and Prevention for restaurant workers.

"Sometimes the managers use a timer and enforce hand washing every 30 minutes, but most of the time they do not use the timer and it is up to each person whether or not they wash their hands," Arellanes writes in the complaint.

In an interview, Arellanes explained that employees are often told to "hurry up" in the bathroom if they're taking too long, usually waiting for the water to warm up.

On the McDonald's website, the company states that its restaurants "are continuing our high standards of promoting regular and thorough handwashing and reminding our crew members of our best practices for personal hygiene."

Arellanes tells Salon that to date, there have been no known cases of COVID-19 in the store.

The claims in the complaint have been denied by Peter Ou, the owner and operator of the McDonald's in question. In a written statement Ou said: "Our highest priority is to protect the health and well-being of our people, and we are deeply disappointed in these allegations, which do not at all reflect what is happening in our restaurant as we work to protect and provide for our people and serve the community during this difficult time."

All of the utilities at our restaurant located at 1150 S De Anza Blvd in San Jose are operating properly, including the HVAC system, water heater, and restrooms.

To help ensure the safety of our employees and customers, we are conducting thorough sanitization procedures on a nightly basis as well as sanitizing and disinfecting high touch point areas in the restaurant throughout the day, PPE is in ample supply, and gloves and masks are provided to our crew members on a daily basis. We're also conducting wellness and temperature checks before each shift.

Additionally, this restaurant is currently only serving food via drive thru, delivery and carry-out. Our dining room is not open at this time. We require all customers picking up carry-out orders to wear masks. We've also installed protective barriers at the counter and drive thru, in addition to adhering to social distancing guidelines and enhanced hygiene procedures.

The claims of these workers are reminiscent of other complaints from McDonald's workers in the region. On August 27, workers at a McDonald's in Gilroy, California, held a rally protesting a lack of air conditioning amid other concerns that the workers have been raising about COVID-19 since June. According to a complaint filed by one worker on August 27th to California's Division of Occupational Safety and Health (Cal/OSHA), there have been "several" COVID-19 cases at 6990 Automall Parkway in Gilroy, California. As Salon previously reported, at a Berkeley, Calif. McDonald's, multiple employees contracted COVID-19, and some were asked to deep-clean the store themselves in exchange for food rather than pay.

Beyond California, there have been more reports throughout the pandemic of insufficient measures being taken to protect McDonald's workers from COVID-19. According to a report published at the end of August by the Oregon Health Authority (OHA), McDonald's was one of several fast-food chains experiencing  "active workplace outbreaks with five or more confirmed COVID-19 cases." In April, a COVID-19 outbreak at a Chicago store led workers to file a complaint with the Occupational Safety & Health Administration alleging managers did not alert all employees about a night-shift worker contracting COVID-19.

Back in San Jose, Arellanes said she hopes the complaint motivates public health officials to fix the air conditioning at the S. De Anza Boulevard location, which she says hasn't happened yet, in addition to safety measures being taken seriously in her workplace.

"I want us to be treated better and equally, and also to have the necessary equipment and for the temperature of the store to be fixed," Arellanes said.