New Guinea singing dogs, renowned for their ethereal howls, are no longer believed to be extinct

For 50 years, the dogs were thought to only live in captivity. Their rediscovery provides hope for conservation 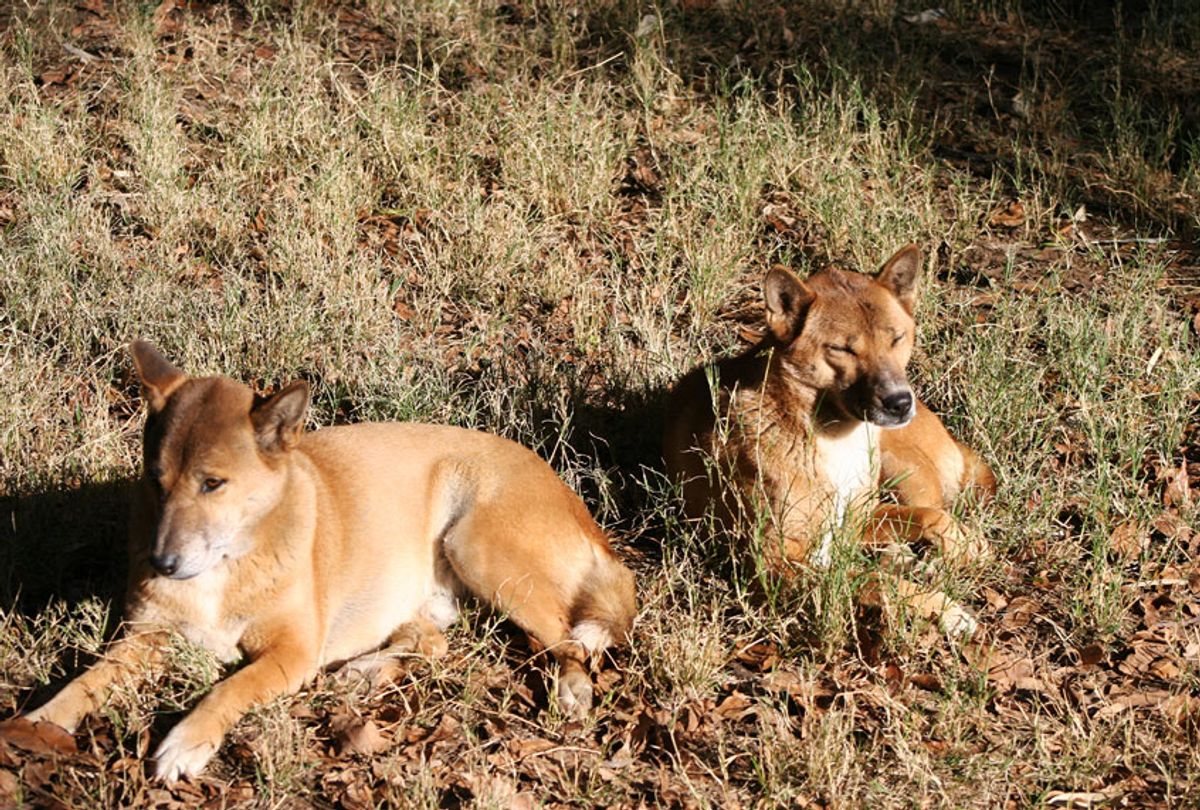 Human activity on Earth has led to a surge in extinctions, which is what makes it so exciting that the New Guinea Singing Dog, which scientists have thought for decades only survived in captivity, may still survive in the wild after all. The singing dogs, which can breed with domesticated dogs and are closely related to Dingos, are beloved for their ethereal, choral howls.

The study, which was published Monday in Proceedings of the National Academy of Sciences, analyzed the genetic material of a population of canids known as highland wild dogs that were discovered in the New Guinea highlands. These dogs howled in ways that sounded an awful lot like the New Guinea Singing Dogs of the past, even though the species has not been seen outside of inbred zoo populations and the occasional exotic pet collection since the 1950s. Scientists became intrigued in 2012 after an ecotourism guide photographed an animal that looked like a New Guinea Singing Dog and, by 2018, a researcher was able to collect DNA samples from three specimens (two temporarily trapped dogs and a third one that had died).

The DNA results came back, and provided scientists with good news: These were not ordinary village dogs that had wandered away from their homes, but were direct relatives of New Guinea Singing Dogs. To be exact, the wild dogs shared a 72 percent genetic similarity with New Guinea Singing Dogs that are held in captivity — and that genetic diversity among the wild dogs is probably a good thing, since all of the captive dogs are descended from seven or eight wild ancestors.

This news has major implications for how scientists and the general public can understand dogs.

"These dogs form a group with Dingos that appear to have separated from the ancestors of the average breed dog long before breeds were created," Dr. Heidi G. Parker, a co-author of the study who works at the Dog Genome Project for the National Human Genome Research Institute at the National Institutes of Health, told Salon by email. "They may represent one of the earliest forms of dogs."

She added that our new information about New Guinea Singing Dogs may shed new light on the domesticated dog breeds that so many people know and love.

"Studying this group of dogs may help us establish a timeline for the development of the modern breed types that are so popular now," Parker explained. "Not when the breeds were created but when the modern types of dogs became abundant."

Parker expressed cautious hope that the New Guinea Singing Dogs could be revived.

"We don't know enough right now about the size of the remaining population and how diverse it is. We hope that this will increase interest in these dogs and in preserving them," Parker told Salon.

Salon also spoke with James McIntyre, director of field research at the New Guinea Highland Wild Dog Foundation, who conducted all of the field research involved in the study. He explained that New Guinea Singing Dogs are very different from the domesticated variety to which so many of us have grown accustomed.

"if you looked at it from a relative distance, you would say, 'Oh, that's a dog,' but if you were to get a little bit closer, there's something very unique about it," McIntyre told Salon. "And you would probably ask somebody, 'Hey, what kind of dog is that?' Because there is something that is unique to them that you don't see and haven't seen. And a lot of it is the way their eyes are set and that all these dogs are extremely intelligent, athletic, flexible. They have a very strong predatory urge."

After noting that it takes a "special kind of person" to keep one of these dogs in their home, McIntyre elaborated that "they don't come when they're called. And like I said, they're very predatory, so you don't want to have a little Shih Tzu or your cat out when this dog gets out. It's just their nature. They're highly predatory. They're more cat-like in their intelligence and disposition than they are like a dog, and in their athletic ability they're almost somewhere between a monkey and a cat than they would be a dog. They're extremely agile."

Study co-author Dr. Elaine Ostrander told Salon that scientists had believed that the dogs were extinct in the wild for half a century.

"So the punchline is that people thought New Guinea Singing Dogs were extinct in the wild and this study shows that they, in fact, are not," Ostrander, an American geneticist at the National Human Genome Research Institute of the National Institutes of Health, told Salon by email. "This changes what we thought about dogs.  We know that New Guinea Singing Dogs have not been seen in the wild for over 50 years. The only ones that we knew existed are in conservation centers and are derived from very small numbers of founders many decades ago. Those dogs are losing genetic diversity."

Ostrander said the discovery of a wild population gives hope that the species can be prevented from suffering a genetic bottleneck, both in the wild and in captivity. "The discovery that the Highland Wild Dogs are the original New Guinea Singing Dog give us hope that we can restore the breed/species to its previous genetic status and diversity," Ostrander said.

There have been other intriguing studies of canid genetics to come out in 2020. A study in June published in the journal Proceedings of the Royal Society B revealed that London foxes could be unintentionally self-domesticating because of their close proximity to human beings. The physical signs included urban foxes having wider snout tips and smaller brain cases. Later that same month, a study published in the journal Science found that sled dogs like Alaskan Malamutes, Siberian Huskies and Greenland sledge dogs are genetically connected to an Arctic dog from roughly 9,500 years ago. This more than tripled the length of time that scientists believed sled dogs had been around.