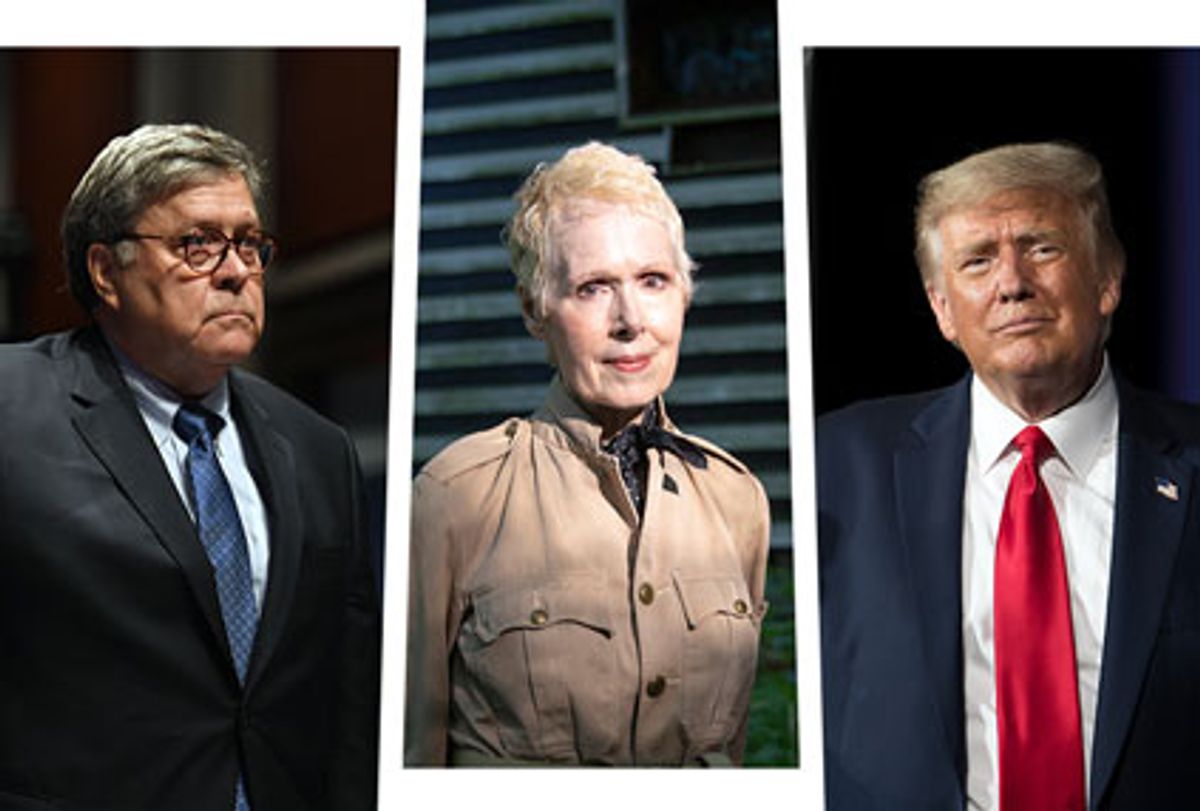 At the Republican National Convention, the topic du jour was "cancel culture" and Republicans' supposed defense of free speech against censorious progressives. This was always transparent nonsense, an effort to recast liberals or leftists who exercise their freedom of speech to criticize right-wing intolerance as some kind of attack on open discourse. Donald Trump's own attacks on the rights of his political opponents to express themselves — ranging from tear-gassing peaceful protesters to voter suppression efforts — far surpass the damage to free speech of even the most excessive Twitter leftists hunting down political heretics.

Now the Trump administration is at it again, this time using the might of the Department of Justice to silence one of the two dozen women who have accused Trump of sexual abuse.

Last year, veteran journalist E. Jean Carroll publicly accused Trump of rape, coming forward with a story about Trump assaulting her in the dressing room of a Manhattan department store in 1995 or 1996. The story didn't get nearly the media coverage it deserved at the time, even though Carroll is a highly credible person and two witnesses recall her telling them about the alleged rape at the time.

Unfortunately, the reason for the media's relative lack of interest wasn't that journalists didn't believe Carroll. It's because Trump's history of sexual assault is "old news." The president was famously recorded bragging about how he enjoys sexual assault, and it didn't seem to move the needle at all when it comes to his popularity with his base. Besides, the statute of limitations had long since expired in New York on rape, making it impossible to press criminal charges against Trump. So much of the press basically yawned.

But Carroll hasn't given up. Instead, the former advice columnist for Elle sued Trump for defamation in November, for saying she was "totally lying" and that she is "not my type." (Carroll actually looked, at the time, quite a bit like Trump's first two wives: Thin, pretty, blonde.) In typical Trump fashion, he told an easily disproved lie, claiming he had "never met this person in my life," even though there was a photograph of the two of them talking at a party included with the original story Carroll published in New York magazine.

Earlier this year, Carroll upped the ante by unearthing the dress she wore the day of the alleged rape and demanding Trump provide a DNA sample so she can prove it was him. This sort of thing, of course, has a precedent. In the late 1990s, a DNA test on a semen-stained dress ended up being important proof that Bill Clinton had an affair with Monica Lewinsky. At the time, Republicans had no problem using DNA evidence in a case against a president, even though no one saw that affair, as problematic as it was, as anything resembling rape.

But now, even though the accusations against Trump are far more serious, Attorney General Bill Barr is taking dramatic action to protect Trump from having to turn over evidence. On Tuesday, the Justice Department took over Trump's defense from his personal lawyers, arguing that, by saying a woman is ugly and and a liar, Trump was "acting within the scope of his office as President of the United States." Seriously.

"This law is designed to protect government employees like mail carriers who are involved in accidents with their postal trucks," Barbara McQuade, a law professor at the University of Michigan, told Salon, adding that this shouldn't cover Trump's comments, which "seem to be purely within his personal capacity."

McQuade also warned that this move could allow the court to simply "dismiss the lawsuit because the government has sovereign immunity over claims of defamation."

Barr has always viewed his role as a taxpayer-funded defense attorney and political attack dog for Trump, rather than as the nation's top law enforcement official. He's spent his time as attorney general ginning up lies about Trump's opponents, downplaying Trump's corrupt and criminal behavior, and publicly defending Trump's schemes to cheat in the election.

This is just more of the same. Taking the case over this way moves it out of New York state court, which rejected Trump's delaying tactics on turning over evidence, and puts it in the hands of a federal court. It also means that Trump, who is always trying to shift his personal expenses onto someone else, could force the taxpayers to cover not just his legal expenses but any damages that might be awarded Carroll in the lawsuit.

That said, it's a little surprising that Barr is bothering with this. Even if Carroll's lawyers managed to snag that DNA evidence, it's unlikely it would make much difference, politically speaking. No one doubts that Trump is a sexual predator. Again, he's on tape bragging about it. Anyone who is likely to vote for Trump simply doesn't care that he sexually assaults women. Some of them probably think that makes him "manly" and admirable.

This is probably less about saving Trump's re-election prospects than about Barr and the conservative movement lashing out against the #MeToo movement, and against the women who have stepped forward to tell their stories of sexual harassment and abuse at the hands of powerful men in the past few years. Bringing the weight of the DOJ against Carroll sends a strong signal to would-be accusers that it's better to stay silent rather than risk the wrath of those in power, who will do anything and pull any lever to protect the dirty secrets of predatory men.

Republican hostility towards #MeToo has calcified after an initially confused response in the early days. Conservatives enjoying watching a few prominent Democrats, such as Hollywood mogul Harvey Weinstein and Sen. Al Franken of Minnesota, fall from grace. Soon, however, the right quickly realized that #MeToo posed a very real threat to male dominance, which is a bedrock principle of the conservative movement.

While a Republican rejection of the #MeToo movement was inevitable, it all came to a head during the confirmation hearings for Supreme Court Justice Brett Kavanaugh, after Christine Blasey Ford stepped forward to accuse him of attempted rape when both of them were teenagers. The outrage against Ford continues to burn bright in conservative circles, even though her testimony failed to keep Kavanaugh off the bench, and even though he was the one who told obvious lies under oath, not her.

No, the right wing's exaggerated anger at Ford is clearly about her having the nerve to speak out in the first place. It's about restoring a social order where women were expected to tolerate abuse at the hands of men, especially powerful men, in silence.

Barr's move is similar. Using maximum force to try to stop Carroll isn't just about this one case, but about sending a signal to any woman with a story to tell: There is nothing to be gained from speaking out or fighting back. It's about making sure would-be accusers fear that the system will crush them for even trying to get justice. Forget "cancel culture." This is just an old-fashioned effort at intimidating women into silence.