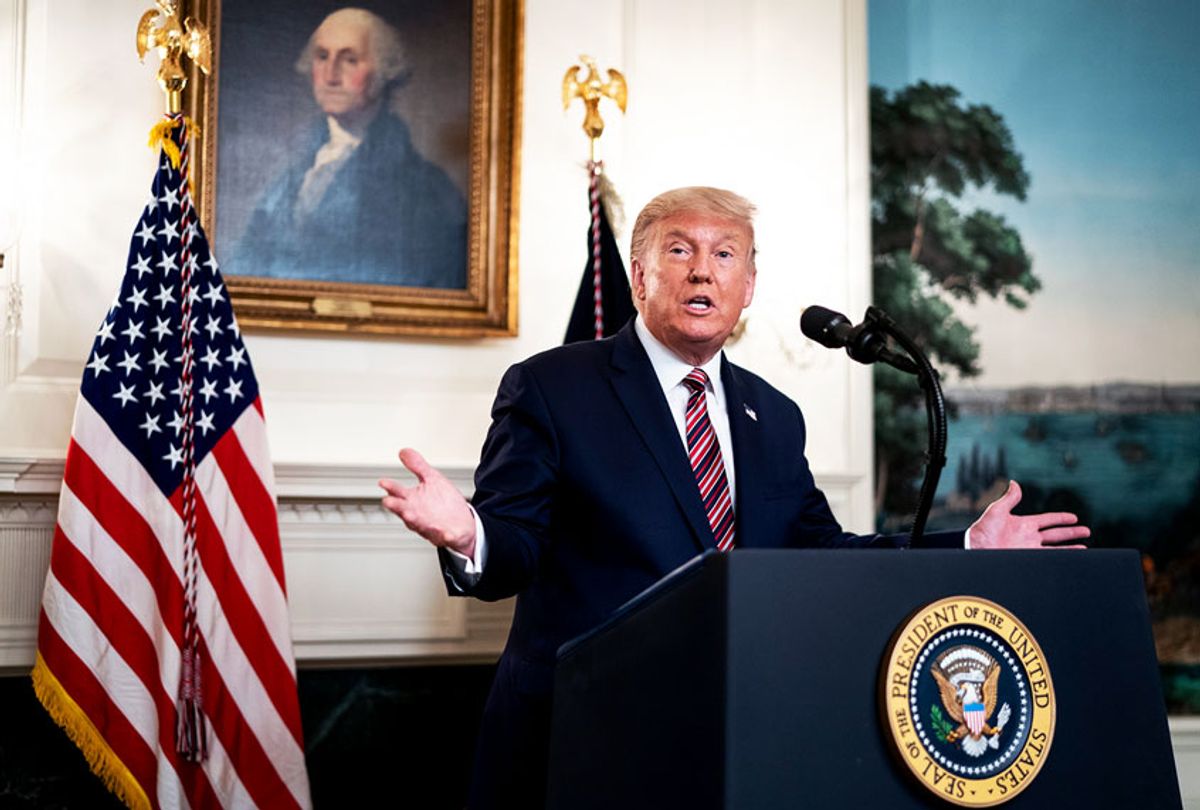 U.S. President Donald Trump announces his list of potential Supreme Court nominees in the Diplomatic Reception Room of the White House on September 9, 2020 in Washington, DC. Trump also fielded questions about the coronavirus and Bob Woodward's new book about him. (Doug Mills-Pool/Getty Images)
--

On Wednesday morning, veteran journalist Bob Woodward released audio recordings of two damning interviews with Donald Trump, conducted in the weeks before the coronavirus pandemic swept the U.S. In those conversations, the president revealed that he was knowingly lying to the public about the dangers of COVID-19.

"I wanted to always play it down," Trump told Woodward on March 19, when the transmission rate was still low and there was a real chance of containing the virus — but only by telling the truth about the risks so the public would take the problem seriously.

Now, with 190,000 Americans dead and more than 6.3 million infected, Trump has declared that he was fully justified in repeatedly lying to the public about the dangers of the coronavirus, even though those lies led to numerous states reopening prematurely and millions of Americans refusing to take basic precautions such as wearing masks.

"I don't want to create panic, as you say," Trump claimed at a White House event Wednesday afternoon, adding that he lied to the public in order to "show confidence."

This is transparent BS. The reality is that people needed to "panic" over the coronavirus, or at least to become seriously concerned and alarmed. All that means, in this context, is taking the virus seriously and following public health recommendations to keep from transmitting it. Trump's desire to delude the public was rooted in a total lack of concern for anyone but himself and his desire to gaslight his way to re-election.

But also, the truth is that Trump loves it when people panic — but only over imaginary threats he's conjured up to distract them from the economic collapse and a pandemic that may kill close to 250,000 people by Election Day.

The Republican National Convention was one long panic-inducing nightmare, with speaker after speaker commanding viewers to work themselves into a frenzy over fantasy dangers like antifa and "cancel culture." Trump's entire campaign strategy is to portray the country as a war zone, exaggerating incidents of violence at protests, blaming "the left" for violence started by cops and right-wing militias, and portraying protesters as "rioters" and "looters," even though the vast majority of Black Lives Matter protests have been peaceful.

Trump's RNC speech was full of admonitions to panic and lurid, false warnings that his Democratic opponent, Joe Biden, plans to "demolish the suburbs," set loose "400,000 criminals onto the streets and into your neighborhoods," "defund police departments all across America" and hand control of the government over to "wild-eyed Marxists."

None of this, it must be said repeatedly, is true. But as with Trump's QAnon supporters — who spend their days on the internet pursuing traces of an imaginary Satanic pedophile ring, while pointedly ignoring the real problems in the world — Trump wants even his less nakedly insane voters to focus their worries on fictional problems.

Trump's devotion to phony threats over real ones was evident in a Wednesday report, which was largely drowned out in media coverage of Woodward's coronavirus revelations, that the Trump administration reportedly forced the Department of Homeland Security to falsify reports about various threats to national security.

"A whistleblower is alleging that top political appointees in the Department of Homeland Security repeatedly instructed career officials to modify intelligence assessments to suit President Donald Trump's agenda by downplaying Russia's efforts to interfere in the US and the threat posed by White supremacists," CNN's Zachary Cohen reported.

Along with downplaying real threats from white supremacists and Russian intelligence conspiracies, DHS was also instructed to exaggerate the risks of violence from "Antifa and 'anarchist' groups," Cohen wrote.

The Trump administration is deliberately trying to invert reality. In the real world, the violence in the streets is primarily the fault of right-wing forces. In some cases, it's because of police tear-gassing and beating peaceful protesters, which is what has kick-started most of the cases of protests turning into riots.In other cases, it's the result of right-wingers deliberately running down protesters in cars, shooting protesters or even cops, and descending upon liberal communities to terrorize residents, all with the explicit blessing and encouragement of Trump and his allies.

No one should deny there is a subset of antifa and self-identified anarchists who also desire violence, and who are eager to seek street fights with far-right and fascist groups. One self-proclaimed antifa member apparently shot and killed a member of the right-wing group Patriot Prayer in Portland, Oregon, on Aug. 29. (The accused shooter was himself killed by U.S. marshals in Washington state a few days later.)

But the violence from "anarchists," although regrettable, pales in comparison to what we've seen coming from the right, including from Trump, who set a dire example by ordering the tear-gassing of hundreds of peaceful protesters outside the White House.

More to the point, Trump's overall fear-mongering message — including the claim that crime is suddenly sky-high and that the "suburbs" (which in his mind means only white people) are imperiled by violent thugs — is yet another mirage that Trump is using to distract the public from America's real woes.

Crime, even violent crime, is down overall in the U.S., and remains near historic lows. The murder rate has gone up — likely a result of the pandemic and the economic implosion, both of which are the doing of Trump and the Republicans — but is still much lower than it was in the 1980s and '90s, the era that Trump tries to evoke with all his dark talk about "American carnage." On the long list of things for Americans to worry about, crime is close to the bottom.

The good news is that Trump's "look over there!" strategy isn't working with voters. Polling shows that voters continue to rate the economy and health care as major priorities over crime. Just as importantly, more voters say they believe Biden will keep them safe than that Trump will. Turns out that even if you imbibe some of Trump's paranoid worldview, the fact that it's all happening on his watch is not much of an argument for his re-election.

Obviously, there's no defense for lying to the public about the dangers of the coronavirus, and Trump's feeble effort to claim he was trying to prevent "panic" is morally bankrupt in the face of 190,000-plus dead Americans.

But even as a statement of intent, Trump's claim that he wanted to avoid "panic" is a lie. Trump craves panic, so long as he believe he can benefit from it. That's why he is forever telling Americans to panic about all sorts of phantasmagorical dangers, while begging them to ignore the real horrors brought forth by his malignant dereliction of duty.