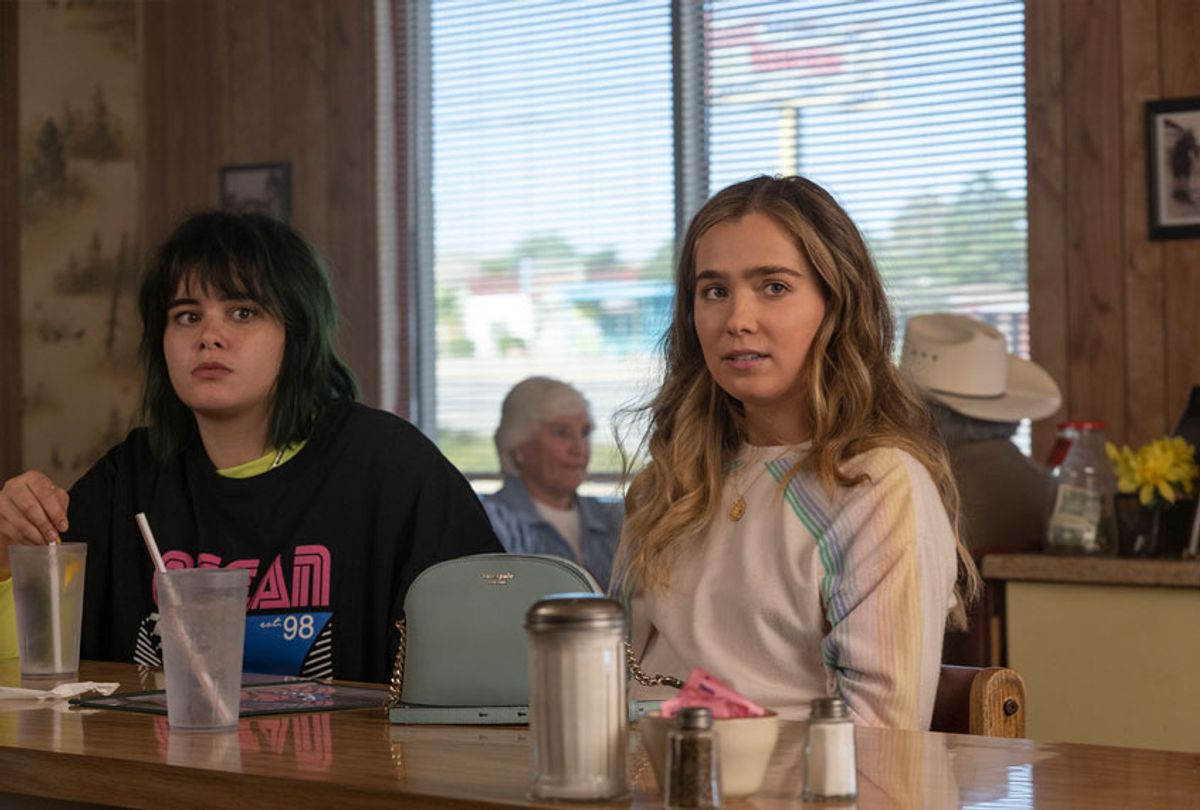 While watching "Unpregnant" I could shake off the nagging thought of the massive unfairness it illustrates. That's the point of it, of course; the movie wouldn't exist at all, if not for the constraints patriarchal dominance places upon women.

Honestly, though, it's amazing that in 2020, young female characters are required to contend with a serious, frustrating and life-altering situation that would be tragic in any other context to justify being the central focus of a road trip comedy.

Think about it. This is a well-trodden genre we're talking about there and one awash in any number of classics about spontaneously piling into a car on a stupid mission engineered to create mayhem by way of side trips and kooky randos they meet along their path.

But while all it takes to justify such an adventure for guys is the hankering for White Castle sliders or a fear of having their girlfriend get hold of an incriminating package, for women it's a matter of survival. "Thelma and Louise" had the time of the end of their lives back in 1991, but that was a side effect of shooting a would-be rapist who committed assault – and remember, their vacation's final frame freeze of them in mid-air as they're sailing off a cliff to their deaths.

"Unpregnant," directed by Rachel Lee Goldenberg, irreverently references Ridley Scott's 1991 classic; only 30 years following its release, the interpretation of that famous ending has left a different mark on high school seniors Veronica (Haley Lu Richardson), outwardly the portrait of the high school golden girl, and her ex-best friend Bailey (Barbie Ferreira), who wears her outsider status in the form of rock tees and severe black hair interrupted by a swatch of Manic Panic green.

Rebel that she is, Bailey is the one at the wheel frantically driving away from the type of crazy pursuer that's a standard motif in these movies – but when the young women reach their fateful cliff, Bailey makes it glaringly clear that she's in no mood to be anyone's martyr and reroutes accordingly.

That rubber-on-gravel, dust storm of a scene yields as much of a well-earned laugh as many moments before it and afterward. Nevertheless, the very title of the movie is a reminder of the motivating factor that brought Veronica to Bailey's door and moved the pair to seize the moment – and the vintage Pontiac Firebird parked in her mother's garage – and hit the road.

Girls can't simply quest for the fun of it, understand. We must have a purpose for our risk-taking adventurousness. In this case, Veronica and Bailey's journey of nearly 1,000 miles and across several state lines, from Missouri to New Mexico, is incited by Veronica's need for an abortion.

This factor – the road trip quibble, not legal abortion – shouldn't detract from anyone's enjoyment of "Unpregnant," a confection placing far more emphasis on Veronica and Bailey's burgeoning confidence in their own identities and self-assurance they gain along their journey than the appointment they're trying to keep at its destination.

This is in line with the tone of Ted Caplan and Jenni Hendriks' novel, upon which "Unpregnant" is based – and being a read targeted at young adults, it emphasizes the rekindling of the girls' lost bond while affirming their individual choices as opposed to fretting over what Veronica intends to do once the pair arrives at their destination.

Actually that aspect of the story is liberating – there's no dithering, no questions about whether she'll regret terminating her pregnancy and very little, if any, deep consideration about whether she'll lose the affections of her eager boyfriend Kevin (Alex MacNicoll). Helpfully, Kevin isn't the most sympathetic character in the world, which also bolsters Veronica's view that neither of them are ready to be parents. The moment she tells him she's pregnant, he's ready to use the fetus as a reason to tie her down, and soon his awkward efforts ramble over into stalker territory.

The insouciant spirit fueling "Unpregnant" is admirable, in fact, and amply pumped up by Ferreira and Richardson's ebullient performances.

Ferreira, know to most for her sensitive performance in "Euphoria," achieves a spectacular balance of mordant delivery and raucous joy that add an essential brio to what might otherwise be a basic by-the-numbers strange and long trip. The sparkle she pours into Bailey doesn't dim what Richardson brings to Veronica, whom she plays as intelligent and grounded – and canny enough to prevent us from completely falling for the cultivated image she projects – despite having surrounded herself with a vapid, gossipy clique.

The flipside of this is that "Unpregnant" makes a very real, tragic and increasingly dangerous situation impacting the health and wellbeing of millions of poor women into an incidental device, and at a time when women's reproductive rights are being viciously assaulted.

This is not to imply that there can never be a comedy made about abortion, just that this trifle should not be viewed as the standard bearer. Veronica and Bailey are well-off, for one thing; their road trip is not born out of economic necessity, and one gets the sense that their bickering over Bailey's unhealthy road snack choices and the montage of campouts at the side of the road are mainly to add to the slapdash tone Goldenberg is attempting to create here.

The overall message is that although they have a very limited monetary resources on hand, these girls are broke teenagers, not poor.

To understand that difference, rent Eliza Hittman's ungentle and gray indie drama "Never Rarely Sometimes Always," which depicts how much more grueling a much-shorter interstate journey can be for women of very little means. That film's protagonists only have to travel form their small town in Pennsylvania to New York City, yet the weight of that odyssey is many times more ponderous than Bailey and Veronica's sunny expedition.

However, that's also a film where abortion is the driving force with the women at the heart of the story struggling to break free of multiple insistent forces clawing to keep them in their place. "Unpregnant" nods at those pressures, but mostly as a means of pushing Bailey and Veronica down the road. There's a lovely interlude between Betty Who and Ferreira made to tug at the heartstrings, but the other characters the duo run into on the road (played by Sugar Lyn Beard, "Road Trip" star Breckin Meyer, and Giancarlo Esposito) are the usual brand of wolves in lambs' clothing or vice versa.

At its climax "Unpregnant" does its expected service of specifically laying out the stakes of this trip when Veronica rants at a low point, "I should not be here! I should be able to just walk down the street, and open a door and waltz right in and say, 'Hello. My name is Veronica. My boyfriend is an asshole. Here's my $500. Oh! Oh! Yes, I would love a cup of water. Thank you so much! That's so sweet of you. But no. Nope!"

She goes on to ask, "Why in the hell do you have to have parental consent to get an abortion, but not to give birth to a child?"

A fair question, asked in the context of a very light treatment of a serious subject. At least the message is there, even if "Unpregnant" doesn't dig too deeply beyond that. But I would submit that no road trip film is gunning its engine for a heavy cause. "Unpregnant" deserves points for representing ably enough women in a largely unserious genre dominated by men. And I look forward to the day when a couple of women can hit the road together running toward something unserious instead of roving for a cause, and losing its thread even if they arrive exactly where they're scripted to be.