What TV still needs to show us about abortion

TV does a decent job of showing abortion is safe. But it rarely shows how difficult it is to access for so many 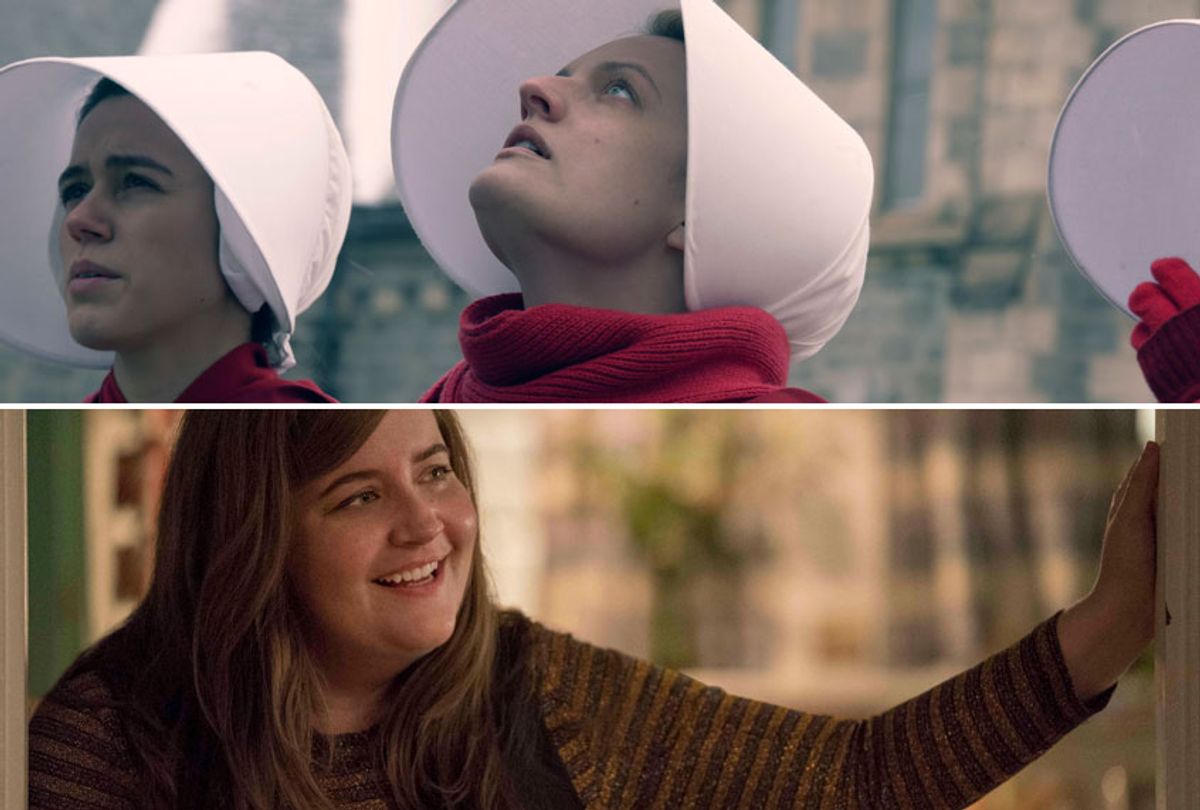 We’re watching abortion happen on television. That’s not in question. But I wonder if the problem is that we weren’t keeping an eye on the right shows.

I’m not talking about “Shrill,” which you should watch if you haven’t already. The very first episode depicts its heroine, Annie, obtaining an abortion as a necessary step to getting her life on track. We see her head into the procedure confidently and with no fear because it is safe, not at all frightening and explained to her matter-of-factly.

And we, the audience, comprehend that this is the sane choice. The sperm donor in this scenario is an aimless loser who shoves her out of the back door of his place. She has to sneak across his yard and climb over his fence into an alley before she heads home. There’s no need to fret over the pros and cons of keeping the kid, because this is clearly a course correction, due to continue in the show's recently announced second season.

I’m not talking about “Brockmire” either, a comedy whose central couple Jules and Jim careen into a pattern of drunken screwing, accidentally get pregnant, and combine an abortion trip with a weekend getaway.  Jules and Jim abuse alcohol with abandon and at that juncture, have no intent to curb that habit. They weigh the pros and cons of parenthood like two responsible albeit frequently wasted adults; Jim eventually admits he is not parent material although before that, he also declares, “I gave up my vote at ejaculation.”

Together they visit a doctor, and we see Jules terminate a pregnancy by taking two pills, one in the physician’s presence and a second to come later. There’s gagging, and a gag that requires them to head back to the doctor for another tablet, but otherwise they’re set. Two pills. That’s all it takes to safely abort a pregnancy at its earliest stages — like, say, six weeks? — and they’re back to the ball park.

Nor am I referring to “You’re the Worst” and its famous proposal for a date between best girlfriends – “You, me, abobo, and Marie Callender's?” – or the “BoJack Horseman” episode “Brrap Brrap Pew Pew,” in which BoJack’s friend and writing partner Diane sticks to her long-stated stance on not having children by having an abortion while understandably grieving this turn. Nevertheless, her decision is made more uncomfortable when she accidentally tweets the news onto pop singer and client Sextina Aquafina‘s social account.

Since the flamboyant Sextina is a controversy machine, she capitalizes on the oopsie by transforming Diane’s personal pain into a PR ploy. In claiming to be pregnant, Sextina releases an absurd single whose lyrics treat the non-existent clump of cells that is not in her womb like the target of a drive-by. Diane is upset and fears the single will have a negative impact on the pro-choice movement. But it does not change her mind about getting an abortion.

“BoJack” and “You’re the Worst” handle their abortion storylines with a combination of flippant comedy and poignancy, which is the way these shows handle every other plot line. Abortion is a part of life, and it’s not pleasant, but it happens and will happen.

Point being, we've spent years watching the journeys of all of these fictional women and many more, viewing them weigh all kinds of choices and get on with living in a manner of their choosing, responsibly or irresponsibly, which is their right. Abortion is simply one of those choices.

We watched beloved characters on popular series choose to end unwanted pregnancies on “Veep,” “Jane the Virgin,” “Crazy Ex-Girlfriend,” “Scandal,” “Girls, “Grey’s Anatomy” and many other shows for reasons unrelated to health or sexual assault, simply because it wasn’t the right time or they didn’t want to be a parent. Few of these characters were made to justify their decision or even dither over it.

On Netflix’s “Sex Education” the smartest girl in the school has one and shares a recovery room with a grown middle-aged woman who has had one. The woman has other children and is obviously not wealthy, and it's plain that this is not her first visit to that clinic. The nurse judges the woman; she doesn’t care. It’s her decision. She doesn’t want to raise another child.

On “Sex and the City” Carrie and Samantha both announce they’ve had abortions. Carrie even admits that while she doesn’t regret having hers, she felt changed afterward. Which is understandable. She still had it, and went on to become a celebrated sex columnist with way too many shoes.

These confident, optimistic depictions weren’t always as commonplace, relatively speaking. My brilliant colleague Mary Elizabeth Williams wrote an excellent piece that walks us through television's ever-evolving treatment of abortion, reaching all the way back to “Maude” in 1972.

And we should watch all of these stories, mark the evolution, understand how they connect to the eras in which they’re made.

Problem is, these are fiction. What is happening right now in Louisiana, Alabama, Missouri, Georgia and Ohio is reality. Television helps us to deal with reality, largely by ignoring it for a time. At the moment I wonder if these scripted stories succeeded too well.

Actually, that thought occurred to me a year ago when, during a conversation with a cable TV news host, whose name I will not mention, he opined that “The Handmaid’s Tale” — which, for all its faults, is essential viewing — actually made him optimistic, because in his opinion, there was no way that would never happen in America.

Don’t get me wrong — lately TV has done a decent job in portraying abortion as a common medical procedure, one which women can avail themselves of in order to maintain their quality of life, health and well-being. This is yet another demonstration of the important role scripted TV plays in raising awareness, dissipating fear around issues and forwarding the cause of justice.

Cultural historians credit “Will & Grace” for moving the meter on LGBTQ rights in the early Aughts, although we should not count out the success of Ellen DeGeneres’ daytime talk show for its part in clearing the path to the Supreme Court legalizing same sex marriage in 2015.

In 2016 the FX series “The People v. O. J. Simpson: American Crime Story” helped to renew the dialogue about racism and systemic injustice in our legal system, a conversation I hope Ava DuVernay’s Netflix limited series “When They See Us” reinvigorates and complexifies now.

And part of the reason that series is so important in this moment is that we are now in a different day. In 2013 the Supreme Court put a knife in the heart of the Voting Rights Act of 1965 by a 5-to-4 vote. Many Americans only comprehended the ramifications of that decision in late 2016, or October of 2018.

RuPaul is an A-lister, "Will & Grace" is back on network prime time, and numerous series centralize the lives and stories of LGBTQ characters with depth and nuance. In 2019 television also spotlights transgender stars and creatives including "Orange Is the New Black" star Laverne Cox and "Pose" director and producer Janet Mock. Then again, the White House administration has sought to remove questions on sexual orientation from the 2020 census.

The president and vice president have banned transgender people from the military, pushed the Department of Education to rescind non-discrimination protections for transgender students, proposed the removal of anti-discrimination protections for transgender patients in health care, and enacted or proposed many other regressive proposals and policies that would harm the welfare and safety of LGBTQ Americans.

We are now in a different day, and that hard day has dawned in Georgia, Ohio,  Alabama, Louisiana, Mississippi, Utah, Arkansas, Kentucky and Missouri where, reflecting the data of poll after poll, the majority of voters support keeping Roe v. Wade on the books.

However, what we haven’t seen portrayed with much frequency on TV is how difficult it is for millions of women to access abortion services.

Say what you will about the flippant humor in “Brockmire,” but in one moment the bartender in Jules’ establishment lays out everything she had to do to terminate her unwanted pregnancy because the Planned Parenthood in their local town had been firebombed. This includes paying for a round-trip bus ticket to Pittsburgh, where the nearest clinic is located, on top of paying for the procedure and spending several nights in a hotel.  Thank goodness for a small slap of reality in this slice of scripted comedy.

People know about these barriers, right? From time to time, news magazines air in-depth reports after laws take effect. But do people tune in to watch those reports? Not in the numbers that they do for their favorite prime time or streaming scripted shows. In contrast, most of the women featured in abortion storylines range from economically stable to wealthy. They just, you know, get it done.

Perhaps next season we’ll be presented with a prime time character who can’t exercise her choice so easily.

We should be keeping a closer eye on nonfiction, too.

Frontline aired “Supreme Revenge” on Tuesday, May 21, which traces the path to tilting the Supreme Court rightward back 30 years. To more fully understand how and why these hideous heartbeat bills and restrictive, unenforceable abortion bans are circulating now, it’s a good idea to watch it (which you can here).

It’s also important that shows such as “The View” ensure the conversation about keeping abortion legal remains at the fore of the dialogue. The majority of Americans want to keep abortion safe and legal. It’s not just Whoopi who feels that way. It’s not just Hollywood writers.

The problem is, TV helped more people — not enough, but more — understand that abortion is safe. Because it is. A woman’s ability to choose never was.

If people didn’t understand that before, maybe they’re getting it now. But we cannot take that for granted.

On that note, season 3 of “The Handmaid’s Tale” premieres Wednesday on Hulu.