"Friendships and even marriages" were made because of the cube, Rubik says — and unfortunately, "a few divorces" 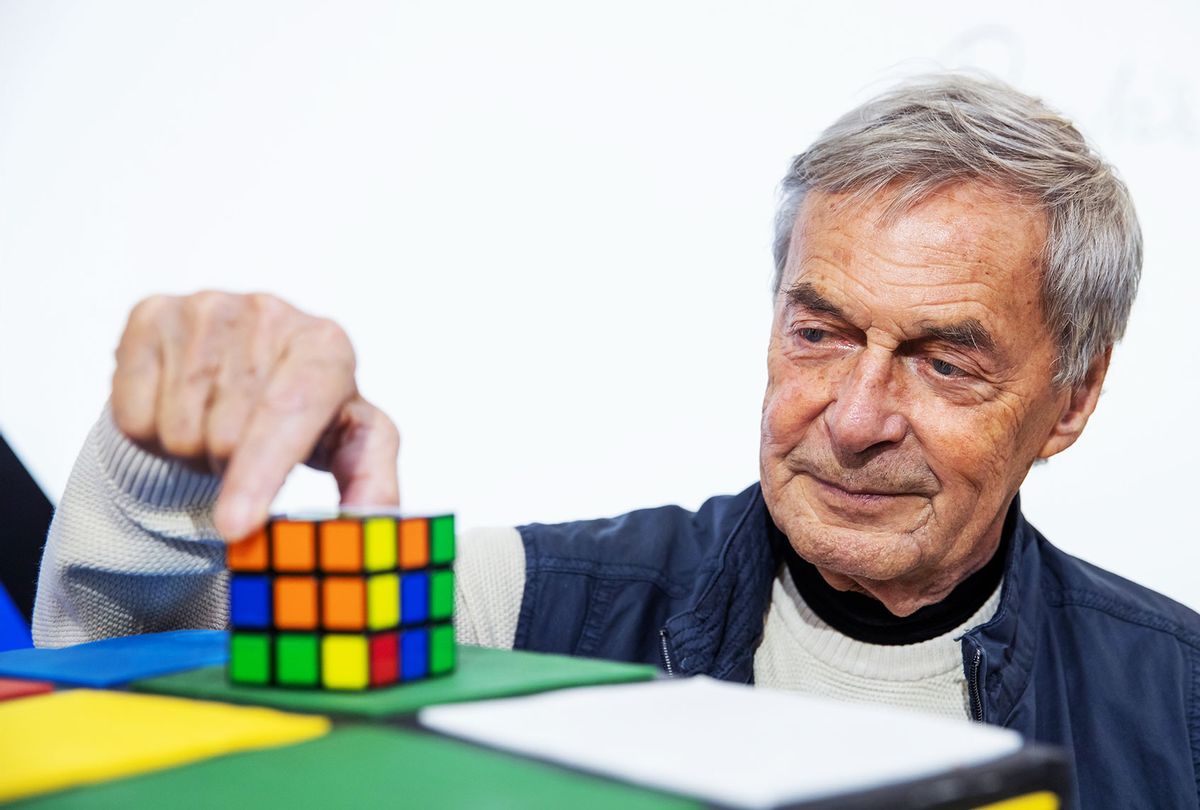 For years I have harbored a shameful secret: I once helped solve a Rubik's Cube, but it was entirely by accident, and I've been too proud to ever try to complete the puzzle again.

I wish I could brag and say I mastered the puzzle of the Rubik's Cube through sheer cerebral power. Yet the nine-year-old version of myself who accomplished this feat was barely paying attention at the time. I was spending a weekend afternoon with my friend, Casey, who had been intermittently turning its various faces for several minutes. When he  shouted an unrepeatable expletive, I looked down to see that I had almost solved the damn thing. We studied it together and finished it in a few minutes, then bragged about it to our elementary school chums. They expected us to repeat the task. We never could.

I'd always wondered what the cube's creator, Ernő Rubik, would think of my experience, and I finally got the chance to ask him. In his new book "Cubed: The Puzzle of Us All," the Hungarian inventor and architect goes into tremendous detail explaining how a bold thirst for knowledge has animated his life. He tells the story of how he invented the toy which bears his name, of course, and how his childhood helped turn him into the man he is today. Going one step beyond this, however, Rubik uses his cube as an allegory for the nature of knowledge itself, a field of study known as epistemology.

In doing so, Rubik makes a number of assertions, each of them quite wise. He insists that "play," which many adults dismiss as a childish waste of time, is in fact essential to both healthy intellectual development and one's capacity to produce great things for society. He argues that curiosity is an underrated virtue in our culture, that we should encourage people to seek knowledge simply because it is fun and cathartic rather than on the condition that the information we find yield some monetary reward. Indeed, although he is clearly not a fan of having grown up "within the economic system of state socialism," Rubik writes that it did bring about the benefit of creating "an overall disregard for financial gain," meaning that creative people could exercise their intellectual powers as fulfilling ends in their own right.

Perhaps most tellingly, though, Rubik says that he enjoys "the fact that the Cube is a healthy microcosm of both success and failure." For him, of course, it was a success in that it made him "comfortably well-off" before he turned 40. Yet even if it had never become a commercial sensation, Rubik writes he still would have considered it an accomplishment for the simple reason that he was able to invent such a successful puzzle. Beyond that, Rubik notes that even people who fail to successfully solve his puzzle still learn from their efforts to do so.

The following is a transcript of an email interview with Rubik; as always, this interview has been condensed and edited for print.

In what ways did your childhood plant the seeds for your ability to develop the Rubik's Cube as an adult?

As the Cube did not follow from anything that had existed before, it would be very difficult to point to anything in particular. Having said that, I certainly enjoyed playing with brain-teasers from a very young age. I also liked the process of solitary creation, such as drawing and painting. My father was a huge influence, although in comparison, I consider myself to be a creative 'amateur'. My father was both a designer and an inventor and was a professional in his field. In the early 1960's he created his most famous aircraft, the R-26 Góbé, which became the classic training glider in Hungary, which was exported to Cuba, Austria, and the United Kingdom. It certainly occurred to me that every time he figured out the structure and the materials and all the details of his designs, he was solving very practical and complicated puzzles.

In what ways do you think the Rubik's Cube is an epistemological metaphor?

The Cube is very much about understanding the complexity of our world. In some areas, like group theory or combinatorics, this link is very specific and direct. In other realms it is indeed more metaphorical: how to think about problem-solving. What is it about human nature that allows for the luxury of spending so much time and energy figuring out a seemingly impossible challenge, when the reward is nothing more than the solution itself?

To what extent, when you write this, are you using your relationship with the Rubik's Cube as a metaphor for how a parent feels about a child, or any creator feels about their creation?

When one becomes a parent, our life changes in very substantial ways. A child becomes a central character in a father's story for the rest of his or her life and beyond. The connection is eternal — but a child has their own, separate life. I very much care for the Cube, I do have a deep sense of responsibility, but I appreciate that the Cube's story is not mine. He became the superstar that I never personally aspired to be.

The Cube is my creation, but the other parent must be Mother Nature. As much as I created it, it also changed me, and it opened up my life too.

There are no definitive answers to these questions, obviously. My own thinking became clearer on these topics and I hoped I could convey some of those thoughts to the readers of "CUBED." However, the book itself, just like the Cube, never really ends. We can always start again and again revisiting these eternal questions about humanity, and so we should.

You mention in your book that you are inspired by how the cube has brought people together. What about the cube has made this possible?

As far as community-building goes, speedcubing has been the most important development. Cubing enthusiasts have gradually created a global sport from purely grassroots effort. It all started in the early 1980's, but really got momentum as the internet provided platforms for niche communities to find each other. Today, there are over 1,000 speedcubing competitions organised every year in over 100 countries. Friendships and even marriages were made thanks to the Cube — but I am afraid the Cube is also to be blamed for a few divorces as well.

More broadly, what lessons about curiosity do you think people could learn from your invention of the cube? It seems like a message that applies across intellectual, artistic and other professional and creative disciplines.

I think curiosity is like thirst or hunger. It's a drive that fills a gap, scratches an intellectual and emotional itch. With curiosity, we have the feeling that something is there but we aren't quite sure what it is. It is the flame that can ignite creativity. There is an internal drive to follow up, and a kind of promise that there may be some discovery of something that is hidden and I may be the only one to whom it is not visible. What is under the surface is the need to understand. In that sense, we are not creators but discoverers.

Puzzles bring out important qualities of ourselves, like curiosity itself among many others. Puzzles are not just entertainment or devices for killing time. For us, as for our ancestors, they help point the way to our creative potential. If you are curious, you will find the puzzles around you. If you are determined, you will solve them.

Curiosity means that we do not take things for granted, that again and again we question even the fundamentals. We find the good questions because we are interested in the "how" of things. That is the only way forward. And here "forward" doesn't mean a predetermined direction or something that can be fixed beforehand, but the openness, not just of the eye, but of the broader vision.

You discuss your beliefs about the importance of education while offering critiques about how we do so. Two that stood out to me are when you point out that we don't really prepare young people to develop their potential intelligence and apply that in a meaningful way in the outside world, and your quote that "I have long hated the whole idea of quantifying intelligence with something like an IQ test and sympathize with those who think this test measures only the capacity to perform well on an IQ test." How do you think we should change our approach to education?

Nowadays what we can really measure in the educational environment is the effort it takes for children to develop their skills.

The arguable measurement of IQ still has a unique appeal as a solid measure of intelligence, and often we forget about the other crucial aspect of human intelligence: emotion. The capacity to understand human behaviour, to feel, to decode the signs of the people around you, you need to be able to wake up some emotional resonance in them.

The Cube is one of the very few examples where the so-called edutainment is a seamless experience. The teachers happily accept it as a vehicle to teach and the students enjoy the playful learning the Cube can provide.

How can people who wish to be autodidacts (which you encourage people to aspire to be) pursue their interests in a way that separates facts from fictions, knowledge from pseudo-knowledge, developing useful skills from engaging in activities that waste their time?

People don't necessarily "wish" to be autodidacts. They sometimes just enjoy or are curious about something so much that they spend a significant amount of time and effort to understand it properly. True curiosity is always honest and open-ended — it is the very opposite of prejudice or preconception. Just like a puzzle is always a fair thing — and if you still cheat, you're cheating yourself!

Rubik's book, "Cubed: The Puzzle of Us All," is now on sale from Flatiron Books.