The battle over Ginsburg's replacement raises the temperature. Will it fundamentally change these two Senate races? 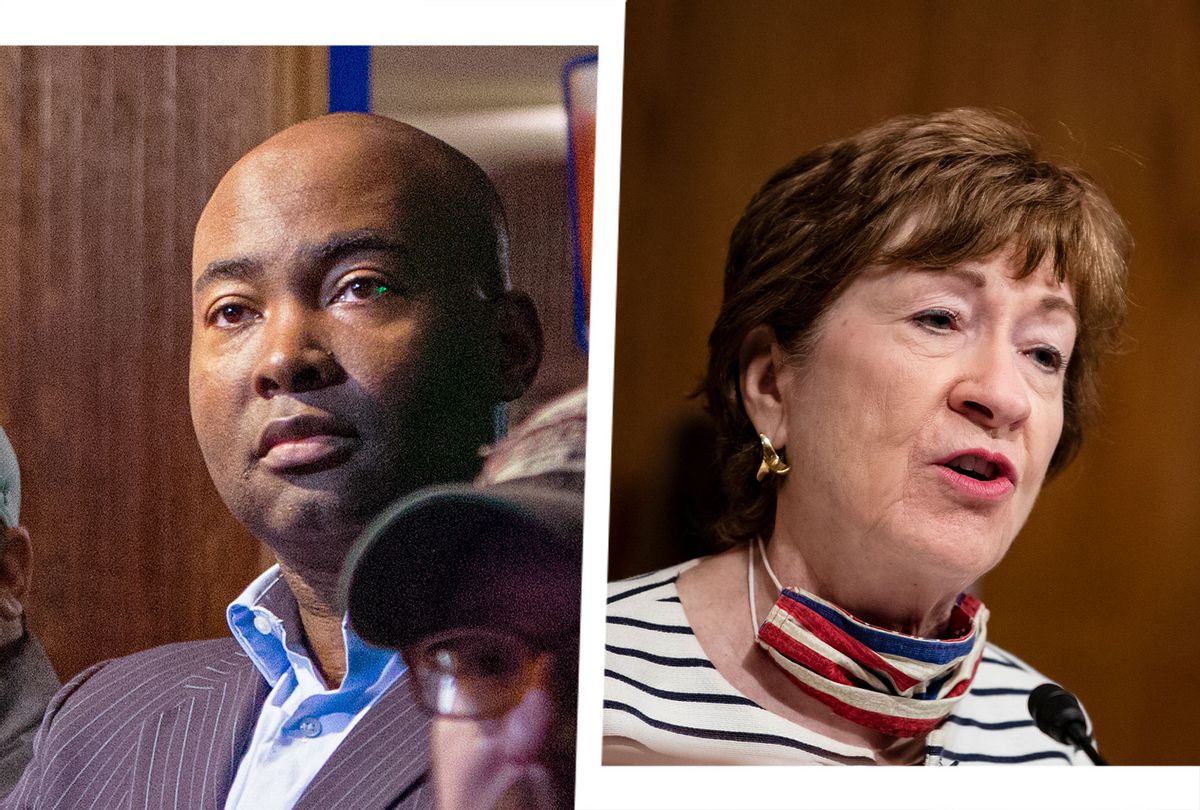 With the Senate poised to begin likely explosive confirmation hearings over President Donald Trump's nominee to replace former Supreme Court Justice Ruth Bader Ginsburg, top election expert Larry Sabato has swung his projection for two critical contests to the left. Their outcomes could determine wether Senate Majority Leader Mitch McConnell, R-Ky., who is leading the charge to fill the seat amid the election, retains control of the upper chamber.

Collins has seen her support erode following her critical vote to confirm another Trump nominee to the high court: Justice Brett Kavanaugh. Graham was one of the leading Republicans who rejected taking up former President Barack Obama's nominee Merrick Garland ahead of the 2016 election. Graham told Fox News host Sean Hannity that he reversed his position following Kavanaugh's confirmation, because Democrats allegedly "tried to destroy" the justice's life.

"Jaime's grassroots movement to bring hope back to South Carolina is growing every day," Harrison campaign manager Zack Carroll told Salon in a statement. "Voters in South Carolina want leaders they can trust, who will use their power to look out for them. But after 25 years in Washington, Lindsey Graham has changed and he's lost his moral compass — he has left South Carolina values behind."

Indeed, the confirmation looms large over both seats. Collins believes the next president should select Ginsburg's replacement. The nominally pro-choice Republican's vote to confirm Kavanaugh, a conservative justice who faced allegations of sexual assault and lying under oath, fractured her support among women in her state. It also sparked a massive national crowdfunding campaign to back the Democrat who would become Collins' opponent.

In the end, that role was filled by Maine Speaker of the House Sara Gideon, who has recently seen her poll numbers surge amid new allegations of corruption against Collins. Gideon posted a 12-point lead over the four-term incumbent last week in a non-partisan Quinnipiac poll.

"The tide has turned on Senator Susan Collins, who was so popular in Maine that she won nearly 70% of the vote the last time she ran," Quinnipiac University Polling Analyst Mary Snow said of that poll. "Likely voters are sending the message that there's no 'middle of the road' when it comes to President Trump, who is deeply unpopular in the state."

Graham, who chairs the powerful Senate Judiciary Committee, will take the lead in high-profile confirmation proceedings. He is expected to try to push Trump's nominee through before Election Day. An individual close to the Harrison campaign told Salon that observers were still uncertain as to how the proceedings would sway voters in South Carolina — an opinion shared by Sabato's Crystal Ball.

In fact, Sabato's team pumped the brakes on releasing these latest changes — which they had finalized Friday morning — after news of the death of Ginsburg broke. In the end, they chose to publish without revision.

Collins, according to Crystal Ball analysts, has two problems. First, while she has maintained some of her crossover appeal, the drumroll of public polls have favored Gideon — of the 16 surveys released this year, Collins has only led in one internal GOP poll from mid-June. When that is combined with Maine's unique ranked choice voting system, Collins faces an uphill battle.

The election forecast rates eight Republican Senate races as "toss-ups" or "leans." Only two of those races are likely to shade more Democratic than the country as a whole in the presidential race, Maine included. And that fact makes the Supreme Court vacancy "an added burden" for Collins.

Harrison, who served as a longtime congressional staffer, D.C. lobbyist and the first Black chair of the South Carolina Democratic Party, has pressured Graham by consistently out-raising the incumbent throughout the year. Reputable polls have reflected a dead heat.

Recent public polling has borne out the Harrison campaign's internal surveys over the summer showing a tight gap, according to Sabato's team. An early August Quinnipiac poll found the two tied at 44%, and another Quinnipiac survey last week showed a tie again last week at 48%.

Harrison's fundraising suggests the support of national resources and enthusiasm in addition to deep pockets. In August alone, Harrison raised more than $10 million; last week, his campaign claimed to have pulled in $2 million in two days. Further, Ginsburg's death has motivated left-leaning voters across the country, who have been pouring money into Democrat-backing groups, some of which will also help Harrison in his quest to unseat the man who oversaw the Kavanaugh hearings.

The Harrison campaign has attacked Graham as a Trump lackey, who has neglected his state in order to retain his proximity to power. Sabato's analysts said this closeness to Trump might prove prickly for Graham, who has tried to distance himself from the president amid the fallout from the administration's botched response to the coronavirus pandemic.

"One actually wonders if Graham, who morphed from a Trump critic in the 2016 GOP primary cycle to a major Trump ally, would be better off trying to solidify his standing with Trump voters instead of trying to generate crossover support," the analysts wrote, pointing out that Graham will likely use his high-profile role in the confirmation process to try to shore up support with the Trump base.

Crystal Ball's analysis also pointed out that South Carolina's ballot featured only one third-party candidate from the far-right Constitution Party, which may eat into Graham's numbers.

"It is possible that despite the pandemic, 2020 could set a modern record for turnout," the report said. "The battle over the court's future turns up the heat of American politics, but the temperature was white hot already."