In "Fargo," comedian Chris Rock gets dramatic as a mob boss whose weapon of choice is the monologue

Season 4 is many things – a crime fable, a serial killer story, a rumination on race – but mainly, it's verbose 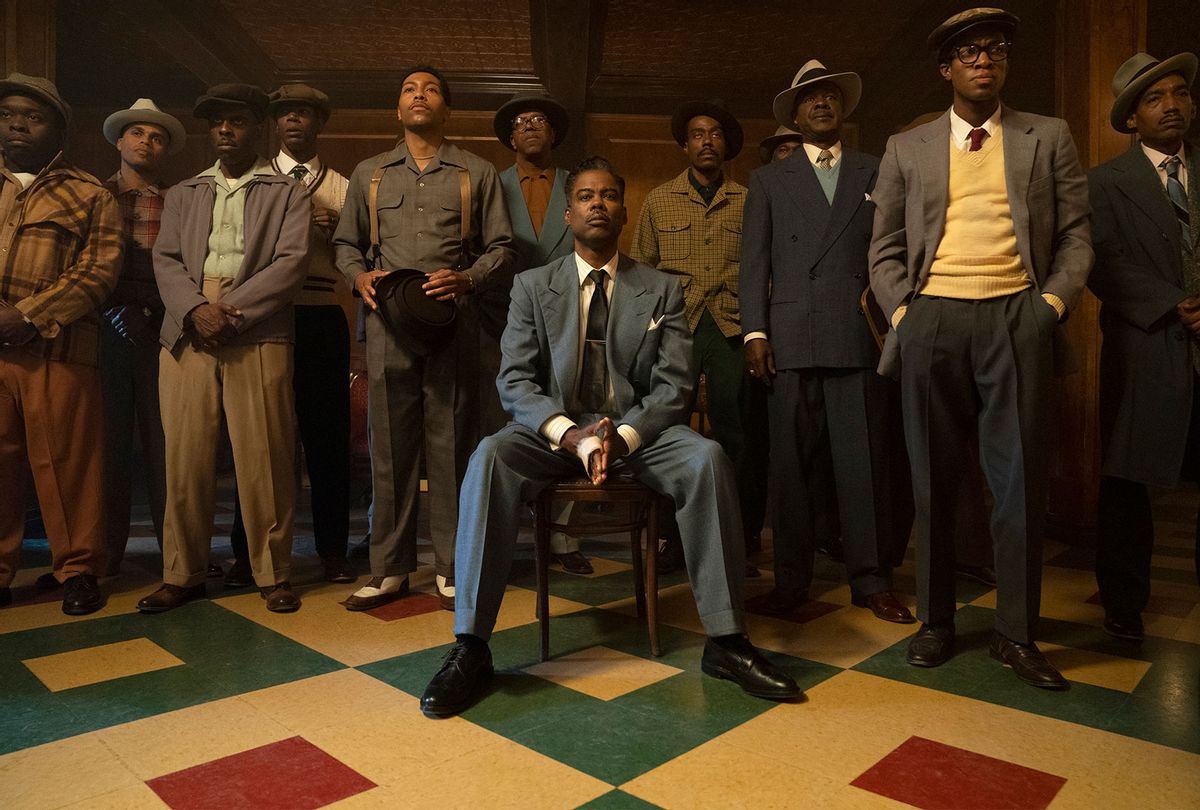 "Fargo" is a narrative landscape chockablock with stories. In the fourth season all the major characters have a parable to share, a historical anecdote to bestow or a yarn holstered and ready to unravel. The story that opens the series quotes from a history report written by Ethelrida Pearl Smutny (E'myri Crutchfield), in which she quotes Frederick Douglass, plainly and without frills.

From there, the dialogue thickens long before the plot follows suit. The new season is an underworld saga about two dueling crime clans from two disparate cultures pitted against one another in Kansas City, circa 1950.

On one side is the Fadda family, an arm of the Italian mob headed by Josto Fadda (Jason Schwartzman). On the other is Loy Cannon (Chris Rock) and his crew, the Cannon Limited, a numbers running and loan shark operation with an eye on expanding its territory. Loy and his right hand man Doctor Senator (Glynn Turman) cut to the chase with one another, but in the face of an adversary or weaker men, they casually launch into any number of tales.

A few words of introduction – the likes of, "Ever hear the one about" or "Are you familiar with" or "Have you ever seen" – are the click-click of hammer being cocked, the sign that we're about to sustain a blast of blather to the face on the way to whatever point the person is trying to make. Soon enough, they're off to the races.

Since the dialogue hits the ear before the season's narrative has a chance to settle into something we can comprehend, I am betting it will be a dividing line between those who saddle up for this new installment of "Fargo" and folks who don't have the energy to devote to so much active listening.

Story is where its creator Noah Hawley exercises his tendencies as a novelist, and the average "Fargo" viewer should know that by now. In his hands, the dialogue in "Fargo" may be as much of a star as the crime drama's actors. Few, if any, of the lines uttered could be characterized as simple; every sentence is a luxuriant expenditure of $10 words. And you're either impressed or charmed by that or utterly driven off before the story really kicks into gear.

The people in Hawley's version of Kansas City's criminal underworld and its adjacent parts are men and women – men, mostly – naturally given to grandiloquent speech and extensive verbosity. Even the episodic recaps are announced as "antecedently on 'Fargo'" because "previously" is . . . basic, I guess. There's a great deal afoot in this chapter, enough to qualify it as a fundamental departure from the previous three.

"Fargo" has steadily wandered farther away from the Coen Bros.' original 1996 story to become less about the odd goings-on in North Dakota than a means of examining the banality of evil and the frailty of human morality. Initial seasons played with our concept of small town America flavored by so-called "Minnesota nice," which each season connected to another in some way that may not be apparent at first. Seasons 1 and 2, which took place in 1987 and 1979 respectively, trace the legacy of a local law enforcement family, the Solversons, through two career-making crime cases.

The third season takes us to another cop shop in another town and presents a story that amply incorporates the perspectives of two cops and a con artist, all of them women. Distinct though each plot may be, they still follow a solidly established formula with recognizable parts: a main story, a B-plot and a C, as well as an X factor that lends a surreal unpredictability to it all.

Locations change, but the one constant is a story that places a crowd of outsized personalities on a collision course instigated by one of the local unsuspecting and meek smallfolk. Hawley's game is to build the tension until everything doesn't necessarily crash but implodes, and where this works best is when the crime is such that an otherwise mild-mannered person drops his or her façade and descends into evil.

Out of the gate, Season 4 deviates from that formula with a story about criminals and crooked cops with no out-of-the-blue inciting incident playing the straw that collapses the camel. Instead, Hawley is endeavoring to tell a localized story about America in general and casting it as, to paraphrase the second episode's title, the land of taking and killing . . . and a whole lot of talking.

The Kansas City underworld has ties to Fargo mentioned in previous seasons, but the only connection to Minnesota is by way of an eccentric nurse named Oraetta Mayflower (Jessie Buckley, recently of "I'm Thinking of Ending Things") who, in the tradition of characters played by Billy Bob Thornton, David Thewlis, and Bokeem Woodbine, slides into the part of this season's random evil.

One must assume that the seasoned "Fargo" viewer is conversant in the mafia movie subgenre, and that makes Hawley's choice to ground the action within that framework a chancy proposition. But this Kansas City season has grander aims than merely this. It's an organized crime fable rubbing shoulders with the story of an angel of mercy serial killer with brief ruminations about the myth of race and assimilation strapped to its ankle.

It's also the first season in which children are prominently featured – as insurance that civility will be maintained, each mob exchanges a son for the other to keep as its ward – and yet, only Crutchfield's daughter is written with a mote of interiority.

This is the general flaw in a season conceived as a platform for Rock to demonstrate his chops as a serious actor: Hawley and his writers dangle a number of ambitious proposals in the beginning that sort of fade out, especially with regard to portraying race in this era.

The counter to this is that "Fargo" isn't designed to be an inquisition about racism in America, but an exploration of cause and effect and the moral trials that result. Loy Cannon and his outfit are slick, organized mobsters representing a segment of the population rarely lionized for their strategic skill or business acumen. At the point in history portrayed here, the "Limited" and the Fadda mafia are both outsiders to the mainstream economy left to cobble together their empires out of ill-gotten scraps. That makes the plot's main thrust one of crime, ambition and consequence, one in which race inevitably plays a role given the era's codified segregation but isn't the main story.

Maybe that gives Hawley a weak out. Maybe it's an acknowledgment that he's already managing so many ideas that if he successfully shepherds them to their intended destination that in itself should be seen as a small miracle.

Either way, Rock commits to his part entirely and with purpose. The performer has made the rounds and gently groused in a number of interviews that serious roles, the likes of which have earned trophies for Denzel Washington, have long passed him by.

Whether Rock has such a part here is open to debate, but he chews every word of every speech and heats up every smoldering silence. Only when Loy is pushed to his emotional edge do the limits of Rock's dramatic abilities begin to show; fortunately that doesn't happen until much later in the season. Long before that Turman's performance proves to be the real stunner, complementing Rock in the scenes they share and elevating the room whenever he appears.

But between serving Rock's character and wrangling the sheer sprawl of the cast, Hawley and the writers have a difficult time adequately servicing any of the roles that aren't played by a name brand actor, be it Rock or Schwartzman, whose besieged mafia son resembles any number of parts he's played for Wes Anderson, or Timothy Olyphant, who in homage to his career-defining role on "Justified," shows up as U.S. Marshal Dick "Deafy" Wickware from Salt Lake, Utah, who is a very polite, by-the-book Mormon, and a racist.

Ben Whishaw is also put to fine use as Rabbi Milligan, the Irish son of a defeated mobster adopted by the Faddas but never fully accepted – a tragic role made for a man whose face wears sorrow as a baseline expression.

Beyond these actors and Buckley's unsettlingly peculiar nurse rounding her Minnesotan O's as if she has a robin's egg nested where her uvula should be, the best the other actors can achieve is a highly noticeable two-dimensionality. That might only matter to viewers who come to a prestige series like "Fargo" and expect every crumb to be detailed just so. But even those of us who find a lot to enjoy in these new episodes will notice that the character development is the equivalent of a sliver of margarine spread over a broad slice of bread: only a few crannies are going to pick up the flavor in that scenario.

And in a few instances that's just fine. A pair of outlaw women constructed as an homage to the principals in "O Brother, Where Art Thou" comes to mind, and Karen Aldridge and Kelsey Asbille play them with a winning zest that injects a terrific amount of fun into a family subplot that otherwise little more than a vestigial limb to the majority of the story. Representing the other side of this coin is Salvatore Esposito's Gaetano Fadda, the crazy-eyed brother to Schwartzman's Josto whose overwrought portrayal of a homicidal maniac distracts and irritates in equal measure.

Previous seasons of "Fargo" achieve a balance between quotable dialogue and surprising action. That former features much more heavily than the latter in this season that slow-walks the narrative toward inevitable death and violence. If you have an ear for logorrhea and a hankering for quirk, these new "Fargo" episodes should deliver satisfaction.

If that previous sentence made you roll your eyes or curse its writer, save your televisual peregrinating for another title. (To put it more simply, you can let this one pass.)

The two-episode fourth season premiere of "Fargo" airs Sunday, Sept. 27 at 9 p.m. on FX and streams the next day on FX on Hulu. New episodes will air Sundays at 10 p.m. on FX.