Will Biden and Trump even discuss the worsening inequality that got us here?

Biden is correct to focus on COVID and health care. But both parties built the edifice of American inequality 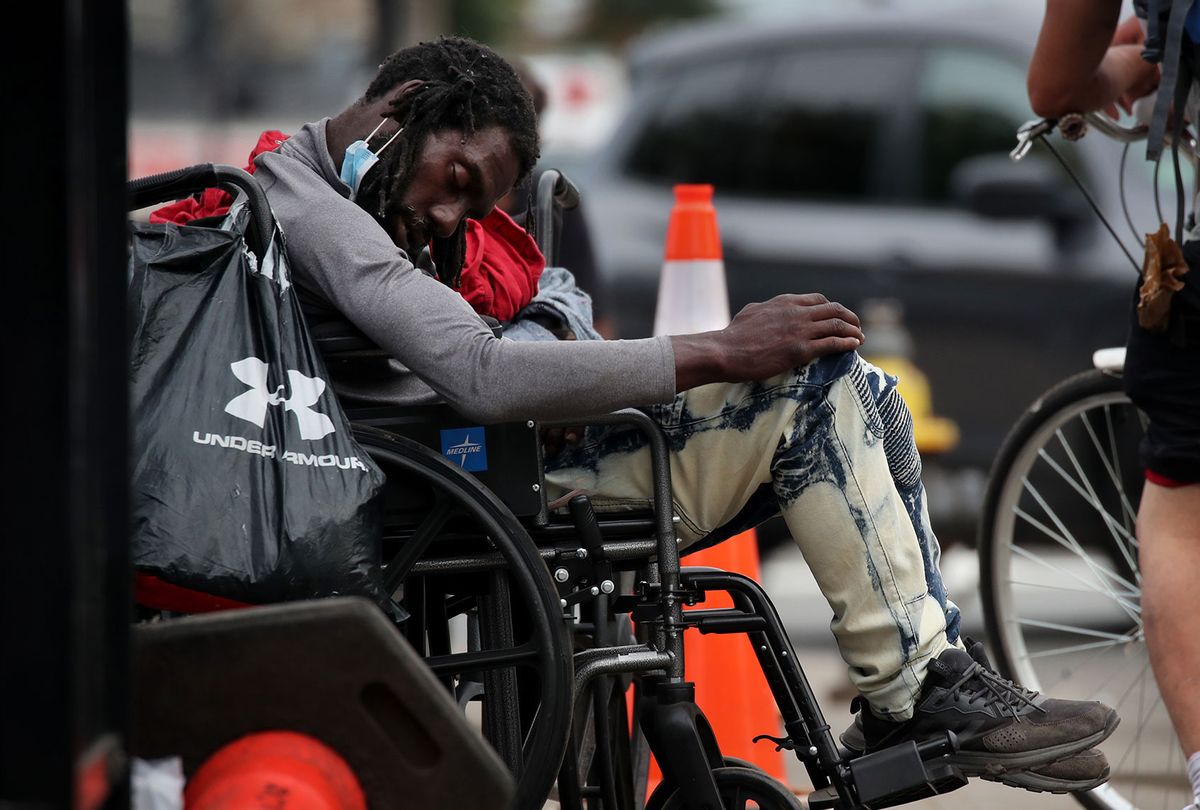 A man rests in a wheel chair outside a comfort station on Massachusetts Ave, in an area known as Methadone Mile, in Boston, MA on September 09, 2020. The area known as Methadone Mile has deteriorated over the past few months. Services are closed, and the homeless and those suffering from addiction have crowded the area. (Craig F. Walker/The Boston Globe via Getty Images)
--

When Donald Trump and Joe Biden take to the debate stage in Cleveland on Tuesday night, they will be standing astride America's great socioeconomic fault line. Since the outbreak of COVID, that has become an abyss into which hundreds of thousands of Americans have fallen and hundreds of thousands more are likely to follow.

Perhaps the most surreal and oppressive aspect of what we are living through is the way the campaign calendar forces us to normalize a day-in and day-out mass casualty event that approaches or exceeds 1,000 American deaths every day.

Predictably, the media's fixation on "getting Trump" is nearing a fevered pitch with the New York Times exposé on Trump's taxes.

But what may be lost on the president's fiercest opponents in the media is that their predilection for fixating on Trump plays into his hands by making the entire election about him. Tactically, that is far preferable for him than focusing on the rapidly deteriorating circumstances of the American people, who are dying in droves as a consequence of his despotic indifference to the ravages of COVID.

It's as if the country's top journalists, who so badly underestimated Trump in 2016, are hoping to expiate their original sin of failing to protect the nation from his unique brand of kids-in-cages tyranny by "finally exposing him."

If you thumb through the index of Bob Woodward's book "Rage," which serves as the definitive tick-tock for Trump's duplicitous COVID response, you won't see any reference to unions like the American Federation of Government Employees or the federal civil servants who have died from COVID.

It was the AFGE that tried to warn early on that Trump's downplaying of the virus would kill their members on the front lines of the TSA, while infecting their families and spreading the virus. All three things happened but this devastating narrative has been consistently obscured by the media's Trump myopia.

If the corporate news media wanted to really expose Trump, they would tell the lost stories of all the dead doctors, nurses, cops, sheriff's deputies, firefighters and other essential workers felled as a consequence of Trump's playing off the nation's 50 states against each other instead of pursing a coherent national pandemic policy.

The really frightening part is that so many Americans know exactly who Donald Trump is and see his evasion of income taxes as a bona fide. To them, he is a champion for upending a corrupt status quo that uses public health prescriptions like mask-wearing as a plot to take away their God-given rights and liberties.

They fully subscribe to Trump's delusional premise that the sooner more Americans are infected with COVID the sooner we will achieved "herd mentality." For these MAGA acolytes, hundreds of thousands of dead Americans, especially if they are the wrong kinds of Americans and likely to vote Democratic, make a fair down payment on a return to prosperity.

Yet, the get-Trump media persists, in the vain hope their latest exposé of him will somehow flip the switch on the ill-informed electorate, who will finally snap out of their Trump trance. Yet what can be observed is that every time they send a Pulitzer-winning jolt through the Trumpenstein they themselves created, he endures.

Even now, the media are playing his game by keeping their lens tight on him. It's an updated reprise of what happened in 2016, where the lack of on-the-ground reporting on the enduring economic dislocation and despair in places like Cleveland gave Hillary Clinton a false sense of security and gave Trump his opening in places the Democratic elites had long ignored.

New Jersey's 2nd congressional district offers a classic example. It was one of 20 districts in the country that voted for Barack Obama both in 2008 and 2012, and then flipped in 2016 to the Republicans, choosing Trump's phony American-dream restoration over Clinton's Obama-era continuity.

These are the places where after eight years, Obama's promises of "hope and change" became stale. Struggling families that had felt uplifted by his election were disappointed by his "recovery" in which they lost their homes even as Wall Street prospered even greater than before.

These congressional districts were made up of 200 counties in states like Ohio, Michigan, and Pennsylvania that had voted for Obama twice, only to turn red for Trump in 2016. These were the places where the working-class voters lived who Michael Moore said saw a vote for Trump as the equivalent of throwing a Molotov cocktail into a corrupt political system that had long ago stopped considering them, much less working for them.

In 2016, more than 750,000 African Americans stayed home ,even after pushing their voting participation to record levels for Obama. At the same time, in states like Ohio, the scene of Tuesday's debate, many white Americans were engaged and energized by Trump's racist dog whistle.

It did not take much to turn our behemoth ship of state, setting her ill-fated course to run aground on the deadly shoals of COVID. You don't have to be a Russian chess grandmaster to skillfully exploit the ignored margins of society, where race or immigration status can determine your fate.

Four years after 2016, this great American fault line endures and has even grown deeper but still remains largely invisible to so much of the corporate media. On one side is the worldview that is framed by commercials for luxury cars, where everyone can always work remotely.

On the other side of this great divide is where America's working families, in places like New Jersey's 2nd congressional district and states like Ohio, reside. These are the places where many people can't easily put their hands on $400 for an emergency. This is the dominion hardest hit by COVID, where people there have no choice but to put their lives at risk and leave their homes as so-called essential workers in the midst of a once-in-a-century pandemic.

This is where the tens of millions of people live whom Donald Trump and Mitch McConnell wanted to force back into the workplace. So they ended the $600 weekly unemployment premium that would have permitted them to stay home and help their kids with the dubious enterprise of "remote learning."

This is the cohort that includes so many whose health had deteriorated for years because of our for-profit health care system, which rations care based on your ability to pay. It was the circumstances of these invisible people that sent America's average life expectancy into decline three years in a row before COVID arrived.

The ruling elites of both parties failed the broad swath of America's working class even as they drowned in student and medical debt. All it took was for Trump to reference them for millions of them to see him as their champion.

On Tuesday night it would be great if the moderators referenced the on-the-ground realities of Ohio's working families whose economic predicament has only become more precarious during the Trump administration.

According to Policy Matters Ohio, a nonprofit advocacy group, Ohio workers who earn minimum wage make 28 percent less than their grandparents did. Consider the findings of the United Way's ALICE Ohio Report which tracks the economic standing of the asset-limited, income-constrained but employed (ALICE) population that struggles week to week to make ends meet.

Before COVID, 39 percent of Ohio's families were either living below the poverty line or struggling week to week to cover the basics. In several counties a majority of the households were in that economically stressed cohort.

According to 2018 data, a single ALICE adult paid $3,024 in federal taxes, and a family of four paid $7,860. Donald Trump paid $750. While the number of Ohio families living below the poverty line has decreased slightly since 2016 the number of ALICE families struggling week to week went up by 46,780.

While Trump can imply that ignoring COVID will return working families to prosperity, it's important to remember that before the pandemic hit, the number of households unable to afford household essentials in Ohio had been growing over time, from 31 percent in 2007 to 39 percent by 2018.

"The pandemic has shown that many ALICE workers are essential, frontline employees," said Dr. Stephanie Hoopes, national director of United for Alice. "It has become exceedingly clear that we need ALICE to keep the economy running and to keep us all safe and healthy. Many ALICE workers have no choice but to work, but do not have basic safety gear to do their jobs safely without risk of contracting or spreading the new coronavirus."

Hoopes continues. "For example, ALICE workers care for our aging and ailing seniors. Yet despite doing physically and mentally demanding work, many ALICE health care workers do not have masks or other Personal Protective Equipment (PPE), placing them, and the families many return to at the end of their shift, at greater risk of exposure."

When you look at post-World War II economic data, what you see are deteriorating circumstances for America's working-class households, decade after decade. It did not matter which political party was in power because they both facilitated a concentration of wealth and corporate power that set the stage for a weakened population that could be eaten alive by COVID.

We closed scores of urban and rural hospitals that served the poor. We unlearned the public health lessons from the last pandemic in 1918 and failed to ensure that we kept a registered nurse in all of our schools.

The elites ignored this fundamental erosion of America's public health well-being, even as they got richer and richer. On the other side of our national fault line, the rest of the nation sank deeper and deeper into chronic disease and addiction while increasingly turning to suicide. All these individual trends were studied and analyzed, but no president and no Congress managed to see what their confluence would portend.

How long can we continue to let our politics be about anything else other than reversing these self-destructive trend lines?