Some families lose health coverage after one jobholder dies. Universal healthcare is the only sane response 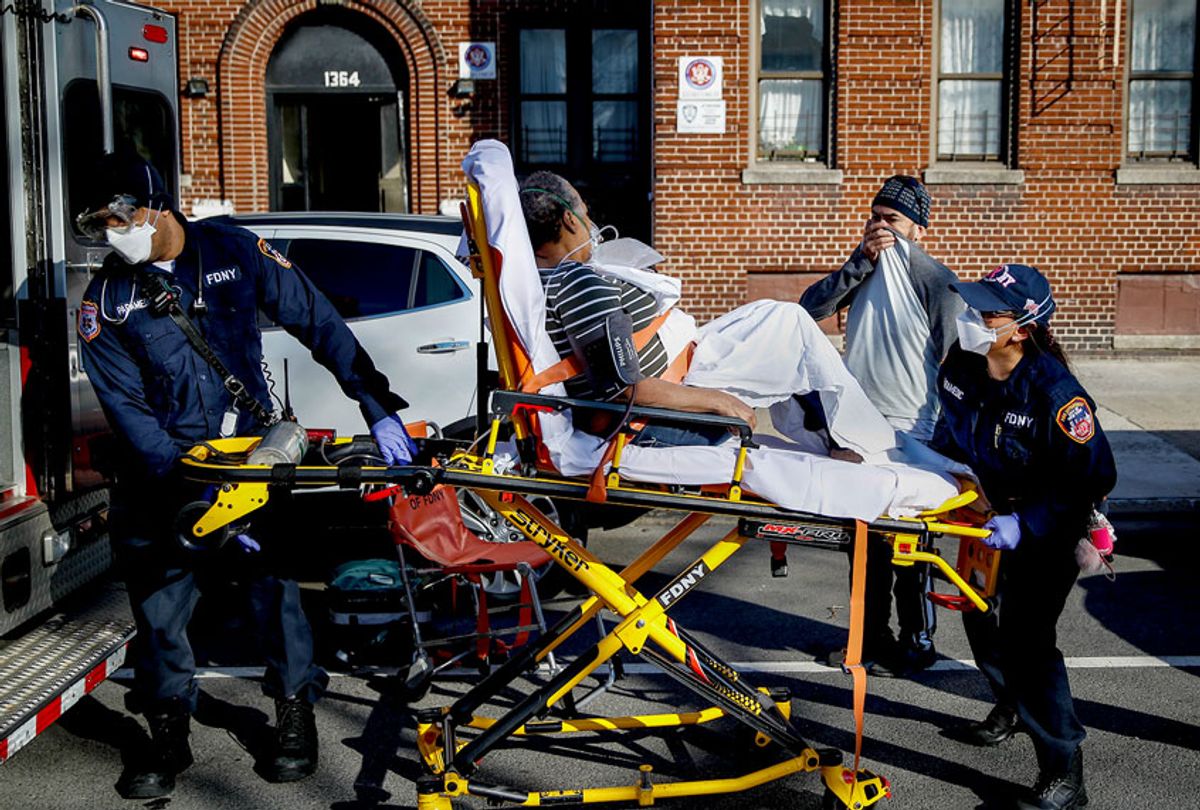 Two months into the pandemic, there's a secondary humanitarian crisis playing out for the families of health care workers, first responders and essential workers who have perished of COVID-19.

Many of these grieving families now face the prospect of losing their health insurance — even as they themselves battle the deadly virus, or live in fear contracting it.

Such is the nature of the United States' patchwork healthcare system, in which an entire family's coverage is often tied to one adult's job — and which may end when one's spouse or parent dies on the job.

Indeed, across the country, the benefits for these surviving spouses and their children vary widely depending on where they live, and the civil service title or job description held by their lost loved one.

In New York City, at least 260 municipal employees have been killed by COVID-19.

The civil titles of those who have died on the job run the gamut from "police detective" to "city driver for the Department of Homeless Services."  Whether it be the municipal FDNY [Fire Department of New York] ambulance mechanic, the school nurse or the fire prevention Inspector, the common thread these workers shared was that for them, working from home was not an option — and they answered the call to come in.

At a recent virtual City Council meeting, NYPD Detective Paul Digiacomo, president of the Detectives' Endowment Association, testified that the pandemic represented "the darkest time in history for the rank of detective" with the loss of five members in just two weeks to a "silent killer" that had "proven more dangerous and deadly than any terrorist attack or any criminal."

In addition to their regular duties as police officers, it falls on detectives to go to every home where there's been a death, document the scene and talk to the family. At the height of the pandemic, the city was seeing as many as 250 fatal cardiac deaths in New Yorkers' homes every day, ten times the normal incidence.

Between the five detectives there are eight kids as young as five-months old. Detective Robert Cardona, a 19-year veteran, had previously fought and won a battle with a 9/11 World Trade Center-related cancer before succumbing to COVID-19.

"Extending healthcare benefits for the surviving families of these five detectives and the families of all other fellow municipal workers who have become casualties in the war against COVID-19, as well as classifying their deaths as line-of-duty deaths, is a moral obligation," Mr. Digiacomo said.

New York City Mayor Bill de Blasio, at the behest of the city's Municipal Labor Council, announced on May 10 the city would, for 45 days, cover the healthcare premiums for the families of city's civil servants who have died from COVID-19.

Much can hinge on that line of duty designation, in terms of the benefits for the surviving spouses and children. Local and state governments, already under unprecedented fiscal strain, may force the families of deceased front-line workers to prove that their brush with COVID-19 was work-related.

Making that case could be further hampered by the lack of testing and contract tracing. Indeed, the civil service union officials whom I interviewed, whose members handle residential remains, believe that these areas are in need of vast improvement.

Moreover, recent medical findings in New York City that a coronavirus-linked syndrome can be lethal for small children has only deepened the dread for healthcare professionals, first responders and essential workers.

The virulent and unforgiving nature of COVID-19 was driven home for members of the FDNY with the April 20 death of Jay-Natalie La Santa, the four-month old daughter of FDNY Probationary Firefighter Jerel La Santa and his wife Lindsey.

Jay-Natalie, who had a heart condition, was hospitalized back in March after developing a fever. NBC News reported the infant had initially tested negative for coronavirus, but, after a week at the hospital, tested positive.

Just about every local newspaper around the country has had a story about a local deputy sheriff, firefighter, nurse, EMT, respiratory therapists, or hospital janitor who died as a result of COVID-19.

Congress is considering several bills to help this workforce and their families, including a bipartisan measure to extend a legal presumption to first responders that their death from COVID19 was line of duty linked. Such a provision, should it be made law, would ensure their families could apply for compensation under the Department of Justice's Public Safety Benefits Program.

"Whether they are law enforcement officers, firefighters, or emergency medical technicians, public safety officers selflessly put their lives on the line every day to protect our communities," New York City Rep. Jerrold Nadler, who chairs the House Judiciary Committee, said in a statement. "During this time of crisis, as the COVID-19 pandemic rages on, public safety officers remain on call 24-7, which puts them at serious risk for exposure."

Yet these first responder provisions won't address other essential workers who have died, particularly those who worked in the health care, transit, utility, food processing and food distribution sectors. Their surviving family members face the same challenges as the first responder families.

It is expected that as many as 40 million Americans will also lose their job-linked health insurance as the country sinks deeper into Trump's COVID-19 Depression.

The reality is, this country can't fully protect itself from something on the scale of this pandemic without embracing universal healthcare. It is just basic public health. You can't let entire ZIP codes of the country become overrun with chronic disease and premature death.

That kind of misery is contagious.

Long before COVID-19 cast its shadow over our threshold, there were warnings on the national dashboard we were headed in the wrong direction. Consider the national life expectancy, which declined three years in a row.

The last time that happened was around the time of the First World War (116,516 American deaths) and the 1918 flu pandemic (which killed 650,000 Americans). That catastrophic loss of life inspired major advances in public health and education that improved our national well-being.

A century later, our pandemic death toll here in the U.S., which approaches 100,000, is the consequence of our pre-existing conditions of greed and scarcity that ration health care based on one's ability to pay for it.

We must have forgotten how our own health and well-being is biologically linked to that of our neighbor.