Vote or die? In its "Pandemic Special," "South Park" presents a mixed message on the election

In its hourlong one-off special, "South Park" has something to say about voting – and it's not entirely optimistic 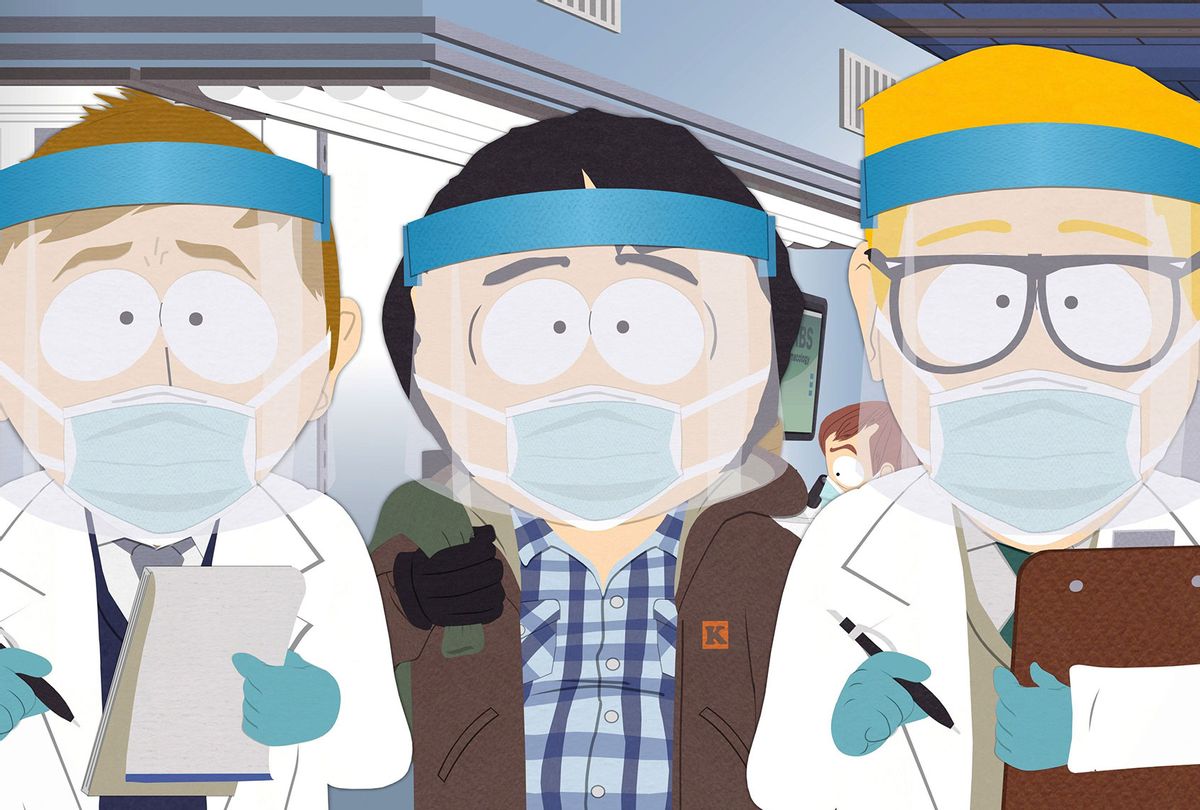 In October 2004 Salon published a conversation between "South Park" creators Trey Parker and Matt Stone and Heather Havrilesky, the site's TV critic at that time. Parker and Stone were promoting "Team America: World Police" but the exchange that garnered most attention was the article's kicker.

Well, in parting, do you have a special message for all those undecided voters out there?

Sixteen years later "South Park" is making election-related headlines with another kicker, this one near the close of "The Pandemic Special."  At the end of an hour in which quarantine tensions exploded into riots, government-sanctioned police murders and a pangolin kidnapping, the townsfolk find a reason to come together . . . and for a moment it looks like Trey Parker, who wrote and directed the special, is about to bestow a mote of optimism upon us, a line indicating some belief that sanity will eventually prevail.

"Now we have hope," says a scientist who is researching a vaccine using the pangolin's DNA. He holds the strange animal in his arms as he addresses the crowd. "We've learned that we might never get back to our old lives. But by working together, we might just find a new way to –"

That's when his speech is cut off by an orange-faced Mr. Garrison stepping up and roasting the scientist, pangolin and hope with a flamethrower. Then the animated series' Donald Trump stand-in breaks the fourth wall to glibly tell viewers, "Don't forget to get out and vote, everybody! Big election coming up."

"The Pandemic Special" marks the 308th "South Park" episode and is its first to run an hour, and between that and its debut in a season when many veteran series are figuring out when, how and if to go back into production automatically guaranteed it would attract an audience.

The episode also is a one-off; Comedy Central hasn't announced a premiere date for the 24th season, and in the final moments of the special Stan Marsh's father Randy announces to his wife Sharon that the entire depressing experience has made him consider only making "specials" from now on.

That off-handed line might tell us something about what "South Park" will look like for the foreseeable future, or it might mean nothing. Mr. Garrison's act of violence, though, is the out-of-left-field shocker generating many a day-after headlines. That's understandable.

The reliable ideology that forms the spine of "South Park" is that Parker and his co-creator Matt Stone aren't on anyone's side – politically, culturally or socially. We used to describe the show as an equal opportunity offender, and maybe that's true in a sense. Where that label falls apart is in the show's recurring proof that it actually has a moral center of sorts; equal opportunity offenders don't tend to care about anyone or anything.

Not so here. "The Pandemic Special" won't be remembered as the finest hour of "South Park," and I say this not as a pun but in acknowledgment that with Comedy Central running through its catalogue, you're more likely to turn on back-to-back repeat episodes that are sharper, more coherent and outrageous than Wednesday night's entry.

At the same time, it's also very much evidence that the show's producers feel as stuck in the mire as everyone else – and they do care. Parker and his team deserve credit for using the hour as a catch-all to poke fun at the absurdity of living our lives through Zoom screens, the bizarre direction that the mask debate has taken, and the vile absurdity of pouring enough funds into our police departments to enable them to afford military-grade equipment while teachers are left to choose between employment and their safety.

The overall message of this episode isn't one of the "South Park" team feeling above it all to the point of comfortably rolling their eyes at madness gripping America. Instead it reflects a kind of frazzled incredulity and disillusionment about where we find ourselves.

The alternate title to "The Pandemic Special" easily could have been "How in the hell did we get here?" except for the fact that "South Park" already knows the answer; Parker and his producers have  chronicled our descent across multiple seasons and lined it up neatly in the 19th and 20th seasons' serialized arcs.

Even so, the attraction to decoding what Mr. Garrison's statement about voting is understandable and a little odd in equal measure considering what else the episode had to say.

If the "South Park" team speaks through its creators, "The Pandemic Special" is both a self-deprecating work as well as a sympathetic one. "These are very serious times, and nobody wants or cares about your special right now!" Sharon Marsh spits after Randy announces his new product in an over-the-top promotion.

As the town's main wrongheaded opportunist and gentleman pot farmer, Randy employs poorly thought-out schemes and spouts platitudes and virtues in the name of drumming up sales for his pot business, Tegridy Farms.

Rarely does Randy find an event, joyful or tragic, that he can't spin into some type of special. His new strain is where the episode's title come from and is a manifestation of corporate greed, tragedy profiteering, and empty signaling from brands. (We also find out that he played a key role in kicking off the pandemic that involves bestiality and a mind-altering substance-fueled bender with Mickey Mouse.)

Following that bit, "South Park" jogs through the land of everything that's sucking right now: Zoom calls. The horror of dealing with wall-climbing children afflicted with cabin fever. Public institutions forcing workers back on the job despite failing to enact adequate safety measures. In the episode's A-plot, Stan, Kenny, Kyle and Cartman all return to school, only to find that their old teachers have quit and been replaced by the town's cops, who are in need of jobs after being defunded.

"I don't want any unnecessary death," the chief of police tells his officers before they enter the classrooms. Of course, the moment a fight breaks out between two white kids, the teacher cop whips out his gun, takes aim and fires . . . at Token, one of the few Black kids in South Park.

Soon after the police force realizes they're not equipped to teach elementary school children math, so they transform the place into a prison.

We expected the eventual rampage the town's police would be called in to quell, although the usage of Mötley Crüe's aggro anthem "Kickstart My Heart" was a nice touch. (Honestly, the song's lyrics rhyme "kickin' ass" with . . . "kickin' ass." It's no "America, F*ck Yeah," but it's close!)

But as on the nose as this subplot is, Mr. Garrison's fiery executive action leaves a bit more open to debate. Lots of people wonder what that turn indicates about whether Parker (and perhaps Stone) have changed their minds about the necessity of voting. Another way to consider the scene is in terms of what they're saying about the integrity of our democratic process, which isn't terribly uplifting.

"South Park" loves to lampoon politicians and celebrities, but it reserves a special zest for lampooning the easily manipulated machinery that props up government and politics. Season 23's finale, "Christmas Special," skewers the righteous celebration of legalized marijuana by having Randy get the town hooked on his new product, "Christmas Snow," a special strain of cocaine-encrusted cannabis.

When the Mayor frets that Randy will get them all put in jail for selling an illegal substance, he tells her not to fret and steams through the process – getting people to sign petitions, making his case before governing body after governing body until, bam, it's the law of the land. Now everybody can get tweaked, and Tegridy Farms can keep making money hand over fist.

The speed from which the taboo flips from vilified and illegal to legal is ludicrous, but in "South Park" such absurdity has always been normal. So when the show's version of Trump roasts a scientist alive in the street, it's just another day in that cartoon Denver town.

Parker and Stone have been describing presidential elections in simple binary terms since 2004 when a character explained that  "nearly every election since the beginning of time has been between some douche and some turd." Every presidential election cycle resurrects this idea, pitting Giant Turd against Big Fat Douche, except with new faces each time. This election no different in that respect.

But I also think Parker's message isn't revealing anything about his or Stone's politics as much as hint that he doesn't have much faith that we're going to vote our way out of this. In short bursts of accelerant and fire Mr. Garrison roasts hope and hard logic into a crisp; in the next scene Randy stares out over his crop as the hills beyond burn unabated.

For the entire episode he's watched businesses once taken for granted close and seen the Grim Reaper nearby; now Tegridy Farms has shut down, and the hooded figure lurks on the periphery of his property line . . . riding a tricycle. Randy's greed has finally gotten the better of him, and now (to paraphrase another rock lyric) the whole world is stupid and contagious.

"I can't take these shutdowns anymore and I'm scared of what it's doing to me," Stan says at one point, going on to confess that he just wants his life back. "The truth is I just want to have fun again."

Don't we all . . . but this "special" doesn't necessarily leave us with the belief that can happen any time soon.