Yale psychiatrist: Debate should never have happened due to Trump’s “mental health”

"We cannot pretend" to have a debate when "management of psychological impairment" is required, says Bandy Lee 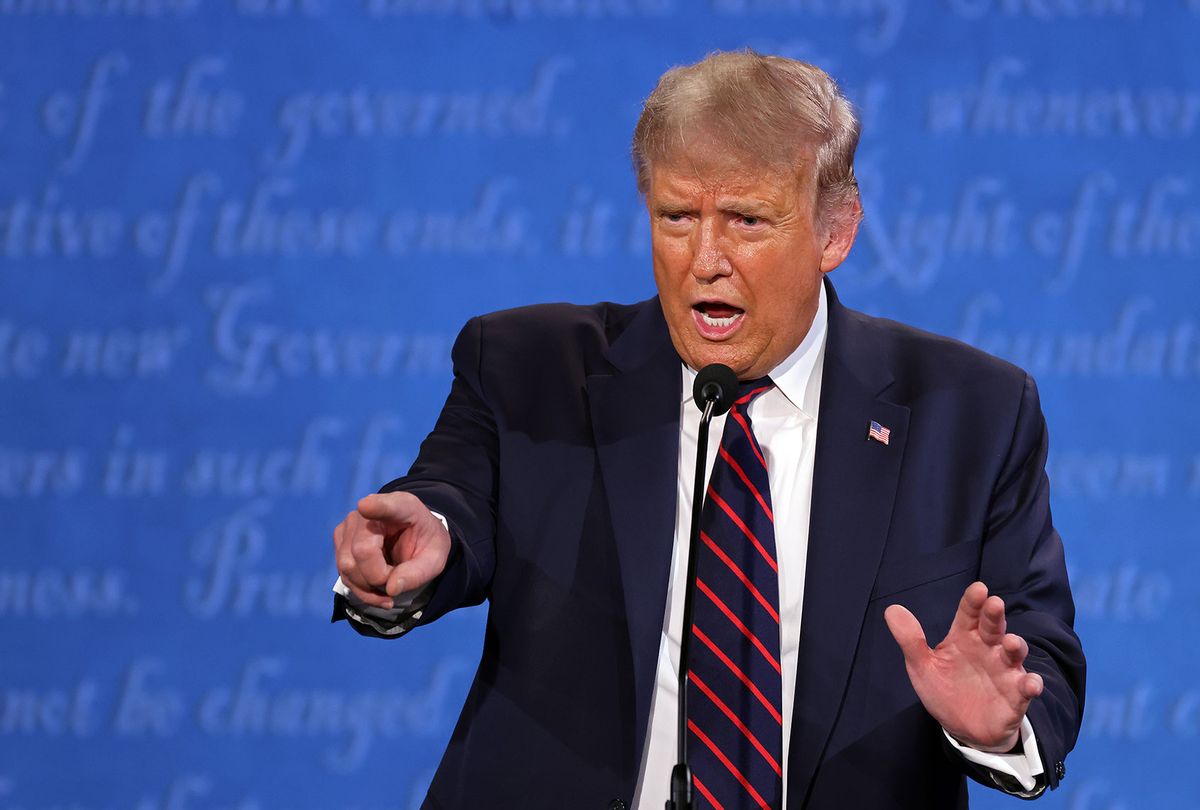 A Yale psychiatrist who has repeatedly raised questions about President Trump's mental health argued that Tuesday's debate against Joe Biden should never have been allowed to go forward.

Dr. Bandy X. Lee, a forensic psychiatrist at Yale School of Medicine and the president of the World Mental Health Coalition, said in an interview with Salon that Trump lacked the basic "mental health" to participate in a presidential debate.

Trump derailed the debate throughout the entire 90 minutes, repeatedly refusing to comply with the rules his campaign had agreed to and incessantly heckling his opponent. The event was universally panned as a "sh*tshow" and "a hot mess inside a dumpster fire inside a train wreck."

Lee, the author of the textbook "Violence" and editor of "The Dangerous Case of Donald Trump: 37 Psychiatrists and Mental Health Experts Assess a President," has led an organization of mental health professionals calling for Trump to be removed from the White House and the 2020 ballot because of his "psychological dangerousness and mental unfitness."  She told Salon that the media's shock at Trump's disastrous performance was the result of a years-long problem that has gone ignored far too long.

"The predicament that we are facing, of being unable to be certain even of a democratic election, is because we have done everything possible to avoid naming the problem," she said. "We saw from Robert Mueller's team and the Democratic House's handling of impeachment that not taking psychological factors into consideration predetermined their poor outcome. This is because psychological issues need to be dealt with psychologically — and we are now gambling with our elections."

Lee said she plans to publish a "Profile of the Nation" on her website to provide a "full psychological profile of Donald Trump in the context of his followers and the nation."

"My 'Profile of the Nation' hopes to provide 'the missing link' that explains why the president does what he does, why he has so tragically mismanaged the coronavirus pandemic, why he stokes racial tensions and national conflict, and ultimately how he is bringing about a near-destruction of democracy," she said. "Knowledge is power, and we need to spread this knowledge."

Trump spent most of the debate heckling and interrupting, mixed with some blatant lying. How would you assess his debate performance?

The huge error was in allowing the debate to happen in the first place. "How was his debate performance?" is the wrong question to start. A debate presupposes mental health. We cannot pretend to have one when management of psychological impairment is what is warranted. The majority of the country may be horrified at what he is doing, but we continue to help the disorder in every way possible by treating his behavior as normal. It applies first to the politicians, then to the media and then to pundits who do not come out and honestly say: "This is beyond anything I have seen and beyond what I can understand — can we consult with experts?" And experts, for a psychological matter, would be mental health experts. Perhaps even specialists of personality disorders or sociopathy would be necessary, given the severity.

Instead, where mental health is concerned, everyone seems to believe one knows all there is to know and that expertise is unnecessary. We have seen what a disastrous difference it makes when we leave pandemic management to random persons' whims, as opposed to pandemic experts — it makes the difference of hundreds of thousands of lives. Problems of the human mind are arguably far more complex than problems arising from a virus. We are not helpless, yet we continue to make the problem worse through the seeming notion that an expert's lifetime accumulation of scientific knowledge and clinical experience do not count. This attitude leaves us in ignorance, and we cannot properly respond to the needs of the situation.

Is there anything Joe Biden could have done differently to counter Trump's incessant attempts at bullying?

Again, we cannot expect non-professionals to handle a person who requires professional-level care. He did as well as anyone could possibly expect. However, because of a lack of knowledge about what exactly is happening outside the realm of rationality, and not having a systematic plan that accords with proven principles of management — which is again an area of specialized knowledge and practice — he could not do what was necessary. As far as Donald Trump's followers are concerned, this was a winner for Trump, not Joe Biden.

What did you make of Chris Wallace's attempts to rein in Trump? Is there anything future moderators can do?

It returns, for me, back to the need for an honest national debate. Ask yourself: How many times have you heard a mental health professional speak about the problems of the president's mental health in the past week, month or year? Yet this is a matter that warrants discussion every day with experts, until it is brought under control. We are currently under enormous danger because of the platform that is provided the president, which he uses daily to fuel conspiracy theories, to bewitch his followers' minds, to exhaust those who would oppose him, and now to subvert democracy itself. It is unreasonable and inapplicable to ask anchors to do the job that has now become a public health problem of such magnitude that all the different disciplines and sectors must step up and collaborate. Without a clear vision of what is happening, this is nearly impossible.

Treating a psychological issue as a purely political one is the first problem. This was the basic message when more than 800 mental health professionals signed a petition during impeachment, asking that the speaker of the House consult with us. We predicted that as long as the psychological factors were ignored, any procedure would fail. This was also the underlying message of over 300 pages of letters, petitions and conference transcripts which my organization has recently published in "Documents" — people can see how we predicted, almost with uncanny timing, what would happen if we failed to contain the psychological dangers of the president. It has now spread into social, cultural, civic and geopolitical dangers, just as we said.

Of course, leading this trend was the American Psychiatric Association's distortion of ethics. The reinterpretation of the "Goldwater rule," as happened at the onset of this presidency, has been exceedingly harmful, in my view, for silence in the face of grave dangers facilitates conditions for atrocities. Last month, we created a blow-by-blow account of how we exactly foretold the president's mismanagement of the coronavirus pandemic, based on his psychological makeup. We could not effectively convey this in advance, because the public was led to believe that the "Goldwater rule," which is a guild rule applying only to 6% of practicing mental health professionals, was universal, or worse yet, some kind of law. But in truth, to change a guideline whose purpose is to protect public health to protect a public figure at the expense of public health violates all core tenets of medical ethics.

I predicted early on that this distortion to suit this administration would cause more harm than what the American Psychiatric Association's counterpart, the American Psychological Association, did with its ethics guidelines to facilitate and design programs for torture. This is because any stifling of speech, let alone education, regarding such dangers to society was bound to cause far more devastating harm than 1,000 torture victims, as bad as that is. More than 200,000 deaths later, I think this will be hard to argue. There is a reason why thousands of mental health professionals have joined us at the World Mental Health Coalition to step up where the American Psychiatric Association has failed in leadership. We call on the APA to retract its "gag order" and to apologize for misleading the American people and the media.

Trump's ability to impose his will on the debate allowed his lies to be aired to millions without any fact-checking or response. Are you worried that events like this could "normalize" the alternative reality Trump is trying to create?

Absolutely. What we see is a "bulldozing effect" of mental pathology. The drive for psychic survival ingeniously senses what it needs to get ahead, through illegitimate means. This primitive and destructive force is a form of disorder that has no place in politics.

A lot of people seemed to turn off the debate. It was almost traumatic. How does watching a debate, or three, like the one on Tuesday, affect the general electorate's psychology heading into the election?

This has been one of the hardest things to watch as a mental health professional. Unprecedented rises in stress and anxiety, including retraumatization, have been well documented far before the disastrous mismanagement of the pandemic and the economic devastation that followed. The psychological toll on the population is immense, and we have not seen the tip of the iceberg of suicides, homicides and "deaths of despair" that will be a direct consequence of this presidency. We now have considerable research evidence to be able to make the links and to predict and prevent such harm, and yet we have not made use of any of that knowledge. It is time for this to change.