Salon spoke with Polina Chesnakova about her new cookbook "Hot Cheese" and got the recipe to her ooey, gooey pasta 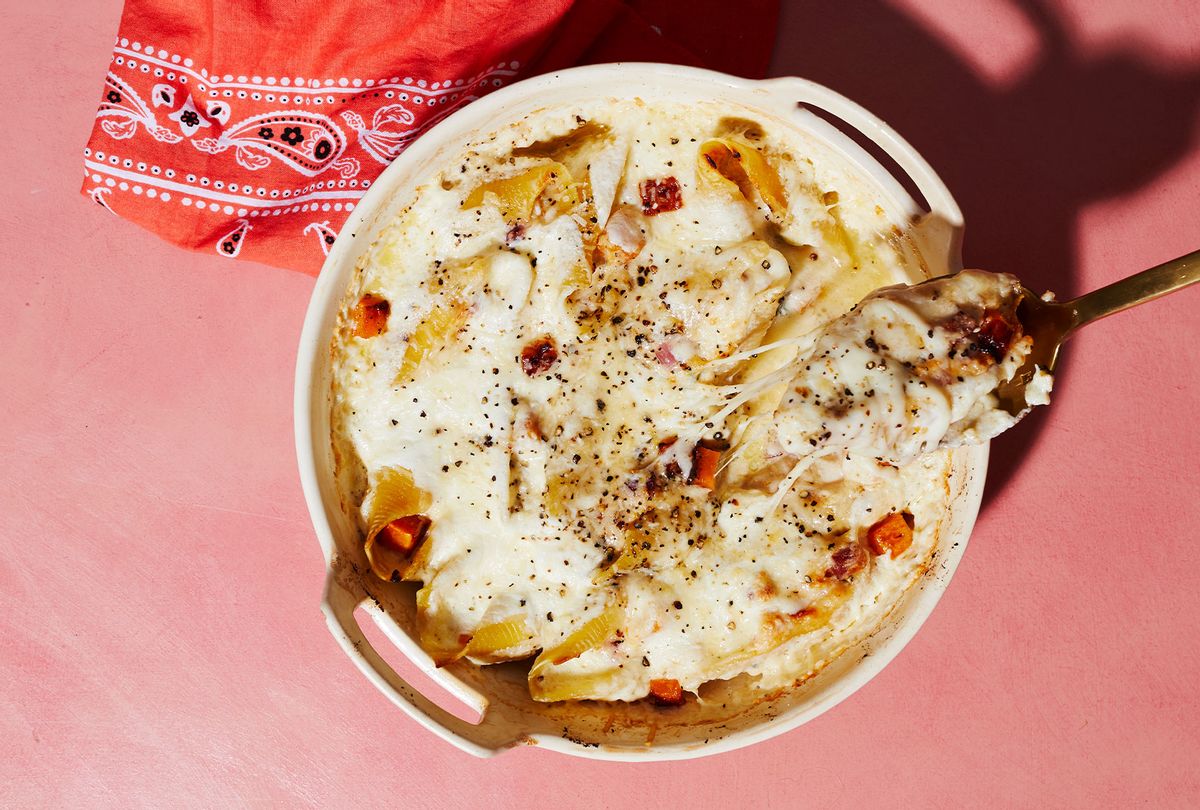 The title of Polina Chesnakova's new cookbook, "Hot Cheese," immediately brings to mind some of the most comforting dishes on the planet: bubbling macaroni and cheese, savory enchiladas and crisp and creamy grilled cheese sandwiches. That's the beauty of the concept.

As Chesnakova says, "you can find melted cheese in almost every cuisine...because it really does appeal to everyone."

She spoke with Salon about how the book came together, her tips for making a better grilled cheese sandwich, her thoughts on fondue making a serious comeback — and shared her recipe for Butternut Squash, Ricotta, Pancetta Stuffed Shells with Baked Burrata.

What drew you to the idea of doing a cookbook centered on cheese?

Prior to working on the book, I was writing for "Culture" magazine. I had started out as an intern with them and after I finished my internship, I continued to write a lot of their cooking features because I had a culinary background. I loved cooking with cheese — not just eating cheese on cheese plates, but cooking with it. A few years ago, Chronicle found my work through "Culture" and they actually came up with the idea of "Hot Cheese."

They wanted to see if I was interested in the idea, and I was, so I kind of took it and ran with it. I think at the end of the day, for me, hot cheese just has a sort of magic to it. Something about it is universally appealing. The number one response I received when I told them that I was working on a hot cheese cookbook was like, "Oh my gosh, who doesn't love hot cheese?" I've lost count of the number of times people have said that.

So, I really think there's something exciting about when you apply heat to cheese — there's always that moment of suspense before it hits the table.

Well, and to that point of hot cheese having a universal appeal, this book features a really diverse mix of recipes from all across the globe. Was that intentional?

Very much so. You can find melted cheese in almost every cuisine and, again, it's because it really does appeal to everyone. There were a handful of recipes that I just kind of grew up eating like the Georgian Khachapuri and the Russian French-style Chicken. My family is from the Republic of Georgia and Russia, so I knew immediately that I wanted to include those recipes, but then I just kind of looked across cultures just because I wanted to make the book inclusive and also exciting for folks. I wanted to  expose them to new ideas of eating cheese and combining ingredients that they normally wouldn't have thought, so that was definitely intentional. Once I started researching, I found hot cheese in almost every cuisine and it was hard to narrow it down.

So, I have a couple specific questions based on the recipes in your book. First up, tell me about some of your tips for making a better grilled cheese? I think it's something that people are making a lot right now because it's both simple and comforting.

I would say for one, definitely, smear the outsides with melted butter or mayonnaise to get that beautiful golden-brown crust. If you look at the recipe, I use mayonnaise because it has a really nice tang to it. Not only is it delicious on its own, but it helps cut through the richness.

I would also tell people not to be afraid to play around with different cheese combinations where you use a mixture.

Right, because you get the sharpness of the cheddar and the nuttiness, but then you've got the salty-sweetness of the parmesan. They kind of play off  each other. Definitely if you get a really good cheddar, it'll be delicious on its own, but when you combine it with another cheese, you can really elevate it.

And I'd also say, definitely invest in the highest quality cheese you can — because the cheese is the star of the show.

Something that struck me about the book is that you have a section dedicated to fondue. Do you think fondue will ever make a comeback once we can get back together in groups again?

You know, I obviously wrote the book pre-COVID, and so many of these dishes are meant to be shared. There's a whole chapter devoted to gathering around the table and getting people to crowd around and eat together. So it's interesting to think about that in the context of how social distancing is the norm now.

But you know, you don't have to have a part of six to eight to enjoy fondue. For the Swiss, it's like everyday food. You go skiing, then you have it, and you just really need two or three people to really enjoy it.

And this winter, we're going to be home more than evry, so why not do something new and venture from the norm and do fondue? The process of making it is really fun and it's also really fun to kind of figure out and put together all the accoutrements and just create a spread. I feel like you can't go to a party now without a cheese plate. People have a lot of fun picking out the cheeses and also the different things to go with it, so people can have the same fun with fondue.

People are kind of flocking to comfort food right now, and for a lot of people that means cheese — do you have two or three favorite recipes from your book would you recommend?

Personally, the Stuffed Pork Tenderloin with Shallots, Apple and Fontina — to me, it screams autumn for me and it's so comforting. It combines all of my favorite flavors. I also love the Russian French-Style Chicken. That is a dish that I grew up with my mom making all the time when we had guests. But it's just so easy to put together and it's so delicious. I also love the Penne alla Vodka with Sausage and Smoked Mozzarella.

Another one of Chesnakova's favorite recipes for fall is her Butternut Squash, Ricotta, Pancetta Stuffed Shells with Baked Burrata. As she writes in "Hot Cheese," when torn over pasta and baked, Burrata — essentially mozzarella stuffed with curds and cream — "can transform into an effortlessly melty and gooey sauce.

2. On a large baking sheet, toss the squash with the oil and season with 1 tsp of salt. Spread evenly on the sheet. Bake for 25 to 30 minutes, or until fork tender and lightly browned. Let cool.

3. Meanwhile, bring a large pot of water to a boil over high heat and salt generously. Add the pasta shells and cook according to the package directions until al dente. Drain and let cool completely. Set aside.

4. In a large skillet, cook the pancetta over medium heat until the fat renders and the pancetta is golden and crispy, 6 to 8 minutes. With a slotted spoon, transfer the pancetta to the prepared plate. Discard all but 1 Tbsp of the fat.

5. Add the red onion and a pinch of salt to the same skillet and cook over medium heat, stirring frequently, until the onion begins to soften, about 5 minutes. Add the garlic and cook for 1 minute more. Add the wine and deglaze the pan, stirring to scrape up the browned bits from the bottom of the skillet. Cook until the liquid evaporates, about 2 minutes. Remove from the heat and set aside.

6. In a medium bowl, mix the ricotta with the heavy cream, sage, half of the Parmesan, and lemon zest. Fold in the pancetta, red onion, and butternut squash. Season with salt and black pepper.

7. Butter an 8 by 11 in [20 by 28 cm] baking dish. Stuff each pasta shell with the filling and snuggle the shells into the baking dish. The assembled dish can be wrapped in plastic wrap and refrigerated for up to 2 days.

8. Cover the dish with aluminum foil and bake for 20 minutes, until cooked through. Remove from the oven and remove the foil. Tear the Burrata into pieces over the dish, allowing its creamy interior to spread evenly over and around the pasta. Sprinkle with the remaining Parmesan and season with black pepper. Return to the oven and cook until the cheese is melted, about 10 minutes. Serve immediately.